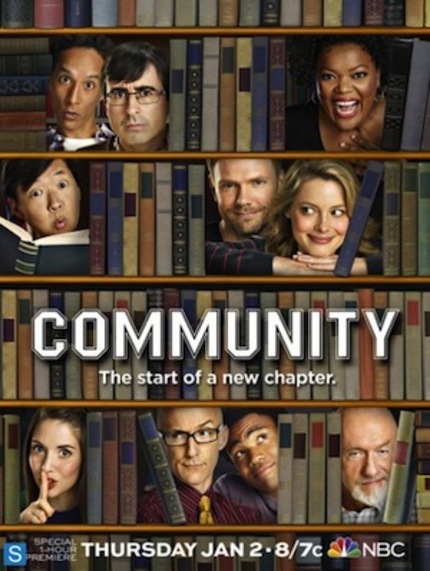 When season 5 of Community was announced without Chevy Chase and with a mid-season departure for Donald Glover, plus the fact that Joel McHale's Jeff Winger had graduated last year, creator and recently reappointed showrunner Dan Harmon certainly had his work cut out for him. The trailer for the season premiere plays as such like a sitcom (in this case one called Mr. Winger), which is something Community has done really, really well in the past, because well, it is Community, after all. It's charming, it plays it relatively safe and appeases a lot of fans' concerns on how the season would be presented, and that's as this: After the failure of his own law practice, Jeff returns to Greendale as a professor. It's a time honored twist of a trope (as well as an obvious meta parallel with Harmon himself) and should we roll our eyes at such a thing, worry palpitating in our hearts, well... Abed says what many of us are thinking. And yet, one thing that I have noted about Community before is that it kind of reinvents itself every season, for better or worse. Though this little look makes it look, and feel, better.

I do wonder why and how everyone else (minus Chase) is still at Greendale after a seemingly good amount of time has passed, but Harmon will no doubt address that right off the bat. One thing to note from that poster is that John Oliver will be returning as Professor Ian Duncan, and apparently billed in the cast, as will Jonathan Banks, aka Mike from Breaking Bad, which is, well, all kinds of excellent.

Community returns for a 5th season on NBC January 2nd. And yes, I will be reviewing this season.