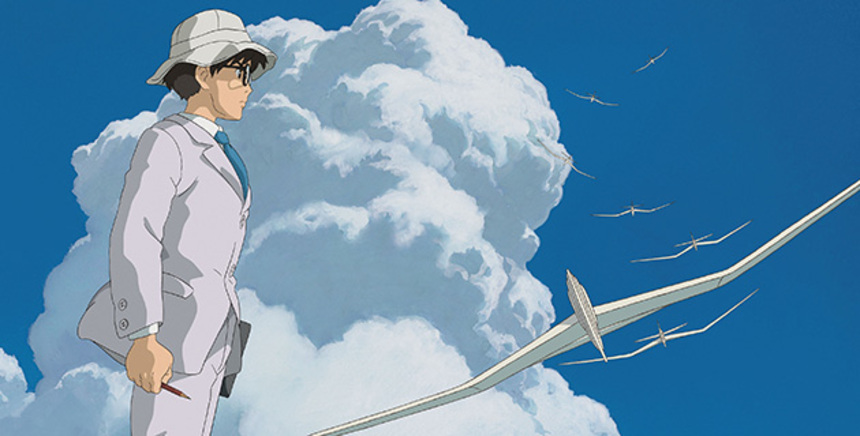 Even as it was earning the Best Animated feature accolade from the Boston Film Critics Society over the weekend, The Wind Rises continued to be dogged by the same controversy which has trailed it since its release back in Japan. Specifically, what animator Miyazaki Hayao is calling his final film is being challenged as doing some excessive flag-waving for WWII Japan or not being patriotic enough according to some netizens back in the director's native country.

Consider Village Voice critic Inkoo Kang in the former camp, calling Miyazaki's lyrical drama about the engineer of the Zero bomber as "morally repugnant." Some choice quotes from Kang:

The Japanese Imperial Army killed 30 million people -- a fact that is barely alluded to by the film.

As you may know, its most egregious offenses during WW2, which include orchestrated mass rape, slave labor, and medical human experimentation on live and conscious human beings, are not taught to students, nor are they mentioned in textbooks.

Kang continues describing the film as a symptom of the willful amnesia of Japan when it comes to the atrocities they committed throughout the Pacific theater of operations during the war. This is true: it's a curious 180-degree flip from Germany which holds the crimes of the Reich as so culturally toxic that most conversation about it is verboten. The Japanese, meanwhile have crafted a counter-narrative where a kind of denialism has infected teaching of their own role in murdering and enslaving their neighbors in the Pacific.

In his review, our own Christopher O'Keefe largely agrees that The Wind Rises isn't especially concerned with the purpose the film's protagonist, Horikoshi Jiro was building for Mitsubishi for the war effort:

The film attempts to skirt the topic of the war with characters insisting their ambitions are only in designing beautiful planes, however there is no ambiguity in what these planes were used for. A touching romance helps lend the film a softer edge, although I couldn't shake the feeling that there was something off about a film on the life of the man who designed a plane for the Japanese Imperial Army, no matter how innocent the intent (Ghibili's or Jiro's).

Is it the responsibility of the film to address the Japanese atrocity in the war? And when assessing a film's themes, how important is it to look at what's on screen in the context of the filmmaker's greater body of work? While I'd argue from my own viewing that Miyazaki gently decries his country's actions, making them the center of the film is sort of beside the point (and kind of ignores decades of the director's own full-throated attacks on empire and war).

The Wind Rises is largely about the impulse to create, the curious mix of inspiration, ego, and competitiveness that compels geniuses to make something. And when we look at Jiro, he's creating at the expense of his life, of a family, and knowing that what he's making will be used in war (the fantasy sequences with aviation pioneer Count Caproni make the point that as engineers, their creative impulse is apolitical, even if their creations are not).

As a flimgoer, is it your responsibility to understand the context of The Wind Rises? Certainly, if this were his first or second film, the themes would be obfuscated by history, but Miyazaki has built up a body of work critical - if not directly - of expansionists and warmongers. Even within this film, one of Jiro's first conversations rejects the idea of violence as a remedy (this after our protagonist proves himself capable of violence). Like magic in Howl's Moving Castle or the mechanical men of Castle in the Sky, or even the massive sand creatures of Nausicaa, Miyazaki litters his fiction with wonder being subverted for violent aims and it's clear from the work that he is wounded by this.

Jiro is something of a colder character, and lacks the outrage of the heroic leads of those earlier films. If fact, Jiro is pointedly unheroic: his life is small, he's a cog in the war machine, guilty of wanting to create something regardless of its aim. We can indict him for that and he does suffer (perhaps not as Ms. Kang would want him to). I can respect her moral outrage at Japan's atrocities (Ms. Kang's home country of Korea was one of that nation's victims), but I would argue that Mr. Miyazaki shares it and has been sharing it for decades through his films.

As his final work, it's easy to see what might have attracted Miyazaki to Jiro, a character we were told by a Studio Ghibli rep before the screening is based on not only the real-life Horikoshi Jiro and novelist Hori Tatsuo, but on Miyazaki himself. "To what ends are our creative impulses employed," the film asks quietly, while celebrating the inner life of the creator. The tragedy of Jiro's work serving a grotesque engine of war is what makes this beautiful story all that more poignant.

So what say you? What is the responsibility of the film (and filmmaker) when it comes to representing atrocity and horror in their art? Is The Wind Rises in fact, an immoral film? Or is it something more complex and challenging?