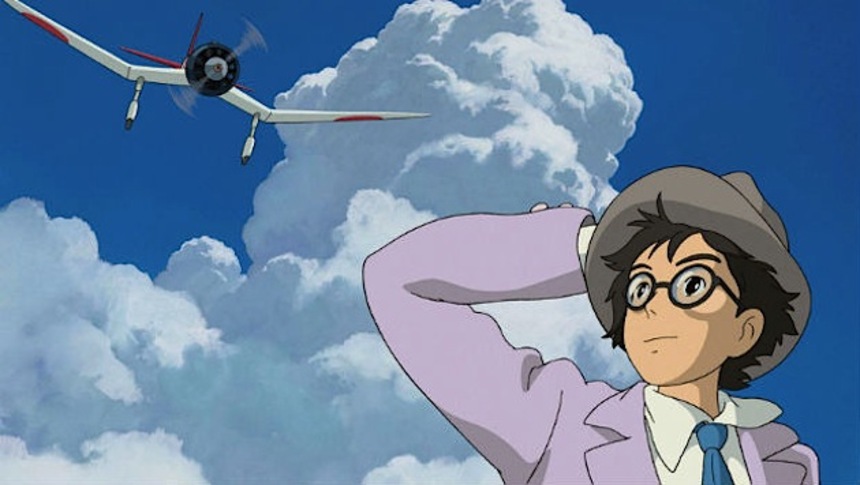 Anticipation levels are always high with the release of a new Studio Ghibili movie, and even higher when the director and writer is the father of the company and man behind its best works, Miyazaki Hayao.

While Miyazaki's previous two works, Howl's Moving Castle and Ponyo contained fantastical elements and were based on story's for children, The Wind Rises (aka Kaze Tachinu) is a fictionalized biography of engineer Horikoshi Jiro, who designed the Zero fighter aircraft, which was devastatingly effective in the early days of World War Two. As a result of its 1920's/30's real world setting and overtones of the coming war it is stylistically reminiscent of Takahata Isao's Grave of the Fireflies, though it's not quite as harrowing as that masterpiece.

The film opens with Jiro as a young boy who dreams of flying, and we follow him as he moves away to study engineering and eventually enters the Mitsubishi Company getting the chance to fulfill his dream of designing planes.

It's hard to think of something original to say about the animation, it's as beautiful as Ghibili's work always is. The film is instantly recognizable as a Ghibili production, especially in the character design and attention to detail. Swirls of smoke and dancing shadows are some of the neat touches that bring these pictures to life. What is perhaps unique is the extensive use of long shots to capture a single character surrounded by a mass of green or a clear blue sky or a train hurtling through the countryside. A stunning sequence of the 1923 Great Kanto Earthquake and panoramic shots of cramped and cluttered wooden towns, really give the film an epic quality and anchor it all so firmly in its time and place. The painted backgrounds in these sequences and throughout the movie are simply beautiful, especially when seen on a huge cinema screen.

Miyazaki has a well documented interest in aviation and it's visible all over his films, from the flying machines in his early hit Laputa (Castle In The Sky), to the sea-planes of Porco Rosso and the little boy with his pilot dreams in Kiki's Delivery Service. Having had so much practice it's no surprise that the flying sections in The Wind Rises are some of the most visually impressive, especially when reality is blurred as Jiro's mind slips into fantastical dreams of flying.

This film, despite all the visual similarities, is very different from Miyazaki's previous efforts. Basically the story is of a man in a company who works very hard. The film works best for the first hour, with Jiro as a boy and then a young man where fantasy and reality are mixed in his innocent dreams. We see as he soars through the air and is guided by conversations with his hero, Italian designer Caproni. Even in these sections the shadow of war is a dark cloud on the horizon. One of Jiro's dreams is interrupted by a squadron of shapeless black monsters attacking his aerial adventures and from this point on the military presence increases.

Despite the frequent flights into fantasy The Wind Rises is a film very much bound in reality, which may make it a struggle for younger audiences as the subject matter is fairly serious stuff and it gets quite wordy later on. It also features levels of smoking which would put Don Draper to shame. The film attempts to skirt the topic of the war with characters insisting their ambitions are only in designing beautiful planes, however there is no ambiguity in what these planes were used for. A touching romance helps lend the film a softer edge, although I couldn't shake the feeling that there was something off about a film on the life of the man who designed a plane for the Japanese Imperial Army, no matter how innocent the intent (Ghibili's or Jiro's).

The Wind Rises has the feel of a historical biography which could very easily have been made as a live-action feature. It's hugely impressive that such a film could be made on this scale, and Studio Ghibili is perhaps the only company who could, or would, even attempt it. With this being such a unique feature for them it will be interesting to see where the film eventually ends up on the list of the studio's best. This is an extremely interesting film and a bold move for the animation studio. The story itself could have been made in many different ways, but never would have looked as stunning as it does by Miyazaki's hand.