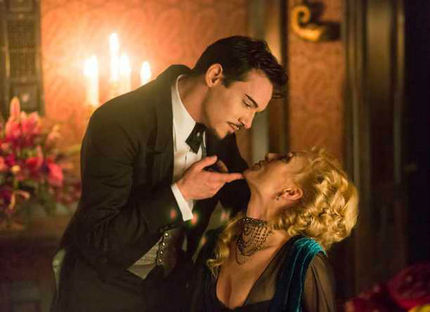 Posing as a rapacious and ostentatiously wealthy American, Dracula stalks the streets of London in 1896, exacting bloody revenge against high-minded and arrogant British titans of industry.

The American TV series Dracula debuted this past Friday evening with decidedly posh settings alternating with threadbare backlot streets. It appears that much of the budget was allocated to resplendent Victorian costumes, which helps fix the characters in an upper-class atmosphere of pomp and privilege. Into the stultifying air strides Alexander Grayson (Jonathan Rhys Meyers), a brash entrepreneur who boldly makes a business proposition to two pompous tycoons, who promptly reject his offer and put him in his place as an impolite rapscallion.

Grayson, as we've seen in the opening scene, was brought back to life in Eastern Europe 15 years before, thanks to a bloody murder committed by a mysterious figure. Now, with trusty assistant Renfield (Nonso Anozie) at his side, Grayson introduces himself and his new home to upper-crust British society -- his ballroom resembles the gigantic lobby of a major railroad station -- along with startling wireless technology that powers a thousand lightbulbs, at least for a few moments.

Soon thereafter, the businessmen begin to die in very bloody fashion, references are made to a not-so-mysterious "Council," Jack the Ripper is outed as a vampire, Grayson / Dracula flashes back to a memory of the love of his life being burned at the stake, a memory prompted by the appearance of Mina Murray (Jessica De Gouw), a lady whose own lover is Jonathan Harker (Oliver Jackson-Cohen), a newspaper reporter, and Abraham Van Helsing (Thomas Kretschmann) is a college professor with a hidden agenda. We also meet Mina's best friend Lucy Westenra (Katie McGrath), and Lady Jayne Wetherby (Victoria Smurfit), whose marital status changes drastically during the episode.

As with nearly all first episodes for network television, there's a mad rush to give each series regular a moment to make an impression. Dracula devotees will appreciate most of the key characters from Bram Stoker's novel being name-checked, though their motives are different and their place in the overall narrative not yet revealed.

A battle between Dracula and a nemesis takes place on a rooftop, punctuated by shots of the legendary vampire posing smartly as he whirls through the air. The lighting of the wireless bulbs in Dracula's giant ballrom, contrasting with the sweaty industrial works necessary to make it happen, is nicely handled. The talk-talk scenes are delivered crisply by the cast, led by Rhs Meyers in fine, seductive form.

Cole Haddon, credited as the series creator, previously wrote a film treatment / graphic novel titled The Strange Case of Hyde, which bespeaks his interest in classic characters. Multiple producers are on board, including Gareth Neame (Downton Abbey) and Harley Peyton (Twin Peaks), as well as Rhys Meyers. That suggests a wide variety of sensibilities at play, which could either undermine or enhance the kind of surging violence and simmering carnality that is at the heart of Dracula's enduring appeal.

Whose sensibility will win out? On the basis of the first episode, which suggests an arch Downton Abbey with capitalist-hating vampires, I'm sufficiently intrigued to watch the next five or six episodes.

TV Beat is a column on small-screen entertainment.

Do you feel this content is inappropriate or infringes upon your rights? Click here to report it, or see our DMCA policy.
Bram StokerCole HaddonDraculaJonathan Rhys Meyers