Review: BIRTH OF THE LIVING DEAD, A Great Doc To Revive And Learn More About Romero's 1968 Classic 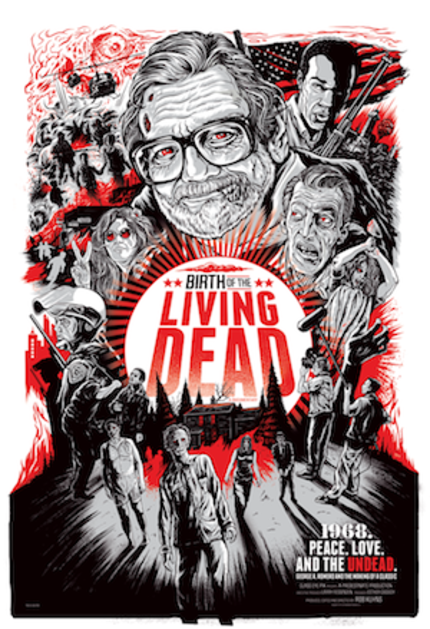 While hard-core fans of George A. Romero's Night of the Living Dead might not learn anything new with Rob Kuhns' 75-minute doc Birth of the Living Dead, dare I say anyone with an interest in filmmaking will have a great time watching it.

For connoisseurs, Kuhns offers a bunch of interviews with fellow experts who vividly revive the quintessential zombie film, while for newcomers there's a detailed account on how Night of the Living Dead was made and the impact it caused, with the man Romero himself open to tell his stories.

Birth of the Living Dead is, at first sight, a making-of documentary, beginning when Romero was doing commercials in Pittsburgh together with people that eventually helped, in one way or another, for the creation of the 1968 classic. It offers a pure guerrilla filmmaking tale with Romero recalling the pre-production and the filming, all adorned with a series of animated scenes by Gary Pullin (Ghoulish Gary), which bring freshness to the screen.

The doc lacks interviews with actors or crew involved in the shooting, though Romero never forgets them and ultimately their recognition is intact. Aside from Romero's, the film's original interviews were made to Night of the Living Dead enthusiasts, such as Larry Fessenden and Elvis Mitchell. They never hesitate when it comes to remember the film. It is clear that Fessenden, for instance, has seen it countless times as he can recreate sequences exactly as they are.

Certainly, if you haven't seen Night of the Living Dead you don't want to watch this doc first as everything, including the (brilliant) ending, is explicitly discussed. For moments, Birth of the Living Dead gets too descriptive but it is fun to witness the aficionados' excitement when talking about Romero's film and, after all, they also give us personal experiences (Mitchell remembers how it was watching it as a kid), context and good film analysis.

The late Duane Jones' character Ben is especially explored and here's the deal: you can find elsewhere, say other documentaries on the subject, or reviews, discussions of what it meant to have an African American protagonist like Ben back in the late sixties, nevertheless Birth of the Living Dead offers such a fun and complete revision that's just impossible to dismiss as "something we have seen before." We get to fully understand the context and we do it smiling, thanks to, for example, of the awesome connections drawn between Ben, Sidney Poitier (In the Heat of the Night, Guess Who's Coming to Dinner) and the blaxploitation leading characters such as John Shaft.

Birth of the Living Dead is terrific for why and how the mentioned zombie flick got huge. If you don't know much about this, prepare to be truly surprised and, why not inspired... since this particular story is pretty neat, and is perhaps the best in terms of influential guerrilla filmmaking. It is no doubt a doc filled with nostalgia evoking the times of midnight movies and even Roger Ebert's film criticism. In the end, Kuhns' love letter to Romero's masterpiece is a welcome and fresh addition to our history of the modern screen zombie.

Birth of the Living Dead is available on VOD and opens in select US theaters on October 18.

Birth of the Living Dead

Do you feel this content is inappropriate or infringes upon your rights? Click here to report it, or see our DMCA policy.
Birth of the Living DeadGary PullinGeorge A. RomeroNight of the Living DeadRob KuhnsFred RogersH. Rap BrownMark HarrisDocumentary

More about Birth of the Living Dead