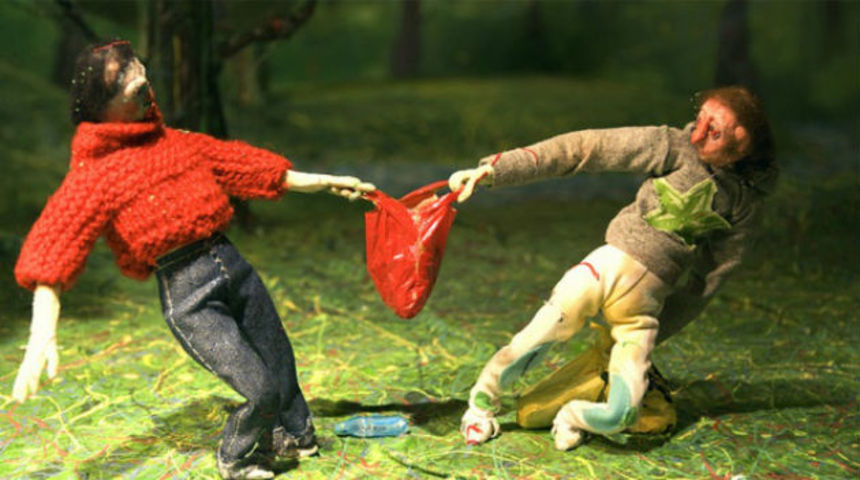 Serial killers, satanic rituals, and "an exasperated amphibious creature recalling the adventure that led him to a sushi restaurant chopping block" are featured in the first three short films announced for Fantastic Fest 2013 -- and there are more than three dozen more in the lineup.

A quick scan reveals Masaaki Yuasa's "candy-colored" animated wrestling film Kick-Heart will be playing, too, which is the one I've heard the most about, but the real fun in the shorts programming is hearing about the ones that emerge as "must-sees," which then often leads to the discovery of delightfully bent visions. Also cool: Kier-La Janisse is now the festival's lead shorts programmer, which raises interest even higher. Her brief bio is below:


Fantastic Fest is wildly excited that longtime festival comrade KIER-LA JANISSE is now our lead shorts programmer. Kier-la created the notorious CineMuerte Film Festival in Canada, and was the first full-time film programmer for the Alamo back in the "wild west" days. She has since gone on to countless careers including film producer, theater owner, documentary subject, film journalist, and author of House of Psychotic Women, which had its own FF film sidebar in 2012. Her shorts programs this year represent her visionary tastes and superhuman viewing abilities.

Here's the complete Fantastic Fest 2013 shorts lineup; all descriptions by the festival:

BASKIN (Turkey, 2013)
North American Premiere
Director - Can Evrenol, 11 min
A group of Turkish police called in to a desolate area stumble upon a squalid and blood-soaked den of satanic ritual. The latest from Fantastic Fest alumnus Can Evrenol (TO MY MOTHER AND FATHER) is a visceral trip into the darkest pits of a very palpable evil.

BEASTS IN THE REAL WORLD (Canada, 2013)
U.S. Premiere
Director - Sol Friedman, 8 min
Sol Friedman follows up his brilliant LOVE SONGS FROM AN ANDROID and A MESSAGE FROM YOUR ROBOT PRESIDENT with this iconoclastic blend of documentary, animation and action fantasy about an exasperated amphibious creature recalling the adventure that led him to a sushi restaurant chopping block.

THE BODY (UK, 2013)
North American Premiere
Director - Paul Davis, 18 min
A serial killer (Alfie Allen, GAME OF THRONES) discovers he can get away with anything on Halloween night, including dragging his latest victim around as a prop amidst a sea of oblivious London partiers.

BREAKFAST ON THE GRASS (Estoria, 2011)
Texas Premiere
Director - Erik Alunurm & Mari-Liis Rebane, 5 min
A hilarious claymation take on the making of a masterpiece, brought to us by students of acclaimed Estonian animator Priit Parn.

DRUNKER THAN A SKUNK (USA, 2012)
Texas Premiere
Director - Bill Plympton, 3 min
Animation vet and Fantastic Fest fave Bill Plympton's latest is a wily adaptation of Walt Curtis' 1973 poem 'The Time The Drunk Came To Town And Got Drunker Than A Skunk, Or So He Thought,' about a roving drunk who is brutally tormented by mean-spirited townsfolk.

EAT (Germany, 2012)
U.S. Premiere
Director - Moritz Kramer, 7 min
A fashion model fantasizes about indulging herself in a world where everything is edible.

EXQUISITE CORPSE (France, 2013)
North American Premiere
Director - Léa Mysius, 25 min
Director Léa Mysius turns a grim premise into an utterly adorable film debut with this story of an insolent tomboy living in the French countryside who finds an unlikely playmate in the dead body she drags out of the local swamp.

FLESH (Columbia, 2013)
North American Premiere
Director - Carlos Gomez Salamanca, 8 min
The faces and impressions surrounding an animal sacrifice in Columbia are brought to life in an animated reconstruction from actual video archive footage that counters the profane with the abstract.

GREEN EYED (Australia, 2012)
North American Premiere
Director - Nathaniel Lindsay, 16 min
An obnoxious up-and-coming executive can't understand why no one else can see that his professional and social rival is actually a reptilian monster.

HERE BE MONSTERS (New Zealand, 2013)
Texas Premiere
Director - Paul Glub & Nic Gorman, 15 min
In the wake of a zombie apocalypse, an infected soldier is sent home to spend his last hours with his wife and estranged daughter. Amidst reconciliations and toasts, all are aware that time is running out fast. The assured directorial debut of visual FX producer Paul Glubb (THE HOBBIT; DON'T BE AFRAID OF THE DARK).

KICK-HEART (Japan, 2013)
Regional Premiere
Director - Masaaki Yuasa, 13 min
The latest from anime outlaw Masaaki Yuasa (MIND GAME) is a candy-colored story of secret obsession: professional wrestler Maskman M derives masochistic pleasure from being pummelled by his Amazonian opponent Lady S, who clearly reciprocates in savouring their violent public trysts. But do they have a chance in the real world?

MANIFOLD (Canada, 2013)
U.S. Premiere
Director - Anthony Scott Burns, 10 min
Canuck character vet Stephen McHattie stars as a country sheriff investigating what appears to be a mass suicide, while miles away a computer tech developing a complex facial recognition program stumbles upon his own connection to the bizarre mystery. The latest from filmmaker and visual FX whiz Anthony Scott Burns, MANIFOLD has already been optioned for development as a feature.

MEMORABLE ME (Canada, 2013)
Texas Premiere
Director - Jean-François Asselin, 15 min
In this savvy commentary on the narcissistic pull of social media platforms, a self-obsessed man is convinced that he will cease to exist unless someone is thinking about him at all times, causing him to stoop to the lowest levels of unethical and debasing behaviour to satiate his need for constant attention.

MISTERIO (Spain, 2013)
Texas Premiere
Director - Chema García Ibarra, 12 min
A deadpan black comedy from the director of Fantastic Fest favorite ATTACK OF THE ROBOTS OF NEBULA 5 about an alienated Spanish housewife who gets a secret message from The Virgin that will change her life forever.

MUNCHAUSEN (USA, 2013)
World Premiere
Director - Ari Aster, 15 min
A clingy mother (Bonnie Bedelia of THE STRANGE VENGEANCE OF ROSALIE and DIE HARD) goes to extreme lengths to prevent her son from going off to college. The latest from the prolific director of the disturbing THE STRANGE THING ABOUT THE JOHNSONS.

MY PAIN IS WORSE THAN YOUR PAIN (USA, 2013)
Regional Premiere
Director - Adam Hall, 17 min
Based on the short story by T.C Boyle, Adam Hall's short film about the ostracization of a desperate man (Clark Middleton, SIN CITY; KILL BILL VOL. 2) following his professed obsession with a female neighbour explores the subjective toll of daily humiliation.

THE NATURALIST (USA, 2013)
Texas Premiere
Director - Connor Hurley, 15 min
What if you could take a drug to change your orientation? In a future where only the genetically modified thrive, one man is faced with a horrible decision. One of the most poignant and disturbing bits of dystopian sci-fi we've seen this year.

NINJA ELIMINATOR III (Canada, 2013)
U.S. Premiere
Directors - François Simard, Anouk Whissell & Yoann-Karl Whissell, 4 min
The latest gonzo short from Canadian collective Roadkill Superstar, (whose TURBO KID feature is about to head into production) this mock-trailer delivers everything you could want in a long-lost Godfrey Ho flick, including the obligatory "Ninja" headbands and boobs that turn into cats.

PERFECT DRUG (Belguim, 2012)
Texas Premiere
Director - Toon Aerts, 14 min
After a bungled burglary, a gang of hoods sit in a parked car waiting to hand off their loot - a suitcase full of neon test tubes - to a merciless crime boss. But when one of them dives into the stash, psychedelic ultraviolent mayhem ensues. Pure body-swapping anarchy with ice cream and pickles.

SKOM (France, 2012)
U.S. Premiere
Director - Christophe Deroo, 8 min
In this Lovecraftian throwback to the pulpy pleasures of vintage horror comics, two kids stumble upon their school janitor's ghastly plan to get rid of his domineering mother.

SWEET RABBIT (Netherlands, 2012)
North American Premiere
Director - Camille Schouwenaar, 14 min
Based on the book by Dutch children's writer Imme Dros, a middle-aged housewife is seized by anxiety when she starts to grow rabbit ears and finds the community unsympathetic to her predicament.

THE VEHICLE (Canada, 2012)
Austin Premiere
Director - O. Corbin Saleken, 11 min
A woman is accosted by a man who claims to be carrying an important message for her from the future. A captivating character piece propelled by two quietly breathtaking performances.

WE, THE MASSES (Ireland, 2011)
Austin Premiere
Director - Eoghan Kidney, 13 min
In a snowy landscape after an unnamed cataclysmic event, a lost man looks for signs of civilization, falling in with an anarchic smattering of humanoids whose destructive impulses are at odds with his need for transcendence. Based on drawings by artist Robyn O'Neil, this fourth short from former member of Irish animation collective Delicious 9 Eoghan Kidney is a disquieting journey through the machinations of social trauma.

WHISPERS (USA, 2013)
World Premiere
Director - Max Isaacson, 7 min
Convinced that the rats rampant in his home are trying to infest his body, a man slowly goes insane in a dank basement, surrounding himself with bloody trophies.

WITCH (USA, 2013)
World Premiere
Directors - Americo Siller &Tyler Major, 7 min
In their directorial debut, Austin's own Tyler Mager and Americo Siller turn in a surreal and grotesque story of a couple in the middle of a public breakup who realize too late that they have their hearts on the line in more ways than one.

YOU ARE HERE (Canada, 2012)
Texas Premiere
Director - Leslie Supnet, 3 min
Inspired by the work and tragic murder of animator Helen Hill, Leslie Supnet's YOU ARE HERE is a lovely ode to surviving connections beyond the grave.

ZIEGENORT (Poland, 2013)
Texas Premiere
Director - Tomasz Popakul, 19 min
A fishboy living in a coastal village resorts to shocking behavior when shunned by his peers. Making great use of manufactured chiaroscuro lighting and striking color flourishes, this award-winning short is a dramatic slice of teen angst at its most nightmarish.