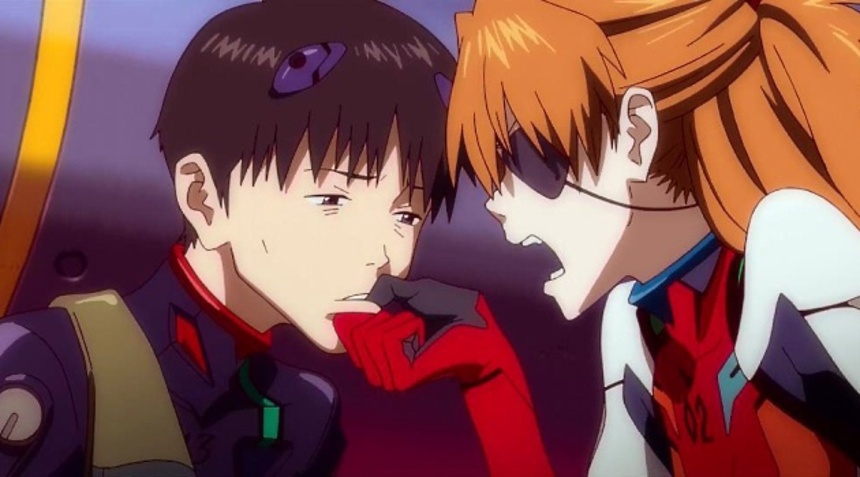 (Change whatever you want, how much you want: it's all still the same in the end...)

A year ago, we were only a few weeks removed from the world premiere of Evangelion: 3.0 You Can (Not) Redo, yet so little had been shown of it and the teasers were so vague, that doubt still existed if there actually was a movie there or not. Then, of course, the premiere happened, the film turned out to be really real, and fans worldwide could start discussing its contents again. And oh boy, was there a lot to discuss...

This week, the excellent Camera Japan Festival in Rotterdam was kind enough to show the film theatrically, just as they did with the previous two films, and that is where I saw it: in a cinema, with friends. Some of these were EVA veterans, some had never seen anything EVA before and were just along for the ride. I'm mentioning this because the discussions afterwards were a lot more fun than the film itself. I'm running a bit ahead here though, so let's do the review first.

Shinji wakes up fourteen years after the events in the previous film. All his friends apparently hate him, and refuse to say why. Before he finds out what THE HELL happened, Shinji is whisked away by a mysterious organization, to pilot a new kind of Eva... 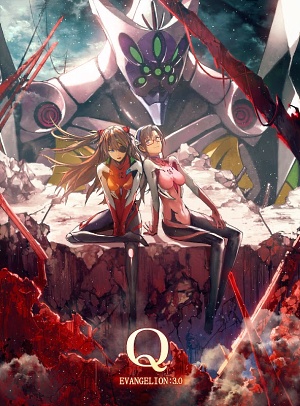 To be honest I was tempted to describe the story with just a: "There isn't one". Think I'm being flippant? I'm not. In this, the third movie in the rebuilt Evangelion series of four, Anno Hideaki finally moves the franchise into entirely new territories. The first film was an almost moment-by-moment repeat of the original television series' first quarter, but the second film did a good job diverting the storyline in a new direction. Its double-ending pointed towards a sequel that was going to be entirely different. And after an extraordinarily long wait, something "entirely different" is exactly what we got.

When I saw the film yesterday, the newbies in our group had a lot of questions for the veterans. None of them we were able to answer, take that as you will.

But one question I did hope to answer was: do all the big changes in this third film amount to anything? In short, what do they add?

Just think about the very fact that film number three takes place fourteen years later. Let that sink in. What does that mean in this particular universe? The first two films got most of their tension from Shinji's relationships, combined with the sense of urgency: at any moment, a new angel could attack Japan, and the result of not stopping it in time would be the end of the world, the death of all of Shinji's friends. No matter how weird or incomprehensible things would get, at least you had that framework of urgency. That sense of impending doom, of loss.

Now, with a gap of fourteen years and no explanation whatsoever, all urgency is gone. What fractions of humanity remain seem to be warring amongst themselves rather than against angels. Godlike creatures still attack although they are not angels, and one fraction has built a supership capable of dei-cide. Granted, the over-designed monstrosity looks wicked cool, especially when it gets airborne and takes an entire fleet of regular ships along with it. But it is the single most noteworthy thing in the third film, and that is not good news. 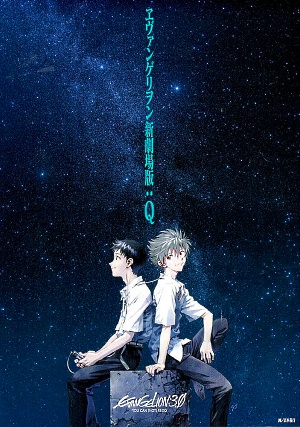 Shinji's relationships, his friends... all do not exist in this film. People you knew have now changed, say three sentences, and leave. New characters have been created, but calling them characters is giving too much due already. At best they are cyphers, there's nothing there, at least not yet. Shinji does make one new friend, and that at least brings the film to life a bit. But storywise, the few beats in Evangelion: 3.0 You Can (Not) Redo that DO work have all been used in the original ending of the original series already, and seeing them in this new environment doesn't really change them. Could it be that this is Anno's message? That no matter how much he tweaks Evangelion, big changes or small changes, its core will always remain the same?

Also, did I not "get" the film? Possible. Maybe. There's a lot I do not understand, but that has never impacted my appreciation of these rebuilt films before. After the first one, I used to hope that the new films would explain some of the most annoying story-gaps in the television anime, but that notion left me already when Evangelion: 2.0 got batshit crazy at the end. And, frankly, it wouldn't really be Evangelion if it all got too lucid. But I got into this third film without any expectations, or at least that's what I thought. So when I left the cinema disappointed, it really annoyed me.

Oh, rest assured I will go see the fourth film. Number three stops sort-of in the middle of whatever story it has going, and I do want to know how it ends. I will also buy the Blu-ray, because that Wunder-ship needs some careful studying.
But am I still truly aboard of this train? I'm not sure anymore. I do no longer feel emotionally involved with what I see on the screen.

Anno seems to have started on a new cake without properly finishing his previous one. And without any characters left to root for, nor any world left to fight over, this newest Evangelion just fails to engage. There are a few spectacular sequences worth watching, but with neither cause nor effect there is very little to recommend here.

Do note that opinions are divided on this. Evangelion: 3.0 You Can (Not) Redo can also be seen as part of Reel Anime in Australia, and Kwenton Bellette (who saw it there) absolutely loved the film, calling it a masterpiece even. So if you are an EVA fan, do check this one out for yourself.