Learning From The Masters Of Cinema: D.W. Griffith's THE BIRTH OF A NATION 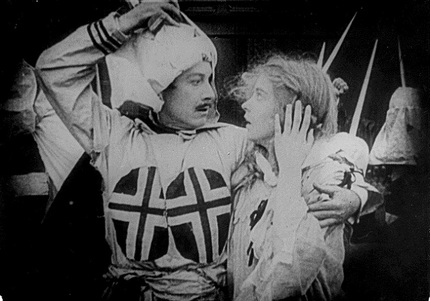 Should The Birth Of A Nation still be revered as a cinematic masterpiece? D. W. Griffith's silent Civil War epic has been dividing opinion ever since it first premiered in 1915, so while this is hardly a new topic of debate, the release of Masters of Cinema's spanking new Bluray prompts us again to evaluate one of the most controversial works of American Cinema.

A mammoth undertaking at the time, The Birth Of A Nation cost a whopping US$112,000 to produce and weighed in at a butt-numbing 190 minutes, an alien concept to audiences familiar only with 2-3 reelers up to this point. However, despite hiking up the ticket price to a then-ridiculous $2 (compared with a standard $0.40 ticket), The Birth of a Nation proved a box office sensation and remained the highest earner at American cinemas until Gone With The Wind opened 25 years later.

Screened in two parts, the film begins as the story of two families, the Stonemans from Washington DC and the Camerons from Piedmont, South Carolina. Congressman Austin Stoneman (Ralph Lewis) is a staunch abolitionist seen to be having an affair with his mixed-race housemaid, while Dr. Cameron (Spottiswoode Aitken) is an amiable Southern gentleman with a cotton plantation and large slave workforce. On a trip to Piedmont, older son Phil Stoneman (Elmer Clifton) falls in love with daughter Margaret Cameron (Miriam Cooper), while Ben (Henry P. Walthall), one of the Cameron boys, sees a photo of Elsie Stoneman (Lillian Gish) and is instantly smitten.

Before either party can make a move to consummate their feelings, however, the two families are pitted against each other by the outbreak of the civil war. During the four bloody years that follow, the Camerons lose two of their boys, while Ben becomes a war hero dubbed "The Little Colonel". The Stonemans also lose their youngest to the conflict, and when President Lincoln is assassinated, Austin Stoneman's grip on power becomes even stronger.

In the film's second half, set during the tumultuous Reconstruction Era that immediately followed the war, we are shown how the North went against Lincoln's agreement and was determined to see the South pay for its war crimes. The South was flooded with black soldiers who harass passers-by and torment white women. Black legislators are portrayed as slovenly, disorganised and undignified, and desperate Ben Cameron is driven to take the law into his own hands. He assembles a mob of like-minded individuals, who don white cloaks and hoods to look more fearsome as well as to protect their identities, and set off to readdress the rule of law.

You don't need to be a scholar of American History to realise that this retelling of events is somewhat out of whack, and Griffith's take on events is horrifically skewed and flat-out racist. The Ku Klux Klan, whom we know (as they did in 1915) to have been a motley crew of disgruntled slaveowners, idle confederate soldiers and opportunistic bigots, are painted as heroic saviours, risking their lives to protect the innocent from the brutality of savagery unleashed. In fact, the film was so sympathetic to the cause, it was used as a recruitment tool by the KKK for many years and is even to blame for a resurgence of Klan activity around the time of its release.

Modern audiences will struggle not to be offended by Griffith's manipulation of historical events and flagrant racist stance, but back in 1915, when the language and purpose of cinema was still being defined, nobody had used the medium to recount stories from history to the extent Griffith attempts here. Today we understand that Private Ryan, for example, probably wasn't real, but the events Spielberg places him in played out largely the way that film depicts them. Back in 1915, this idea was entirely new. 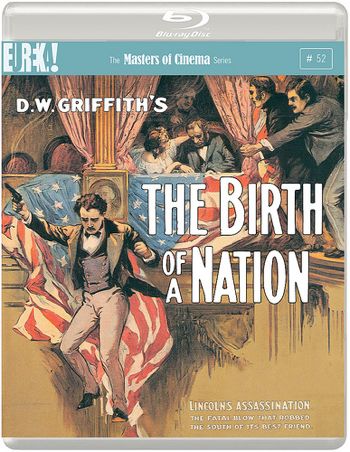 But beyond this, Griffith's film expanded on the language of cinema, the punctuation of editing, the emphasis of the close-up, iris shot or insert, to such a degree that almost everything he introduced in this film, was immediately embraced and copied by the rest of the industry. As film historian Kevin Brownlow pointed out in The Parade's Gone By..., the film initiated "so many advances in filmmaking technique that it was rendered obsolete within a few years."

Most impressive in the film is Griffith's staging of battles. Regardless of who was fighting whom, and what their motivation was, there is no denying the grandeur, scale and complexity of these sequences. There are also numerous instances where Griffith expertly cross-cuts between different events occurring concurrently, yet in different locations. 100 years later this is a commonplace technique, but at the time it was revolutionary.

As a result, we are left with a challenging quandary. There is no denying the incredible achievement and influence of The Birth Of A Nation as a piece of cinematic storytelling. It is a masterpiece of the form responsible for the largest single leap in the artform's articulation, probably ever. In later years we can point to the introduction of sound, colour, CGI or 3D, but nothing did more to evolve the industry than Griffith accomplished in 1915. But why did it have to be accompanied by a narrative so offensive, backward-thinking and ignorant? How can we honestly praise a film so riddled with prejudice and hate? And so the legacy of The Birth Of A Nation continues to make a profound impact almost 100 years later.

Masters of Cinema has released a typically rich and substantial package, fronted by a new 1080p presentation of the film, restored from original 35mm elements in its original aspect ratio. Considering the film is 98 years old this year, it looks in remarkably good shape too, with almost all scratches and damage removed, which never once impedes on the viewing experience. The film is accompanied by a newly recorded score, available in 2.0 stereo and DTD-HD 5.1, by the Mont Alto Motion Picture Orchestra.

In terms of extas, both thr Blu-ray and DVD releases include archival introductions of both parts of the film by D.W. Griffith, in scripted interview fashion with Walter Huston, as well as a newly discovered intermission sequence and the 1930 re-release title sequence. There's a 24-minute making-of documentary from 1993 as well as 7 Civil War-themed shorts from Griffith, including In The Border States (1910), The House With Closed Shutters (1910), The Fugitive (1910), His Trust (1911), His Trust Fulfilled (1911), Swords And Hearts (1911) and The Battle (1911). The release also includes a 44-page booklet with writings from Griffith, Thomas Dixon - writer of The Clansman, on which the film is based, Francis Hackett, Seymour Stern and Michael Powell.

While there is no way The Birth Of A Nation can ever be forgiven for the offensive nature of its content, nor should it ever be excused, there is no denying the film's incredible influence on cinema and the mastery of Griffith's filmmaking talent. Masters of Cinema's release offers up an excellent restoration of the film, as well as a bounty of supplemental content that puts it in the proper context. Cinephiles both familiar with this landmark of silent cinema and new to its treasures and horrors should find everything they require right here.

The Birth Of A Nation is available on Blu-ray and DVD now.

More about The Birth of a Nation