New Teaser For THE BIRTH OF A NATION: Strange Fruit and Bloody Justice 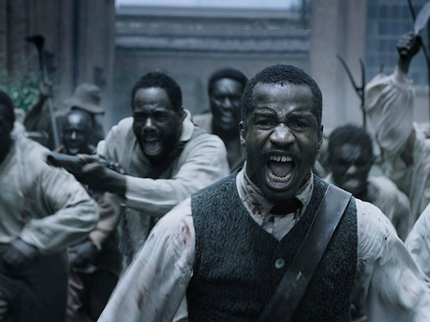 Winner of both the Grand Jury Prize and the Audience Award at Sundance this year, The Birth of a Nation was a runaway hit, garnering not only awards and critical praise, but a distribution deal with Fox Searchlight for $17.5 million. The film is a passion project for Nate Parker, who wrote, directed, and stars in the film, and the first teaser is now available.

The Birth of a Nation (taking its title from D.W. Griffiths' famously racist 1915 film of the same name) tells the story of the real-life Nat Turner, a slave in early 19th century Virginia who led an rebellion against white enslavers. It stars Parker as Turner, alongside Gabrielle Union, Penelope Ann Miller, Jackie Earle Haley, and Armie Hammer.

As Parker pointed out in an interview, despite this story being nearly 200 years old, it is still chilling in its relevance, with divisions among Christians, vast differences in living conditions, and, from a production perspective, proving that while difficult -- it took Parker seven years to raise the $10 million budget -- audiences want these stories.

The film is set for release in the US on October 7. Check out the teaser below.

Do you feel this content is inappropriate or infringes upon your rights? Click here to report it, or see our DMCA policy.
Gabrielle UnionJackie Earle HaleyNate ParkerPenelope Ann MillerThe Birth of a Nation

More about The Birth of a Nation