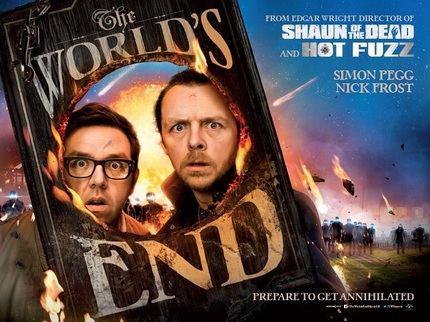 Gary King (Simon Pegg) is that guy everybody knows from high school. The cautionary tale. The guy who peaked too early and who now has to come to grips with the fact that his life will never again be as good as it was when he was sixteen, that he's already well into the downhill slide and there's nothing at all that he can do to stop it. And so Gary does what all Gary's do. He gets drunk and pretends that nothing has changed, that he effectively is still 16 and life is still awesome. And in this particular Gary's case, he's taking some friends along for the ride, reconstructing the greatest night of their lives, the night five high school chums tackled a legendary pub crawl and failed. But this time will be different. This time they will succeed.

Gary is correct about one thing, at least. Things are different. Very different. His friends have changed, for one thing, all of them moving along with their lives while he has been stuck in neutral. But the big difference comes in their childhood home, the increasingly drunken friends discovering that the townsfolk have been replaced by robot doubles (those would be the guys with glowing eyes and mouths all over the trailers) for some nefarious - and unknown - end.

What do you do with this sort of information when you are out of your element and really quite drunk? Well, you don't drive home, for one thing. You're too responsible for that. You don't know how far this robotic scheme extends. You don't know who you can trust and who you cannot. The solution? You need to buy time to gather information. And to do that without raising suspicion, you need to continue on the course you have already set for yourself and happily announced to local folk who may or may not have been robots. You need to keep drinking. You need to complete the Golden Mile. Which suits Gary just fine, thanks.

Given that this is the third big screen collaboration between Edgar Wright, Simon Pegg and Nick Frost following Shaun Of The Dead and Hot Fuzz, it is somewhat inevitable that the focus of discussion around The World's End leading up to release has revolved around that trio. Which is all well and good, really, and we'll certainly get there, too, but to focus on that trio exclusively is to overlook something fundamental to the nature of this film. Because The World's End is not a straightforward buddy comedy at heart the way those previous efforts were. This is an ensemble in the truest sense of the word, with the expanded cast every bit as fundamental on screen as the Frost / Pegg duo.

Rounding out the group of childhood friends are Paddy Considine (single architect Steven, still bouncing between pointless relationships while pining for the one girl he ever really loved), Eddie Marsan (the bullied Peter, still living in his father in law's shadow) and Martin Freeman (workaholic realtor Oliver), with Rosamund Pike coming along as Oliver's sister Sam, who happens to be the girl Steven has never gotten over. All of the principal players are simply fabulous, not only fully embracing their roles as different versions of flawed adulthood, but also perfectly capturing the easy relationship and multiple layers of friendships and rivalries that have spanned decades. There's a casual comfort to the quintet that carries The World's End a long, long way with Wright ensuring that each is a fully fleshed out character, each with their own grace notes and issues and moments to shine in the sun.

The ensemble nature of the project extends well beyond that core group, as well, with Wright pulling in all manner of familiar faces - whether those be familiar from his own past work, contemporaries on the UK comedy scene who they've come up through the ranks with, more recent additions to the Big Talk family, or the occasional iconic face or two whose presence I refuse to spoil, beyond saying that Wright's love of casting those he loves himself has never been more obvious nor has his use of those faces been more deft and appropriate.

Which brings us to the core duo, I suppose, and the intriguing reversal that has been undertaken here. In previous work - stretching right back to Spaced - the Pegg / Frost dynamic has been pretty fixed, with Pegg being the more responsible of the two (as far as either could ever be termed 'responsible') and Frost the purely comic foil. Here that dynamic has - seemingly - been reversed, with Pegg's Gary being the waster, constantly spouting one liners and refusing to take life seriously, while Frost's Andrew is the sensible voice of reason. That eventually goes out the window, of course, with Frost eventually diving into the proceedings with such aplomb that you'll have a hard time believing he ever wasn't a comedic action star - word is that Frost was frequently referred to on set as 'White Sammo' or 'The Pink Hulk' - while Pegg's performance as Gary continues to peel away layers eventually revealing a broken, tragic human being at his core. These are two of the most demanding roles - in very different ways - that either man has ever taken on and both acquit themselves fantastically well.

And, yes, for those paying attention: I did just refer to Nick Frost as a comedic action star. Because while the ad campaign hasn't particularly tipped this fact, there is a LOT of action here, Wright again teaming with his Scott Pilgrim fight coordinator Brad Allen to deliver some truly stellar action sequences staged with great aplomb, shot with immense confidence and style, and executed completely convincingly by the core quintet of performers, all of whom performed almost all of their own stunt and action work with Frost and Considine, in particular, proving to be naturals in this particular area. The boys can throw a punch.

But the bigger issue is, can they tell a joke, and the answer to that is a resounding YES. The World's End is a frequently laugh out loud comedy, the script as strong as any this particular crew has been involved with before. And the key to that, I think, is that while the writing on these projects has always been confessional to a degree - always based on the principals' own personalities - they are never content to simply repeat themselves and instead use the comedy to engage with their changing stages of life. So while the voices are familiar and the writing as sharp and pointed as ever, each film comes from a slightly different perspective because they are simply different people now than they were when they made Shaun, and facing some thorny issues around aging and meaning.

If there's a negative here, it's that the final confrontation feels like a bit of a dip from the scope and pace of the build up, but the choices that Wright makes here are both so sound logically - there are really only a couple ways that pub crawls ever end, after all - and character wise that it's hard to complain too much.

Sharp and funny, a surprisingly insightful take on hitting middle age, and a kick ass action / scifi movie all rolled into one, The World's End is everything that fans of Wright, Pegg and Frost could possibly ask for. It's a rollicking piece of entertainment populated by weirdly believable characters you actually come to care about and, once again, proof that the particular genius of this group comes from their deep real life friendships which are now expanding out to include an even broader base of deeply talented folk. Yes, it's good. Go see it.