Review: THE ACT OF KILLING Induces Nightmares From Real Life 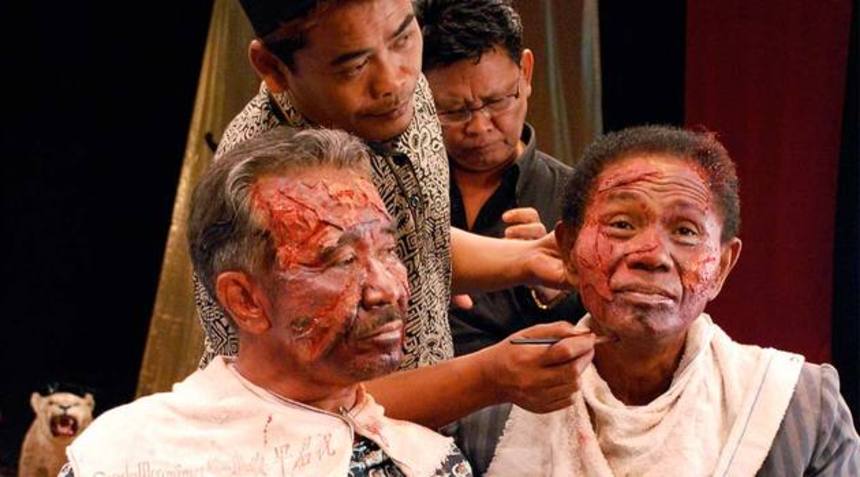 Easily one of this decade's most important and most harrowing documentaries, The Act of Killing is a shattering take on the nature of evil.

The conceit of the documentary is unique to the form. Filmmaker Joshua Oppenheimer traveled to Indonesia to tell the story of mass murder by having those that perpetuated the killings recreate their actions in their own way. The project started as a documentary about some farm workers who were trying to organize into a kind of union. Getting much resistance from those reluctant to talk, it was suggested that Oppenheimer go and talk to the neighbours of these workers, those that were leaning on them to cease such actions.

These neighbours proved to be self-admitted murderers. More than that, they were proud of what they did, and happy to share, and on film recreate, their actions of brutality.

Some two million people were killed in Indonesia in the mid-60s, as Ethnic Chinese and those labelled as Communist were rounded up and slaughtered. The film introduces us to a number of the "Gangsters" that were at the forefront of these actions. They dispassionately tell the camera of their actions, even acting out some of the methods they used, with sticks and wire, to snuff the life out of those that they interrogated.

We meet the newspaper publishers, politicians, and youth group leaders that decades on still control the country. As they parade through the streets in their day-glo orange camouflage, they help reenact the slaughter of entire communities, children and all, and form rampage squads to rid the nation of the corrupting influences of their enemies.

The central characters are the self appointed "Gangsters", and we're reminded over and over, proudly, that these are simply men who wish to be free. Free from restriction, from morality, from any type of check on their power, this is a dark kind of Libertine, free to be corrupt, to bully, to extort, to murder.

This is a story of brutality told by the victors, and I cannot think of any instance where such raw, almost matter of fact accounting of murder has been captured for such a film. 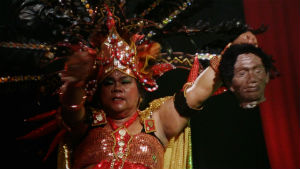 Many of the film's most startling moments should be reserved for those that have yet to see it, but the mix of the surreal (dancing women emerging from a fish's mouth) and the mesmerizing accounts of torture and killing make for an intense experience indeed. One of the most effective moments is when an actor in a recreation, a neighbour of one of the main executioners, tells nervously of his own experience, when his stepfather was led away and killed. The story is told with this sickening laughter, a nervousness as this person, this countryman, this neighbour tells of his family tragedy to the very people who committed the act.

There's nothing unique in the style of barbarity that's accounted for here, nothing specifically Indonesian about their atrocities. It's the same human behaviour that has characterized military action throughout time. What's remarkable with this film is that the perpetrators are now the ones in power, now the ones who can tell their story with complete impunity and an utter lack of remorse. This is the most chilling part of the work, how pedestrian and matter-of-fact the whole account is, how easy it is to see their actions reflected whenever man chooses to take the life of another.

Even political corruption is laid bare; we see a man who admits, without even a fleck of shame, that he's running as a politician in order to be in a better position to receive bribes. We see voters asking explicitly for gifts in order to vote for a particular candidate, who seem visibly annoyed when they're promised rewards following the election, not before.

There's a beautiful divide in reaction, between the one killer completely at ease with his own actions, yet openly criticizing the prevailing narrative that drove the original actions, to our main character who through the course of the film admits to his own uncertainties for what he admits were more than one thousand killings.

Documentary titans Errol Morris and Werner Herzog have both lent their names as producers on the film to ensure it gets as wide an audience as possible. Many of the crew responsible for the making of the work are listed in the credits as "Anonymous". The filmmaker has left the country, and while screenings in Indonesia are planned, there remains very much a sense of dread over the project, a genuine fear for the lives of those that told the story.

The Act of Killing stands as one of the more powerful and harrowing documentaries ever made. It demands to be seen, and stands as an epic achievement in non-fiction filmmaking. Certain to be applauded for years to come, it's more horrifying than any genre pic, more unsettling and nightmare inducing than any fiction work could ever be.

Review originally published during the Toronto International Film Festival in September 2012. The films opens at Landmark Sunshine in New York on Friday, July 19, and expands to other cities across the U.S. in the following weeks. Visit the official site for theaters, playdates, and more information..