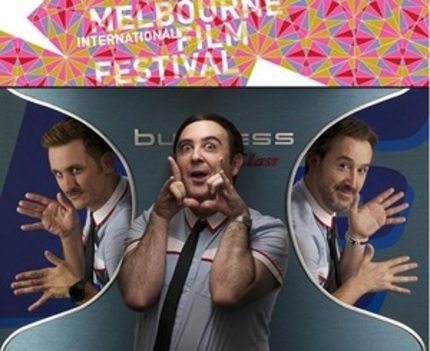 Ah, MIFF, at last you grace Melbourne, Australia with your proliferating presence; more than 300 films in just under two weeks? I will be covering a heck of a lot on ScreenAnarchy, so let's get started, shall we?

Opening night kicked off in superb thematic style at the newly-renovated, ultra-glitzy Hamer Hall. A venue MIFF will not use again this festival, but one I feel fortunate to visit.
I'm So Excited! (Los Amantes Pasajeros) is 'a film by Pedro Almodovar' and for once not 'a film by Almodovar', he has let his hair down for this one, making for a lighthearted opening film choice.

I agree with a lot of what Brian Clark said in his review (read here). This off-beat satire set in the sky should be alarming and exciting, but aside from the "raucous rendition of the titular song by the Pointer Sisters," it is a film "with few other surprises." It is in fact only passable, safe comedy that certainly improves after a few champagnes. The film comes across as colorful but quite dull, never overdoing the camp, the sex or the drugs which is a shame given it had ample time and opportunity to do so.

Brian again states that certain supremely interesting figures on the plane "never quite make good on the potential of the character" and this is certainly true and another missed opportunity for Almodovar to let loose. The characters are given small minor arcs. One of these ventures outside the plane adds up to almost no effect and disrupts the previous humor of the inane banter of the gay, alcoholic flight attendants, who unmistakably steal the show.

Brian sums it up perfectly by stating that "good movies of this sort make you wish you were there with the characters, whereas the really great ones make you feel like you actually were. I'm So Excited! falls squarely into the former category, which is a bit disappointing given the talent involved."

Join me in my next article as I discuss day 1 and American indie gem It Felt Like Love, Hong Kong heartbreaker Bends, and South Korean film within a film Behind The Camera, as well as choice reviews from my colleagues of films playing at MIFF.

Check out my review of the beautiful Mystery Road here .

I'm So Excited! is coming soon to select Australian theaters.

Do you feel this content is inappropriate or infringes upon your rights? Click here to report it, or see our DMCA policy.
Melbourne 2013Pedro AlmodovarPedro AlmodóvarAntonio BanderasPenélope CruzCoté SolerAntonio de la TorreComedy