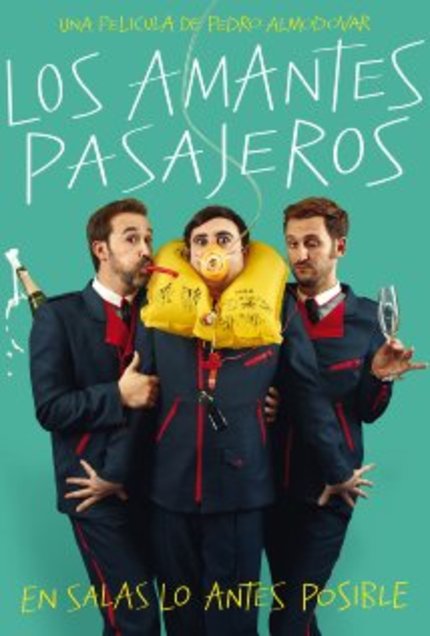 Oh, Almodóvar. You've given us comedy, drama, romance, horror, and we come back for more. While he might have stumbled a bit in the early 2000s, the world's favourite Spanish filmmaker made a great comeback with 2011's The Skin I Live In, and looks to be continuing the trend with his new film, I'm So Excited (Los Amantes Pasajeros.) I showed the trailer to my film students, who without clues knew this was an Almodóvar film; that's how recognizable his brand has become. This is not meant as a slight; with a few exceptions, his films always feel fresh and original.

Little is known of plot, except that most of it takes place on a small airplane. It it looks like a throwback to his early sex comedies such as Women on the Verge of a Nervous Breakdown. It stars some Almodóvar veterans such as Javier Cámara, Penélope Cruz, and Cecilia Roth, as well as newcomers to the Almodóvar fold, such as Carlos Areces (Extraterrestrial), Raúl Arévalo (Ghost Graduation) and Antonio de la Torre (The Last Circus). The trailer is in Spanish without subtitles, but really, the language of Almodóvar needs no translation.

Do you feel this content is inappropriate or infringes upon your rights? Click here to report it, or see our DMCA policy.
Pedro AlmodovarPedro AlmodóvarAntonio BanderasPenélope CruzCoté SolerAntonio de la TorreComedy