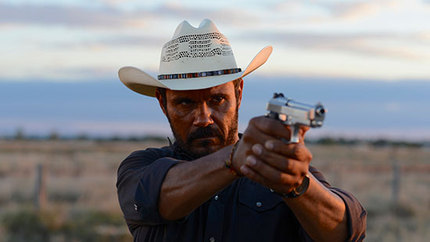 Mystery Road, the new Australian film by Ivan Sen that opened the Sydney Film Festival makes the most of its location and recalls films such as No Country For Old Men with its bare-bones harsh reality set against the backdrop of a sun-soaked, baked outback.

Aaron Pedersen plays the Indigenous Detective Jay who returns from the 'big smoke' of the city to the remote outback town in which he grew up. Jay's return is not in vain; he is quickly tasked with solving an intriguing murder of an Indigenous teen who is found at dawn by a truck driver in a drain under a highway. Alienation drives his investigation as both friend and foe alike turn a blind eye to him in his search for the truth, but when another similar murder occurs he begins to see the town in another light, and gains some unlikely allies in the process.

First the good; Mystery Road has the best cinematography I have ever seen in an Australian film. Sen makes an isolated rural community just that with his expansive and overhead shots, while the vast outback is framed in horizontal shots that highlight the endless stretches and the severe heat. The cinematography for interiors is also excellent, with utter attention to detail. Everything looks so clean and crisp, and this is bolstered by the incredible pin-drop sound design. There are a few chords of discordant music but for the majority it is a silent, dusty and haunting trek through a place Jay once called home, and this evocative location comes to life.

The mystery certainly keeps things going, there is clearly more to this town than a murdered teenager. There is so much unsaid and so many exchanged glances that indicate a shared darkness, an unlawful pact that has been occurring for years. The tone and mystery carries the film forward as it dissolves into a personal issue for Jay.

However, Mystery Road is hampered by extreme repetition. Partly this is a good thing, it emphasizes that Jay is stuck in a one-man investigation and must trek to each place, ask the same questions and research the same spots and people. In Mystery Road, however, this monotonous task is given no interesting detail and unfortunately really drags in key scenes. It does not help that Aaron Pedersen plays detective Jay like he is going through the motions, almost numb to what is happening around him despite his stoicism.

The supporting cast is good, but they are given little room to breathe in the suffocating screenplay that traps both them and Jay in single-situation encounters. Here dialogue is exchanged, feelings are felt and he moves to the next potential help or hinder. Through this slow and uninteresting investigation and line of questioning, hints and details come to light that organically lead Jay to more interesting places and even more suspects, and then the vicious procedural cycle begins again. Hugo Weaving as a vice officer adds an interesting dark humor to the mix but Pedersen barely plays against him to make his material engaging. Likewise it is with most other talents, including Ryan Kwanten in a blink-or-miss it role, albeit an excellent one that further exemplifies the dark underlying criminal intent and racism.

Perhaps this is the point; Jay feels like us, frustrated and surrounded by lethargic process that hampers his investigation, and in turn, our interest. Ultimately the plot picks up, but by then it is too late. What kept me involved was the tone and stunning cinematography, but ultimately this excellent film suffers heavily from its over-structured screenplay.

Mystery Road will be screening at the Melbourne International Film Festival on Friday 26 July.

Do you feel this content is inappropriate or infringes upon your rights? Click here to report it, or see our DMCA policy.
Ivan SenAaron PedersenHugo WeavingRyan KwantenJack ThompsonCrimeMysteryThriller