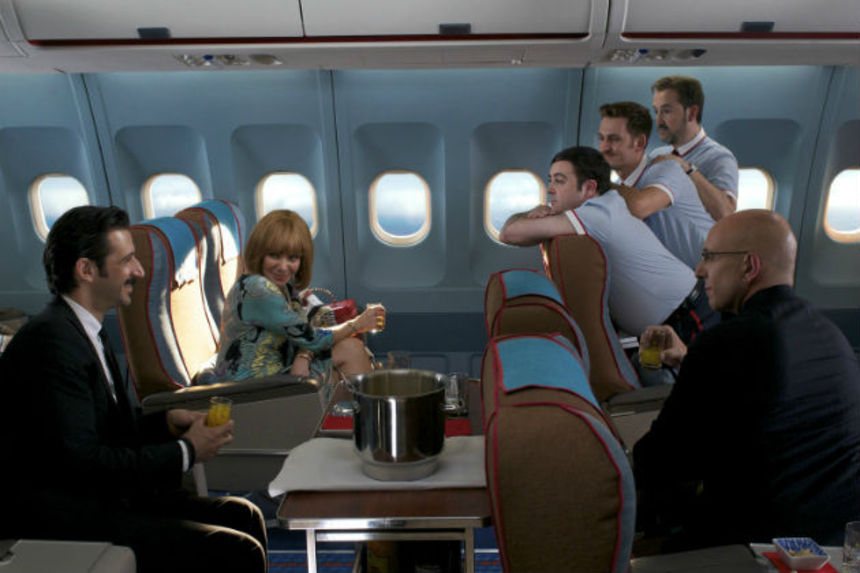 It's a bit of a shame that the U.S. release of Pedro Almodóvar's latest, called Los Amantes Pasajeros in Spanish, is titled I'm So Excited!, and that it will presumably use the moment where the flight attendants break into a raucous rendition of the Pointer Sisters hit as a key marketing point. Not that I blame them -- the song-and-dance is the film's high point, and easily its most unhinged and memorable scene -- but in a movie with few other surprises, the whole could have benefited greatly from such a burst of energy coming out of nowhere.

Not to say the rest of the film, a slight, stylish sit-com-melodrama at 35,000 feet, is bad. It's agreeable, breezy and often quite funny, but those hoping for the imaginative, epic melodrama of Almodóvar's recent work like Talk To Her and The Skin I Live In should probably (ahem) ground their expectations some. I'm So Excited! is a throwback to the director's sex-comedies like Tie Me Up! Tie Me Down!, and while there's nothing to really begrudge about it, it's still not as memorable or hilarious as even those earlier efforts.

The threadbare plot concerns a group of travelers in business class on a plane headed for Mexico (the crew drugged the economy class) who find out that there's a problem with the plane's landing gear. As is par for the course in an Almodóvar comedy, they will all bicker, consume copious amounts of booze and drugs, reveal hidden secrets, and fuck joyfully before it's over. There's a bit of pointed commentary about the economic crisis and those benefiting from it, but sex, comedy and substances are really at the front and center through most of the running time.

The ensemble cast is a wet dream for both Almodóvar fans and Spanish cinema buffs, and while all are charming and very funny, some aren't given much to do. Antonio Banderas and Penelope Cruz show up for a welcome cameo at the beginning, but they never make it onto the plane. 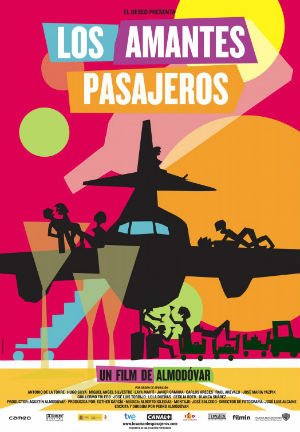 Once onboard, Almodóvar regular Cecilia Roth is used to great effect as a notorious madamme, as are Javier Camara, Raul Arevalo (Ghost Graduation) and Carlos Areces (Extraterrestrial), who steal the show as the singing, dancing flight attendants. However, after an amazing introduction, Lola Duenas' psychic virgin never quite makes good on the potential of the character, and Jose Maria Yazpick's tall-dark stranger character doesn't fare much better. Other less memorable characters, like a drug smuggler with a narcoleptic girlfriend and a regretful ladykiller, pop in and out, but never make a huge impression.

Almodóvar directs with his usual assured, saturated pop-visual style, and is still able to veer from soap-operatic melodrama to screwball comedy and back like no one else. The banter is consistently engaging, and, besides a puzzling detour off of the plane involving Paz Vega (stunningly beautiful as always), he never tries to overstep the boundaries of what an outrageous airplane-set comedy allows.

All the same, I wish he had taken the in-flight mayhem even further. The substances everyone mixes throughout the flight could have been mined much more effectively for humor, and many characters never fully crystallize as they should, which makes the end result feel even more slight than Almodóvar seems to intend. I should note, though, that the celebrated director's verbal comedy, I understand, is always much funnier if you're fluent in Spanish (I'm not) and have decent knowledge of the country's culture.

In the end, I'm So Excited! is essentially one of those "summer camp" movies where your enjoyment will correlate directly with how much you enjoy hanging out with the many colorful characters. Good movies of this sort make you wish you were there with the characters, whereas the really great ones make you feel like you actually were. I'm So Excited! falls squarely into the former category, which is a bit disappointing given the talent involved.

But perhaps I'm demanding too much. After all, if the movie has any theme at all, it's that you're better off downing some booze, singing a song and going down on the stranger next to you than becoming bogged down in things like analysis and pre-conceived notions of how things are supposed to be. And hell, I can get on board with that.

Review originally published during the film's theatrical release in France in March 2013. I'm So Excited! opens in select theaters in New York and Los Angeles on Friday, June 28 before rolling out nationwide. Visit the official website of distributor Sony Pictures Classics for more information.