Review: THE GUILLOTINES Dulls Its Blade 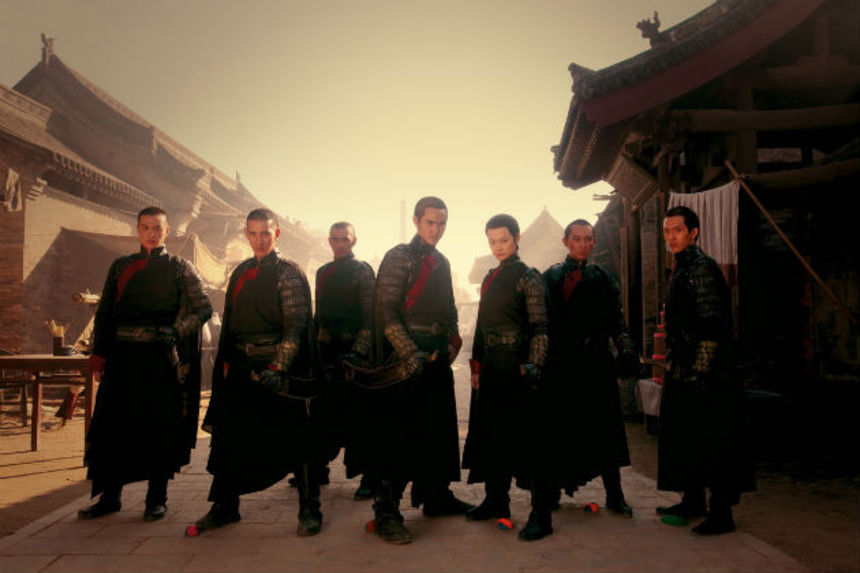 It has been a long and bumpy road for Peter Chan, getting his new production of The Guillotines to the big screen.

First announced back in 2009 with Hong Kong's man-of-the-moment Dante Lam at the helm, Teddy Chen then took the reins when Emperor Motion Pictures gave The Viral Factor the green light, only for the production to grind to a halt just weeks before shooting was set to commence. Script issues were cited, but it emerged that Chan had again fallen out with Chen (as was the case of their previous collaboration, Bodyguards and Assassins). History repeated itself, and Chen was replaced by Andrew Lau (Infernal Affairs), but things finally got underway.

Originally thought to be a remake of the Jimmy Wang Yu classic, Master of the Flying Guillotine, the film is in fact a new story, charting the final days of the secret guillotine brigade as they fall out of favour with Qing Emperor Yong Zheng. After allowing a dangerous outlaw known as Wolf (Huang Xiaoming) to escape, the emperor's secret assassins, known as The Guillotines after their signature flying weapon, are disbanded. Their only female member, Musen (Li Yuchun), was abducted by Wolf as he escapes, and so, as daughter of the guillotines' commanding officer (a fan-serving cameo from Wang Yu) and object of captain Leng's (Ethan Juan) affections, the guillotines set off in hot pursuit regardless of their orders.

Along for the ride comes Haidu (Shawn Yue), personal bodyguard to the emperor, who has known Leng since childhood. While his presence supposedly acknowledges the Emperor's blessing of their mission, Haidu has a secret agenda. The guillotines track Wolf to a remote city where the borderline messianic leader is rallying the Han people to resist the Qing rulers through peaceful means. On meeting Leng, however, Wolf recognises that he too is ethnically a Han and urges him to join forces. It is at that moment that Haidu reveals his plans to betray the guillotines. 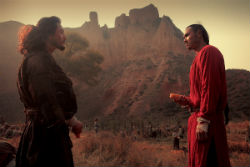 Despite claims that this film is not a remake of any earlier martial arts spectacular with the word "Guillotine" in the title, fans will be forgiven for expecting an epic action spectacle. Marketing for The Guillotines has certainly played up these aspects of the production, but save for a frantic opening skirmish, the titular weapon barely features. In the opening moments, Leng and his men apprehend Wolf, massacring most of his lieutenants in the process. Here the screen fills with flying razor-sharp discs that ensnare, dismember and decapitate their targets in bloodthirsty fashion. Lau actually takes audiences inside the mechanism of the guillotine itself, and you'd be forgiven for thinking you had become trapped inside the Lionsgate or H. Brothers logo, as the camera travels through the computer-generated guts of these weapons. But it's a cheap gimmick that proves more distracting than entertaining.

However, once the dust settles, it is rarely disturbed again, save for horses occasionally kicking 3D-infused clumps of it at the camera as they gallop past. The Guillotines, unsurprisingly perhaps, is far more interested in examining Leng's conflicted loyalties. On the one hand he has been raised within the confines of the royal palace to serve the emperor, as Haidu repeatedly reminds him, but ethnically he is a Han and should be applying his skills to defending these peace-loving people against Empirical oppression. While their conversations get a little preachy at times, this three-way dynamic plays out more like a lovelorn bromance, with Haidu and Wolf competing for Leng's affections. Considering the primary driving force of the plot was to rescue Musen, Leng's supposed love interest, the poor girl is forced to stand idly by while the men compete for each other's impassioned commitment - and by extension - attempt to unite the Manchurians and the Han as one nation.

The film's strongest element is Chan Kwong Wing's graceful and epic score, which does a noble job of adding a sense of dramatic weight and importance to the proceedings of what is otherwise a fairly standard B-movie plot. In fact the script is more reminiscent of Hollywood action movies like Young Guns or Mission: Impossible (it lifts one scene verbatim from The Wild Bunch) than its wuxia predecessors and seems determined to please too many different audiences simultaneously.

Needless to say the result is that it offers a little of everything - action, drama, propaganda, romance - but spread frustratingly thin under a thick glossy sheen. Had the entire film played out like its opening moments it might well have succeeded as a blood-splattered guilty pleasure that would no doubt score highly with Far East action fans, as it is The Guillotines dulls its blade on well-meaning austerity and as a result, just won't cut it.

Review originally published when the film opened in Hong Kong in December 2012. The Guillotines opens in limited theatrical release in the U.S. on Friday, June 14. Visit the official site for more information.