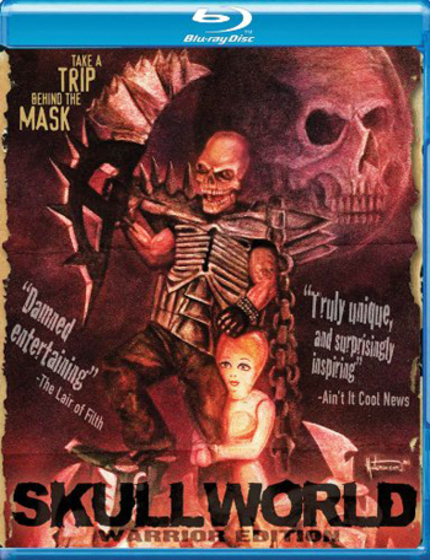 Justin McConnell's documentary Skull World just came out on DVD and Blu-ray! I got my grubby hands on the Blu-ray and would like to share my thoughts with you about Justin's film. But first, a story...

Back in high school I worked at a plant nursery. One day, a customer asked us what we were going to do with a plastic barrel we had set off to the side. He wanted to buy it off us because he said he would cut it up and make armour out of it. He belonged to a live action roleplaying club that staged mock medieval battles. That sounded cool as shit. But holy heck, these industrial strength plastic drums are not cheap. There had to be a cost effective way to create armor that also did not have an adverse effect on the environment after you were done with it.

For real, I never asked myself that question. I still thought the idea of making Knight armour out of a plastic tub then beating the tar out of someone sounded cool as shit back then. I gave a rat's tart about the expense of it and the environment back then. However, who knew I would have to wait 20 plus years for an answer to the question I did not ask. There is a cost effective way to create armor that has less of an impact on the environment and still allows you to beat the tar out of someone. But you will have to venture into Justin McConnell's documentary Skull World to find out how!

Over the course of a couple years filmmaker Justin McConnell follows his friend and president of the Canadian chapter of Box Wars, Greg Somer, with a camera. Combatants here in the Toronto area make suits of armor and weapons out of cardboard then stage gladiator style battles. All weapons and armor are made from cardboard and good ol' Canadian duct tape. Somer and his merry troupe of cardboard clad fighters battle 'wherever Metal music is threatened'. It could be at a bachelor party. It could be at a roller derby. It could be anywhere. Give them a space and they will duke it out there.

McConnell's entertaining documentary first checks in on the early life of Somer, making videos in his mom's basement and the origins of his version of Box Wars. Eventually Somer catches the eyes, and is approached by, the originators of Box Wars, a trio from Melbourne, Australia. Somer's travels Down Under to meet them all is documented in the film where he will be the honored guest at one of their events. Back at home in Toronto one of Somer's dreams is that Box Wars can be turned into some kind of television program.

Now, what elevates Greg above all the other combatants apart from his role as leader of a rag tag cardboard clad warriors is his persona. Great military leaders lead by their bravery and charisma. And Greg's charisma comes in the form of his alter ego. It is a side to Greg that goes back over the years even before Justin met him. At each event Somer dons a Skull mask and metamorphosizes into Skullman! Skullman is this larger than life side to Greg Somer who leads men and women into cardboard battle.

Through a combination of Somer's own home video and footage collected by McConnell over a couple years we get a surprisingly open and honest portrayal of likely one of the realest people you could ever meet. McConnell's chosen point of view is of a person who always looks for the positive moments in life; a man who never lets on how disappointed he is by a low turnout at one of his Box Wars events or that he did not make contact with aliens during a UFO Searching weekend.

Somer is also a spiritual man, searching for meaning and direction in his life through mediums such as tarot cards or drinking a visiting shaman's special 'kool-aid'. And though his notes from the former experience are indiscernible he finds victory in the truth that he did not vomit during the session. He even says grace before meals. He reaches out to all gods and spiritual deities in search of inner peace but also guidance along his path of the Skull.

Somer is also a man of metallic fortitude. He expresses his love for metal music. He expresses his love for the band Clutch, who are not metal but still rock out just the same. Because for Somer it is all about rocking large. He gladly swings his legs off the edges of sanity and the path that lays out before him has been chosen by no one but himself. He is in control of his own destiny and he has it by the balls!

McConnell's documentary has a hefty balance of Box War footage, which include thanks to GoPro first person perspectives in battle. I've seen his documentary in a couple incarnations now and find that he whittled it down to include this generous portion of battle footage but also show many instances where we see the man behind the mask, and what makes him tick. When we first started reporting about this documentary I had said that there was something about Somer that you were just drawn to when you met him. Be it by his charisma and personality, or his 'Yeah, I'm wearing a jean vest with band patches. What of it?' fashion sense, you know when he is in the room. And it turns out that the man behind Skullman is just as interesting as his larger that life alter-ego.

Greg Somer is to Skullman as Bruce Wayne is to Batman. As Clark Kent is to Superman. As Tony Stark is to Iron Man. He is his own subculture's masked hero, sent down (or up) to free us from the tyranny of our mundane lives. Skull World is not just about Box Wars but it is also about someone who lives his life as full as he can and takes every moment to enjoy it; be it as the manic/stoic mix that is Greg Somer, or, the cardboard clad destructor Skullman!

If we all could find those moments in life that excite us, seize them (by the balls if you feel so inclined), and live them out to their fullest, wouldn't life just be a little sweeter then? Is that such a bad thing?

First off... "Realest" is not a word.
Secondly...Every one of us is as real as any other. Some of us are just less interesting.
Thirdly...If dressing in cardboard is grabbing life's balls, then I still think one should not grab life's balls without permission. It's rude.