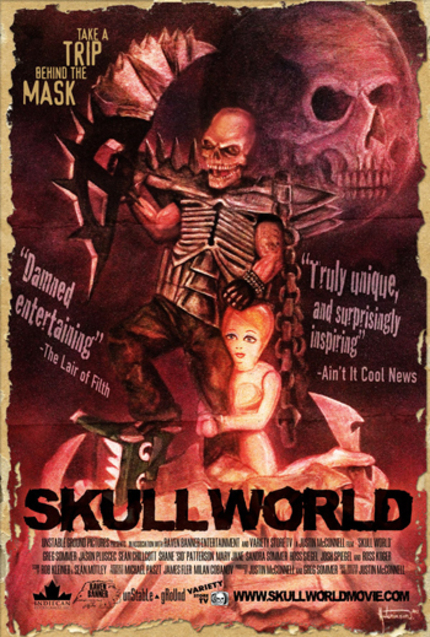 Be warned. Skull Man is coming to a screen of various sizes near you and he's rockin' large!
Hot off its world premiere at the Canadian Film Fest last week Justin McConnell's Skull World has landed a distro deal that will see the film go on a North American theatrical tour. Afterwards, the film will be available on Blu, DVD and VOD on June 18th.

Indiecan Entertainment will partner with Unstable Ground, Inc. on release

Toronto, ON - Straight off of the film's World Premiere at the Canadian Film Fest, the counter-culture documentary SKULL WORLD will be released via a partnership between Indiecan Entertainment (run by the prolific Avi Federgreen), and production shingle Unstable Ground. The film will see a North American theatrical tour launch May 10th beginning at the Carlton Cinema in Toronto, before a release on Blu-Ray, DVD and VOD June 18th

The film "Follows several years in the life of Greg Sommer, aka Skull Man, as he builds the Canadian chapter of Box Wars, an international underground movement of cardboard-based combat." Shot and directed by Justin McConnell (The Collapsed, The Eternal, Working Class Rock Star), SKULL WORLD will be available in North America on a region-free DVD & limited edition "Warrior Edition" Blu-Ray, each loaded with hours of bonus features. In addition, it will be available through common VOD platforms in the US, Canada, UK, Australia and New Zealand.

Indiecan Entertainment CEO Avi Federgreen negotiated the deal with Unstable Ground Inc.'s Justin McConnell, in association with Variety Store TV Inc. "Justin is a great emerging filmmaker in Canada and SKULL WORLD is just a sample of his great work. He's someone well worth watching out for!" Stated Avi Federgreen of the project. Coproducers Raven Banner Entertainment continue to represent the film internationally.

Do you feel this content is inappropriate or infringes upon your rights? Click here to report it, or see our DMCA policy.
Justin McConnellGreg SommerJason PluscecShane PattersonSean ChillcottDocumentaryComedy