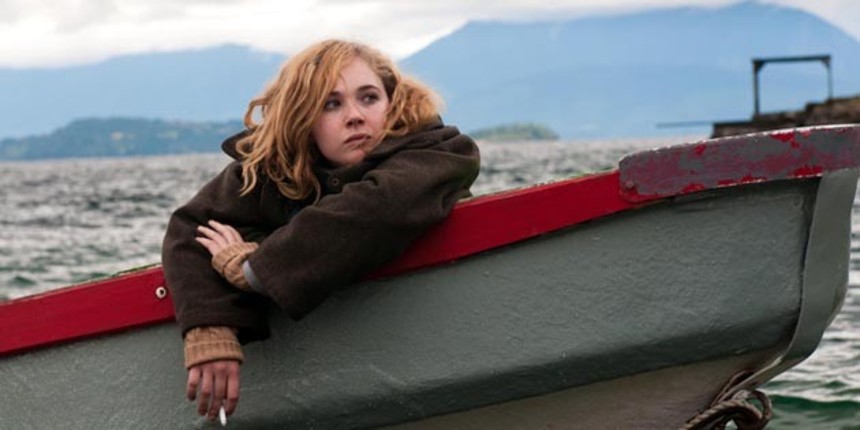 Chilean director Sebastián Silva (The Maid, Old Cats, Life Kills Me) makes his English language debut with this psychological thriller featuring intimidation, hypnosis and maybe just a bit of overwrought villainy on the part of Michael Cera. Maria Full of Grace star Catalina Sandino and Emily "Babydoll" Browning also appear in supporting roles. The film played (quietly) at Sundance this year, and while it never secured a theatrical release, it is coming to DVD/VOD in August.
Personally, I'm still waiting for Juno Temple to become a bonafide star, as the right part has eluded her even as she brings a significant freshness to whatever project she turns up in. None of these (Killer Joe, Cracks, The Brass Teapot, Dirty Girl, Mr. Nobody) got any mainstream notice. While I do not expect Magic Magic to be that film, I'm always happy to see her in anything.

Alicia (Juno Temple), an American who flies into Chile to spend time with her best friend, Sarah (Emily Browning) and becomes an ill-fitting tag along in a group that includes Sarah's boyfriend Agustin and his bitchy sister Barbara (Catalina Sandino Moreno).  Accompanying them is Brink (Michael Cera), an American whose social awkwardness manifests in increasingly ugly ways.

Do you feel this content is inappropriate or infringes upon your rights? Click here to report it, or see our DMCA policy.
Emily BrowningJuno Templemagic magicMichael CeratrailerSebastián SilvaCatalina Sandino MorenoThriller

Juno Temple delivers as always, but I love how Michael Cera is in the trailer. Creepy, nothing like his previous roles. Looking forward to this.