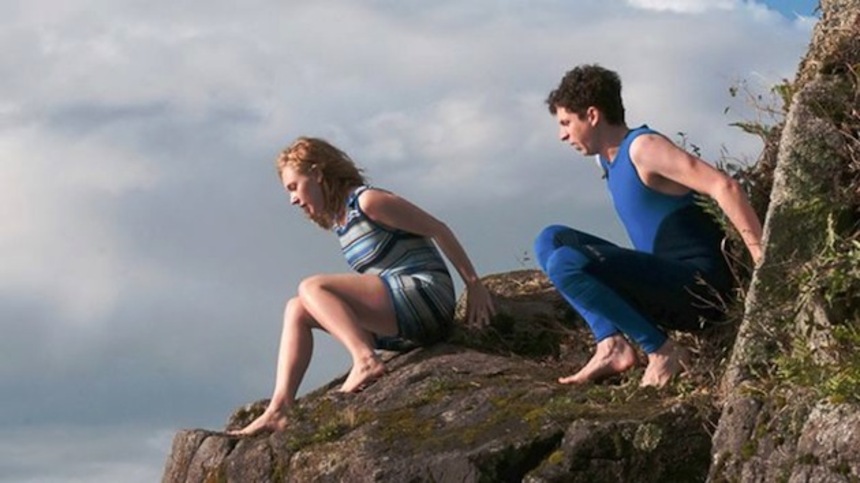 We get to a point midway in Sebastián Silva's empathy endurance test, Magic Magic, where Alicia, a blonde girl in a bathing suit is standing on the edge of a cliff, alone. She goes through the motions of trying to work up the resolve to take the plunge into the ocean several meters below.  She laughs uncomfortably, a touch of hysteria, has awkward stop-starts that involve jittering hand movements and unflattering body language. Below, her companions have already made the jump and are waiting for her.  Their words of encouragement eventually move to increasingly less polite cries of "Do it, already" or "Finish something you've started." Cut to an awkward boat-ride back to the cottage. This scene might be the litmus test on whether or not you will accept the particularly horrific odyssey of the film. Are you frustrated with young Alicia's failure to execute, or are you deeply sympathetic to her discomfort and awkwardness?

Magic Magic is a horror film of social norms and narcissism in equal measure, one where the horror comes from the discomfort of the lead character in a situation that slowly, deliciously, spirals out of control. The movie is quietly obsessed with spirals (and mirrors), and at one point someone says, "Relax your eyes and stare at the centre." Stay for the closing credits.

Alicia is played by Juno Temple, one of the more fearless and versatile young actors working today and here she delivers a memorable descent into that unhinged and hysterical state of mind that horror movies seem to impose on women. This happens meticulously as a result if exceptionally tight filmmaking. One guesses that Kier-La Janisse who penned a full book on the subject, House of Psychotic Women, would be a fan of Silva's film.

After a long flight, Alicia arrives in Santiago to meet up with her friend, Sara (Emily Browning).  Along with Sara's boyfriend, Agustín (Agustín Silva) is his sister Barbara (Maria Full of Grace's Catalina Sandino Moreno) and another American named Brink (a boorish and freakish Michael Cera). There is already  stress in the air, because the group is running behind schedule and there is a 12 hour drive to pick up one more passenger and make the boat to the destination of their island cottage.  The group argues in Spanish until Sara insists, in English, that Alicia be allowed to grab a shower first, further increasing tension.  Language, in particular Alicia's lack of ability to speak Spanish, and the casual rudeness of her hosts to accommodate her even though they are all capable of English brings things further a boil, but the film is only getting started. Anyone who has gone out of their comfort zone traveling has probably experienced this sort of low-level anxiety when left out of the conversation by this barrier.

A set of convoluted reasons force Sara to leave the car-ride en route, and catch a bus back to town alone. Alicia is now stranded with people she doesn't know, who are already slightly pissed at her, and refuse to speak in English to her, unless in a somewhat passive-aggressive way.  She tries to be helpful with music in the car, but breaks the CD player such that Minne The Moocher plays on repeat. Cab Calloway's wonderfully catchy song used often in films, has never been used quite like this.  And then there is creepy Brink whose weird body language and incredibly awkward flirting is enough to put anyone on edge. Alicia shrinks into a nervous ball of self-consciousness, desperate for Sara to return to bail her out. Time slows.  Insomnia sets in because she never feels comfortable and her hosts certainly are not taking her home. Trapped on an island with no cellphone and no life-line but these crazy people who seem to be constantly picking at her, every sensation felt by Alicia is heightened to the point of madness.

Shockingly, all of the above is merely the first act of the film. From there on out Silva piles on ever more audio-visual atmosphere, tense social situations, and handsome exaggerations of the beautiful forested island, courtesy of ace cinematographer Christopher Doyle and partner Glen Kaplan. The island, its inhabitants and creatures all seem in league against an increasingly wild-eyed Alicia.

How much you may loathe all of these crazy people, or take a bleakly comic bit of schadenfreude on Alicia's wilting wallflower, or give up all together and write everyone off as horrible human idiots (Chilean passive-aggressive posturing vs. American entitlement) is the mirror mirror that Magic Magic is holding up to the audience. Hell is other people.

Comparisons from Fabrice Du Weltz's Calvaire and Vinyan to Polanski's Repulsion and Rosemary's Baby spring to mind. Silva's screenplay carefully builds one scene to the next, subtly suggesting reasons for what is happening and why characters are making their decisions. This makes it worthy of the best of 'hysterical female' pictures, but the film makes an effort to go even further. There are some wild and surprising shifts in where our empathy may lie when the film builds to its final, inevitable conclusion.

Overall, Silva's film is a smart study on how easily things can get out of control, exceptionally high on craft, and with excellent performances across the board. In that case Magic Magic is very much a cliff that is worth jumping from.