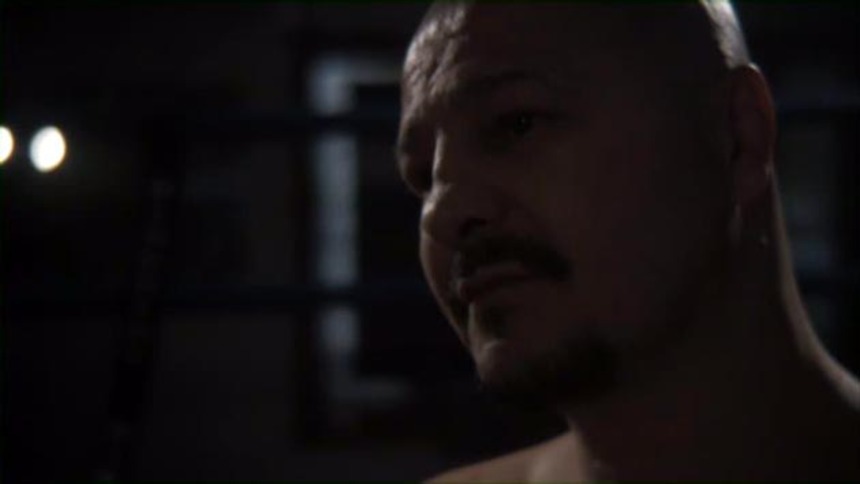 Johnny Tapia, the man, is a haunted character whose entire life and body is shaped by the violence that surrounds him. Tapia, the film that tells his story, is a similarly grim affair. Like James Toback's Tyson, boxing is here portrayed as a gruesome sport in which the champions achieve success by drawing from personal reservoirs of pain. The poverty, alienation and loss that the fighters experience in their childhoods is transformed into a redemptive violence that takes them to new heights of fame and a sense of self-worth. But, as Tapia shows, those born and bred in violence can never escape it.

When Johnny Tapia was a child his mother was raped and stabbed 22 times with an icepick. Throughout the course of the film, he frequently returns to this story, alternately lamenting her loss and fantasizing about mauling the murderer. For him as a fighter, the story is a pool of despair that he returns to frequently in order to fuel his flurries of body blows and deadly left hook. Watching him and hearing his pinched and shaky voice return again and again to his mother's murder, it's easy to understand his pain. He has immersed himself so completely in this violent narrative that even his successes in the ring can't bring him peace. He is a raging cocaine addict, he suffers from bipolar disorder, and he's tried to commit suicide several times. The repeated blows to the head don't help. Like Tyson, the film takes a minimalist approach -- aside from an extensive interview with the battered Tapia in a dimly lit gym, it's primarily a mélange of news footage, highlight reels, and home videos. This form -- mano y mano -- plunges us into his world. And a distressing world it is.

Unlike Mike Tyson, however, Tapia's successes didn't occur on a world stage. Growing up in Albequerque and achieving his first fame as 114 lb fighter in the Super Flyweight division, his fame extended primarily to the Latinos of the southwest and those who followed boxing through its relative decline in popularity in the 90s. As a result, "Mi Vida Loca" Tapia's story has a distinctly local flavor. Grainy news clips from local TV stations have a way of looking thin and depressing - more so when they are used to illustrate the peak of success. To someone who knows little about boxing, the titles that Tapia wins and the technical aspect of victories by decision are confusing. With only these grainy visuals to go on, you're forgiven if you feel a little confused about what exactly it is that he's accomplishing or why it's meaningful. Fortunately, Tapia has plenty of charisma in the ring. It's easy to appreciate the way he taunts his opponents by grinning condescendingly when they miss their punches or the way he hypes the crowd by raising his fists and doing backflips.

This charisma is less apparent during the long monologue segments where he talks about his religion ("God is on my side") or about how "boxing saved me." This perhaps has less to do with the man than it does the filmmakers. The movie seems to want to take the traditional sports narrative of triumph in the midst of adversity and present it in the bleakest possible terms. The soundtrack is lifeless and dead; an ominous synth and tinkling piano that drones throughout the entire film acquiring soft clichéd drums during some fight sequences. When we finally hear some Latino music during a montage of Tapia's victories at the height of his career, it's as though someone applied the defibrillator and brought the movie back to life. By going so deeply into the mind of the depressed and often suicidal boxer, director Eddie Alcazar runs the risk of alienating us from the community that loved him and spurred him on to his successes -- a big part of the story. There is an almost unhealthy fixation on the tragic aspects of the man's life. For example, we are introduced to Tapia's best friend and brother-in-law only when he dies in a car wreck. Without getting to see the evidence of their relationship onscreen this death becomes only one in a long procession, and the dramatic impact is lessened.

One result of the documentary's narrow focus is that even at eighty minutes it feels a little too long. Perhaps it would work better as a 30 for 30 style hour-long program. In its current form, repetitions crop up that leave one wondering about themes that the film never addresses at all. Did boxing really help Johnny Tapia or did the constant battering of his head hasten the effects of his bipolar disorder and depression? Was he exploited by promoters (as is alluded to) or did his lifelong dedication to the sport have a greater meaning for the community he came from? Alcazar never asks these questions and the film presents no answers. Instead, Tapia gives us only a dark biography straight from the troubled source. We're left on our own as to what to make of it.