Wong Kar Wai Is Now A 'Commander' In France 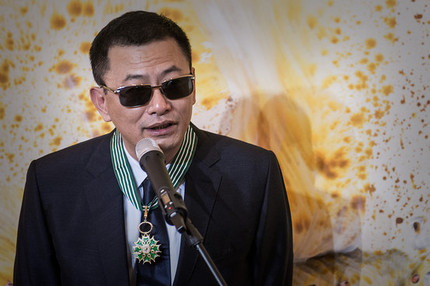 It shouldn't surprise anyone that the French have long been head over heels for Wong Kar Wai's signature blend of Nouvelle Vague playfulness, melancholy and culture-specific subject-matter. But the country has gone ahead and confirmed it again anyway, having just given the director the highest cultural honor in France, the Commander of the Order of Arts and Letters. This award comes after he was made a Knight in France's Legion of Honor in 2006, so apparently not even My Blueberry Nights diminished his standing in the eyes of the French Ministry of Culture.

The award of Commander is the highest honor awarded by the French Ministry of Culture, topping the arts and letters hierarchy just above Officer and Knight. Meanwhile, The Grandmaster is entering its third week of release in France, having taken in a very respectable $2.1 million so far. It will be released in the US later this year.

Do you feel this content is inappropriate or infringes upon your rights? Click here to report it, or see our DMCA policy.
Commander of Letters and ArtsThe Grandmasterwong kar wai