Review: NOW YOU SEE ME Is Incredible, Not in the Good Way 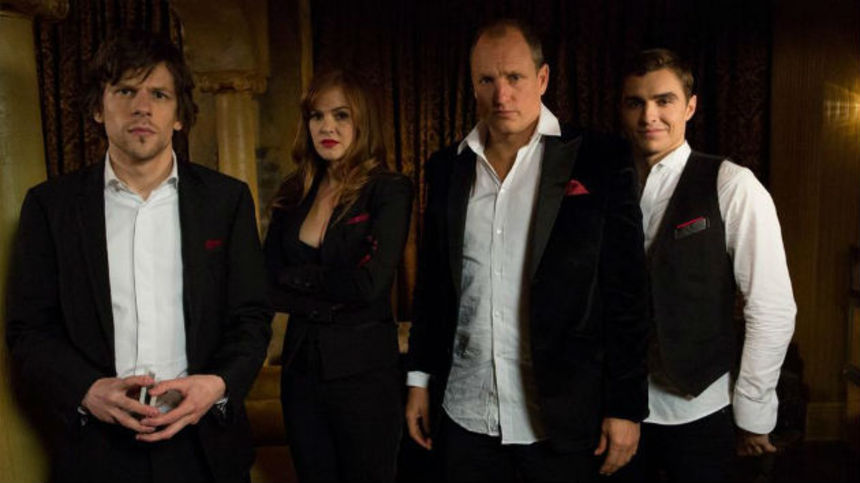 When you see a magician do something in a live show that seems impossible, you know there's a trick to it. Either he didn't actually do the thing he pretended to do, or he did it by some method other than the impossible method he pretended to use. You may not be able to figure out how the trick works, but there's no question that it IS a trick.

When you see a movie about a magician who seems to do the impossible, the explanation is much simpler: it's a movie. They have editing, camera tricks, and special effects at their disposal. That's why movies about magicians, if they want to be credible, have to stay within the realm of illusions that can (or could theoretically) be performed in real life. Otherwise, our default reaction is to assume that filmmaking fakery was used instead of sleight-of-hand or misdirection, and the fun of the trick is gone.

That's if the movies are credible. Now You See Me is incredible, in the old-fashioned sense of that word, a frustrating missed opportunity that squanders a fine premise and a great cast with a story that gets more preposterous the longer it goes. (Actual note I jotted down near the end: "No. Too much.")

The promising premise is that four magicians of varying styles and abilities are assembled by a mysterious benefactor. J. Daniel Atlas (Jesse Eisenberg), a flashy street magician, becomes the leader of the quartet, probably by virtue of being the mouthiest. The other three are Henley Reeves (Isla Fisher), Daniel's former assistant and girlfriend, now doing piranha-tank illusions for hooting audiences of bros; Merritt McKinney (Woody Harrelson), a hypnotist, mentalist, and huckster; and Jack Wilder (Dave Franco), the youngest and least experienced of the group but the most enthusiastic.

Calling themselves the Four Horsemen and promoted by a tycoon named Arthur Tressler (Michael Caine), the illusionists don't know who summoned them in the first place, but they follow his or her intricate instructions to the letter, resulting in a glitzy Las Vegas show that culminates in -- or so it would seem -- an actual bank robbery.

Magicians using their skills to perpetrate crimes? Turning the "how'd they do that?" puzzle that is at the core of all performance magic to their own financial advantage? Playing cat-and-mouse with law enforcement? SOLD!

The film ups the ante even more by revealing how they did it. We won't have to wait till the end to find out; we find out now. Dylan Rhodes (Mark Ruffalo), of the FBI, and Alma Dray, of Interpol, investigate the Four Horsemen after the stunt to see if they can prove criminality, and Rhodes figures out a reasonably plausible summary of how it was accomplished. It is truly ingenious, though already we're wondering if they could have actually done all that. Now the question on everyone's minds (including ours) is what the Horsemen will do at their next show. The feds are watching. Thaddeus Bradley (Morgan Freeman), an ex-magician who sells DVDs exposing magicians' secrets, is watching. The whole world is watching. 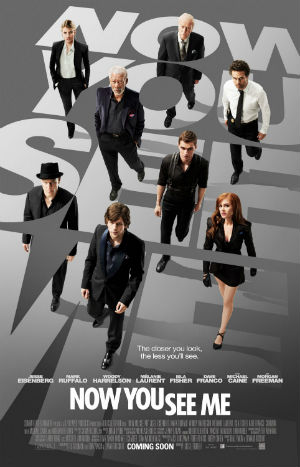 It's around this point that the film, vigorously directed by Louis Leterrier (The Transporter), starts to wobble before flinging itself completely off the tracks. The more we learn about the Four Horsemen's meticulously detailed endgame, the more ludicrous it is. For it to work, hundreds of events, large and small, some completely beyond their control, must happen flawlessly and in the right sequence.

Moreover, some of the things the magicians do simply aren't possible under the laws of time and space currently known to man. Merritt McKinney hypnotizes unwilling participants in a matter of seconds, then controls them with post-hypnotic suggestions so thoroughly that I suspect the writers learned everything they know about hypnosis from sitcoms and cartoons. Daniel is a sorcerer-level pickpocket; Jack can open any lock in the blink of an eye; Henley floats over an audience without wires or harnesses. With no earthly limit to their skills, they're more like superheroes than magicians. The problem is that the movie keeps insisting they're mere mortals. The movie wants us to believe that four talented conjurers could really do these things.

It is interesting to note that Ed Solomon, the first of three credited screenwriters (the other two are Boaz Yakin and Edward Ricourt), has a long career in Hollywood, but almost exclusively in films that are NOT meant to be tied to real-world rules: Bill & Ted's Excellent Adventure, Mom and Dad Save the World, Men in Black, Charlie's Angels Imagine That, and so forth. Now You See Me goes to great lengths to explain the Horsemen's schemes, but the explanations are dizzyingly improbable, and the motivations behind them (when all is finally revealed) are even sillier.

And yet ... I had fun with it. Kind of. Up to a point. The cast is charismatic, and they all seem fully committed to the nonsense placed before them. The story moves jauntily toward its destination; the destination, unfortunately, is a disappointing wreck. But hey, the journey isn't so bad, if you don't expect it to make sense or be satisfying.

Now You See Me opens wide in theatres across North America on Friday, May 31.

Do you feel this content is inappropriate or infringes upon your rights? Click here to report it, or see our DMCA policy.
isla fisherjesse eisenberglouis latierrewoody harrelson