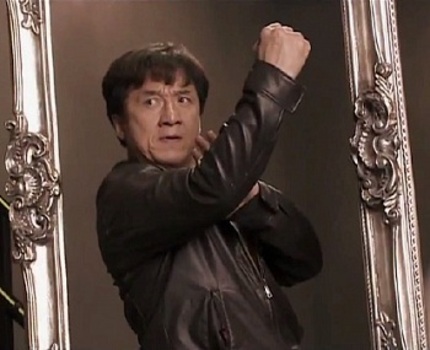 Following the baffling success of CZ12 (aka Chinese Zodiac) at the Chinese box office, Hong Kong action star Jackie Chan has clearly found the confidence to take on Hollywood once again. His new project, Skiptrace, is being touted as a buddy action comedy in the vein of his previous hits Rush Hour and Shanghai Noon, and will see him again team up with a mis-matched Western star - a role that has yet to be cast.
Exclusive Media has come on board to produce and co-finance the film, which will be an official Chinese co-production with CZ12 production house Talent International. Chan is credited as star and producer, with Academy Award-nominated Sam Fell (Paranorman, Flushed Away) named as director, in what will be his first live action film.
The official press release describes the film thus:

Based on Chan's original idea, SKIPTRACE is written by Jay Longino and co-written by THE SITTER scribes Brian Gatewood and Alessandro Tanaka.  The action comedy follows a Hong Kong detective (Chan) who is tasked with tracking down a mouthy American gambler on the run from his creditors. The men form an unlikely partnership and attempt to take down Hong Kong's most notorious criminal, while embarking on a wild journey through some of China's most scenic and exotic locales.

Top Chinese actress Fan Bingbing will also star, in an as-yet unspecified role, in a move that should help build appeal for the film back home while also aiding the actress' bid to break into Hollywood. She has already been cast as Blink in Bryan Singer's X-Men: Days of Future Past and features briefly in the China version of Iron Man 3.
With these parties involved it certainly sounds like Jackie Chan will have plenty of freedom to take on more roles once production gets rolling (he broke the Guinness World Record for most credits in a movie on CZ12). We can expect Chan to act as Action Choreographer in addition to his producer credit, and with Fell handling his first non-animated film, the smart money would be on Chan handling a fair amount of the directorial duties himself once production gets underway.
So, is there still an audience in the West that wants to see Chan re-visit this kind of material? And the bigger question, who should be cast opposite him as the "mouthy American gambler"?
Sign-In to Vote
Tweet Post Submit