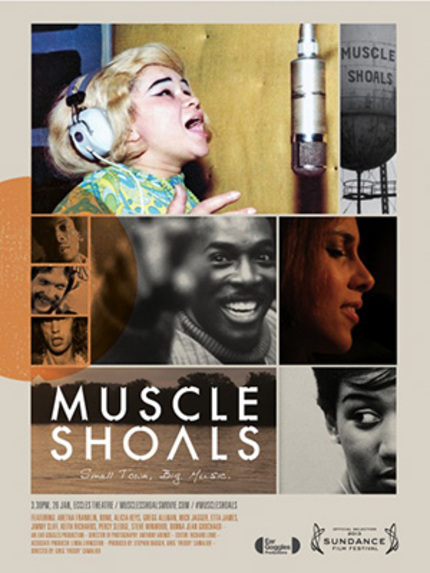 It's a rare thing, the truly engaging music documentary. You have to have a number of things come together to make it more than just a series of clips from some music you feel palatable. The best films are those that transcend simply a jukebox of tunes or talking heads interviews. These rare docs can connect with a viewer on a multiplicity of levels - through rich musicality, a creative presentation, an aesthetically adventurous visual take, and compelling, revealing anecdotes from the participants.

Muscle Shoals is a terrific film, easily sitting along side the greats of this subgenre of music-oriented non-fiction filmmaking. It tackles an enormously important facet of popular music, and does so in both an accessible and yet thorough way. It is robust in its selection not only of relevant musical examples, but in the diversity of participants they get to talk about the magical piece. Like the equally extraordinary Standing in the Shadows of Motown, this look at the astonishing works that came out from this swampy part of Alabama proves to be the definitive take on the subject.

For those not in the know, the town of Muscle Shoals was home to (at least) two of the most important studios for American R&B music. This is where Aretha found her sound, where a series of bands made up of mostly white guys would play the most solid, heavily grooving sounds that would make up this golden age of Soul music. Yet the story of Muscle Shoals is far greater than just what Ertegun and Wexler brought with them after a falling out with Memphis' Stax, for in the rarefied walls and jukejoints of the surrounding area developed a sound that would resonate for decades to come.

At the heart of the film, rightly, is the Godfather of recording in that area. The story of Rick Hall and his Fame Studios has been told before in snippits in other docs, yet it's in this film that his story is truly given space to breathe. With Hall as the lynchpin, we follow through the development of the competing studios as the Swampers, the prestigious Muscle Shoals Rhythm Section, headed off to make their own space.

The breadth of interviewee is tremendous, from a delightfully candid Percy Sledge, to the ever effusive Bono. We here from a slightly reticent Aretha Franklin and a boisterous Jimmy Cliff talking about bringing the sounds of Jamaica to Alabama. Even Mick and Keef show up to spread their love for the "funky place" they called home for a few days when recording for Let It Bleed / Sticky Fingers sessions. Vintage interviews are interspersed to good effect, including a particularly relevant chat with the late Wilson Pickett. The likes of Alicia Keys show up to try and speak to the ongoing lure of the place, and the effect it still has on contemporary practitioners of the soulful arts.

The film's scope covers decades of turmoil and a wide range of recordings over several decades, yet it at its most revelatory when a simple turn of phrase is laid down by those that were there to witness the magic. Perhaps the most eloquent is Spooner Oldham, who refuses to actually talk on camera, showing up to simply sit in front of the vintage Wurlitzer Electric piano and play the notes, those notes, the elegant, swampy shuffle of chords that hit off Aretha's I Never Loved A Man The Way That I Loved You. In this looping legato phrase sits much of what made that space so cherished for so many, and the film seems to capture its spirit in a near magical way.

It also doesn't hurt that the film is also damn pretty to look at. This is a stunningly handsome movie from a cinematography point of view, the mottled sun poking through trees and the churning water offset by the simple yet epic way they shoot Hall and co. makes it seem almost more mythic than the tale already is. The fact that this is the product of a first time director makes it even more remarkable - even at a liesurely running time of 111 minutes, it never feels that it drags, the tempo and caliber of what it's documenting sustained throughout the periods it discusses.

While similarly situated studios like Stax and Chess have had their own attempts at capturing some of the magic on film, their cinematic offerings were not particularly remarkable. It seems that only the twinned stories of Motown's Funk Brothers and the Muscle Shoals studio guys are destined to have such attention and care put into such a film while the main participants are around to tell their stories first-hand.

This is a work that's a must-see for even the most casual of music fans, while still so chock full of moments of grace and beauty that even the most jaded of us that have seen umpteen other variations on this story can still properly fall in love with it. As a film and as a documentation of this vital era, Muscle Shoals is quite simply a triumph, a stunning, soulful achievement. I think it's near impossible for you to leave a screening without a little piece of that Alabama town forever stuck in your ears and your heart.

Do you feel this content is inappropriate or infringes upon your rights? Click here to report it, or see our DMCA policy.
DocumentaryHot DocsMuscle ShoalsMusic Docs