Elijah Wood Carves Through US Poster And Trailer For MANIAC 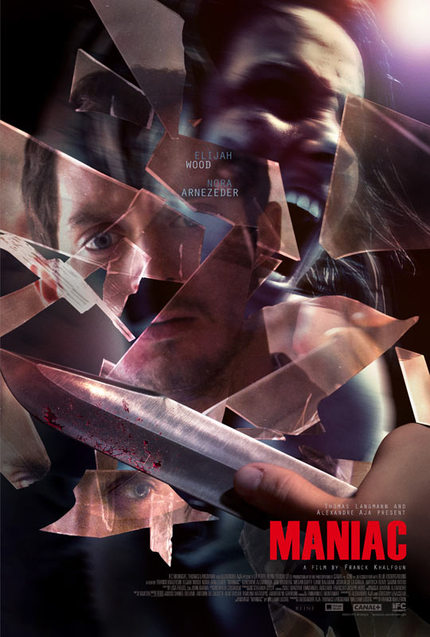 Last year around this time the horror set in Cannes was all abuzz about Maniac, the Elijah Wood starring, Alex Aja produced remake of the cult hit horror film. A year later the film finally has a US release date schedules - June 21 - and a new trailer and poster has arrived for the US market.

A 21st century Jack the Ripper set in the present day, MANIAC is a reboot of the cult film considered by many to be the most suspenseful slasher movie ever made. Frank (Elijah Wood, in a tour de force performance) is the withdrawn owner of a mannequin store, but his life changes when young artist Anna appears asking for his help with her new exhibition. As their friendship develops and Frank's obsession escalates and the number of victims increases, it becomes clear that Frank is far more dangerous than he seems. With a pulsating electronic score by Rob, the film is an intimate, visually daring, psychologically complex and profoundly horrific trip into the downward spiraling nightmare of a killer and his victims.

Wow I had no idea the whole film was first person perspective. Interesting.

Does the US have a late release on this? I saw it about a month ago

Despite the many talents involved - Wood is very good, the music is perfect and the photography is very beautiful and smart - this remake is a huge fail.

The subjectiv camera approach doesn't bring anything except a few interesting moments. The violence never reaches the disturbing and frontal brutality of the original and it's way too clean and neat.

Worst of all, it's terribly boring.

While I can´t speak as to how it compares to the original, I strongly disagree with what you say.

I thought it was a vicious, nasty and technically very well made film, that wasn´t boring in the slightest.

The POV certainly brings a lot to the table, in the sense of voyeuristic pleasure/displeasure, especially for a male viewer, and the general claustophobic feel of the view inside a warped mind.

Again, haven´t seen the original, but I´ll rate this one as at leats a 7/10, but certainly not a feel good movie.

I totally agree about the perfect technicality, but sorry NielsDK, I rarely like remakes and this one is far from the qualities of the original.
But go watch the original and enjoy its realistic violence and you'll see that there is no point about the POV which even lowers the intensity of the movie (except the transitional parking scene).
I also regret that they didn't even try to remake one of the most frightening scene (the women hidden in the closet).
Oh, I also liked the soundtrack...

I´m not a big for of remakes, in general, either, but as I haven´t seen the original, I can´t discuss how it compares.

I can say this, though, even if I feel like I´m repeating myself: It is a pretty nasty film, far removed from the Platinum Dunes remakes with photomodel casts. From what I know of the original, it is treasured for it´s sleazy nastiness, and the acting of it´s protagonist, and not so much for it´s other filmmaking elements (apart from Savinis effects) and whether this one rivals it in nastiness, I can´t say, but it sure is a very nasty film, with a great performance from Frodo.

The POV is meant to claustrophobic, and was, for me, horrifying in that it put the viewer (me) in an even more voyeuristic position, than if it was shot 3rd person. Sure, this isn´t a totally new concept, in gialli it´s been done a lot, but scenes that felt like watching a POV-porn gone horribly wrong, did affect me quite a bit (the killing of the goth chick eg). The key is immersion, just like in a first person shooter, and it worked for me.

You can argue that it didn´t work for you, that the immersion wasn´t succesful or whatever, but saying that it doesn´t have a point, I disagree with. If nothing else, the point would be remaking rule #101: take the concept and story, and do something else/put your own spin on it.

And yes, the soundtrack was great.

The original has got to be way better than what I´ve heard and read about it, if it is that superior to Khalfouns remake :-)