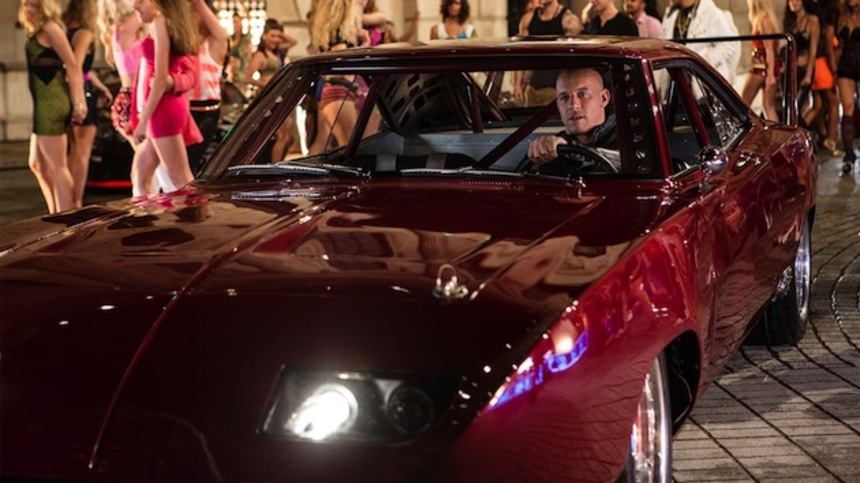 When a movie is as testosterone-soaked as Furious 6, it can accumulate a curious sweetness in spite of itself, fumbling for thoughts it scarcely has the wit to express. Boys have feelings too, made (as any 13-year-old boy will tell you) no less pointed for any total inability to articulate them properly. The Furious movies are what happen when those feelings grow up, get no closer to competent expression, but get bankrolled to the tune of $150 million. (Read Jason's review of Furious 6 here.)

Justin Lin's valedictory for the franchise - he closes the loop on his involvement with fast cars and furious men by, appropriately enough, flashing back (er, forward) to the events of The Fast and the Furious: Tokyo Drift - faithfully delivers every stalwart element that fans of the Furious have come to expect over six films. This means, among other things, ginning up an excuse for Dominic Toretto (still Vin Diesel) to locate and participate in an illegal street race, even though all and sundry are in the midst of trying to locate and stop a gang of car-driving thieves, because the first Fast movie was about street racing, and every Fast movie since has kissed that ring in turn.

For all the external chatter about the Fast franchise migrating to a new genre, these films remain car exploitation flicks. This means that, just as with songs in musicals or fights in kung-fu movies, the racing sequences in Furious become the secret language by which the film's characters communicate with one another. In Furious 6, these sequences of fuel-injected interplay are at their balletic peak when they are between Dom and Letty (the always-welcome Michelle Rodriguez).

Letty is the love of Dom's life, back from the dead, and afflicted with Soap Opera Amnesia - the sort of brain disorder that conveniently wipes a character's backstory but leaves her core skills intact while presenting no further neurological complications or psychiatric trauma. Although it has been marketed as a Dirty Dozen style band-of-outlaws vs. band-of-worse-outlaws action caper, Furious 6 is driven in its entirety by Dom's quest to retrieve Letty from the Dark Side.

(If there is an emotional backstory to Dom and Letty's apparently transcendent love for one another, I don't know what it is, because the movie never bothers to tell me. To a much more credible extent, Letty is Dom's, and he wants her back, the same way he'd want his car back if it was stolen. Immediately after the scene I'm about to describe, Dom and Furious 6's principal villain, Owen Shaw, meet face to face to unzip their flies. I don't know about you, but I heard the thump on Diesel's close-up.)

Having come face to face with Letty in Furious 6's first major car chase (and having been shot in the chest by his ex-love for his trouble), Dom locates an underground street race because he knows that Letty is likely to be there. The sequence opens with Justin Lin's trademark slow-motion jiggle shots as various breasts and buttocks tussle about on gamboling cars, establishing the party atmosphere (and incredible blatancy) of the illegal race while reassuring heterosexual male audience members that they can just think back to the boobs if, at any point, emotions start making them feel stuff. Dom challenges Letty to a race, and they're off.

What follows is Furious 6's only love scene, and it takes place with both participants fully clothed, in separate cars, and driving well beyond the speed limit. Dom and Letty, having acknowledged one another and agreed to race anyway (Dom subtly suggests that, in her pre-amnesia days, Letty paid him various compliments about the size of his testicles), converse across car lengths in low dulcet tones normally reserved for the back row of a movie theatre. When it's race time, Letty only has eyes for the road, but we catch Dom looking sidelong at his love just before "GO!" is screamed, because the object of his race is much simpler. Dom pops a wheelie on his way out - erect and ready to go - and then immediately sets to chasing Letty, who grabs an early advantage and leads him out onto London's nighttime streets.

Lin's camera soars above and ahead of the two cars as they coyly start their mating dance, fidgeting with one another, never touching, not fully committed to the act. We don't know what time it is - the streets are crowded with cars and people, but all of these wipe into a moiré blur as Letty and Dom's twin muscle cars treat the thoroughfare like the asteroid field from The Empire Strikes Back, and streetlights twinkle while engines roar and thunder.

After teasingly allowing Letty to lead for a moment or two of tight close-up gear-shifting action, Dom moves into position and begins to, er, Dominate. He flips her over his proverbial hip, executing what appears to be a Tokyo Drift when swinging around her car on the outside of a hairpin turn in a flurry of movement that Lin frames from high and above, like he's shooting two dancers completing a bolero twirl.

And right here, we enter anti-time for the first of two instances in the sequence - Dom, having passed Letty, catches eye contact with her on his way past, and everything seems to stop, because she's the love of his life; Letty, gravitationally pulled to her former partner in ways her amnesia does not let her understand, falls momentarily under his spell before her competitive (and Evil!) instincts take over again, and she angrily throws her car into fifth. Time returns to normal and we bolt forward again - except now, sexually speaking, Dominic Toretto is on top.

The pace quickens. Police cars enter the fray, providing threat. "Just like old times," Dom intones, calling back to the comfort and satisfaction of an old lover's arms. Lin begins to position the camera low and behind the two struggling vehicles, as they grunt and writhe in ever-mounting frenzies of muscular muscle-car lust. We catch glimpses of Dom's lead car as Letty's laggard swerves and weaves to try to gain advantage, but Toretto is too far ahead, fishtailing wildly with a multiple-car-length lead on his lost love, who is losing ground to the police cars behind her.

And here's where, testosteronically speaking, Dominic Toretto proves how much he loves his Letty in the only fashion he's capable of: bluntly. He chokes his steering wheel and flips his car into a full rolling 180, dropping his advantage on Letty but scaring the bejeezus out of the cops, causing them to spin out in spectacular fashion. And we are left with the height of Dominic Toretto's wordless, romantic art form: two cars, one backwards, one forwards, racing parallel down the midnight streets, pinned together by invisible tendrils of love, like lobsters holding hands.

We enter anti-time again, and now, Letty is as lovestruck as Dom, caught in the same gauzy blur of held breaths and slow motion. Dom reverses his car again, and they each pop their nitrous tanks, orgasming simultaneously - the dopey sigh on Dom's face right here is hysterical - before they both, finally, begin to come down.

Letty waves him in, and in a vacant lot with their steaming cars cooling down behind them, they have their long-awaited post-coital chat, telling each other anything and everything, or at least, whatever their limited language(/screenwriting) will allow - which isn't much. The race, though, the chase, is where the fast and the furious really communicate. As dumb as it might seem, there's something oddly sweet about a jock reading love poetry, even if he's only reading it to his car.

Do you feel this content is inappropriate or infringes upon your rights? Click here to report it, or see our DMCA policy.
Fast and Furious 6Justin LinMichelle RodriguezVin Diesel

More about Fast and Furious 6