Only a week or so ago I'd never seen any of the series that I've dubbed the Fast Furii. Sure, I knew them to be a bunch of eye candy racer movies with action interspersed, but somehow the travails of these petrolheads had slipped me by.

I'm a fan of car chases as much as the next person, but I expected these films to be nothing more than stupid eye candy and interminable and overly ponderous plotting. Still, I gave myself a challenge, and in a short few days I marathoned the hell out of these films.

It's somewhat revelatory to proceed in this manner - the first Fast and the Furious film is exactly as terrible as you'd expect it to be. Rob Cohen's not exactly known for subtlety, but the film has an epic badness that makes it feel even more dated than its 2001 release. John Singleton came aboard to do the slightly less egregious 2 Fast, 2 Furious, a film that managed to expand the narrative in ways that I was surprised to be pleased by, but still felt the need to incorporate interminable cuts of people pushing in clutches and wrenching at gear shifters.

The third film, Tokyo Drift, brings current keeper of the FF flame Justin Lin to the director's chair. With his third film, he sets the narrative on its head, following another character all together through the streets of Tokyo. It's almost more ridiculous than the other two, but despite Lucas Black's laughable incapacities as an actor, it all kind of works, as if the heightened reality of the franchise finally found a filmmaker capable of wringing out the sexiness and silliness of such a project.

At the end of that film, we're teased with the reappearance of Vin Diesel, who shows up in the fourth film Fast/Furious like he owned the place. It took me a while to recognize the time jump, I had just assumed that Lin liked Sung Kang so much that he just recast him as another character. Once I clued in that we'd kind of stepped back in time (with cheeky references by Han to needing to go to Tokyo) it all kind of made sense. It was halfway through number four I realized something shocking - these guys had a plan, a kind of epic, multi-ethnic, multi-episodic arc that would take the saga of the Fast Furii through many trials and tribulations, a core ragtag bunch of dudes always finding ways to do yet another job together.

It may be the first time in film history that the fifth film of the series is the best, which each subsequent episode following its mathematical order in terms of quality (the fourth is better than the third, and so on). By the time of Fast Five, everything's in place - you've got drug lords, street races, insane car chases, and stakes in the millions, all while being chased by some silly government agency run by (of course!) Dwayne "The Rock" Johnson. Pitting Johnson against Vin Diesel is inspired, and the film and the franchise itself felt like it just couldn't get any bigger.

Which leads us inexorably to Fast 6. The title sequence tells it all, a mashup of scenes from the previous films (I seem to recall on first viewing Tokyo Drift footage being conspicuously absent, which makes sense in retrospect). Once again we pick up the pieces from the previous film, leading to a kind of grandeur to the proceedings, and short cuts between characters. For those new to the franchise, I'm assuming such banter would be irritating, but for the initiated it almost feels refreshing, like Lin and his writers actually watched the films they made previously, and give a damn, even if mildly, about some sort of continuity.

This time a series of bad guys are doing some fancy things with cars, so Mr. Rock shows up to bring the boys out of non-extraditionary retirement so that they can clear their names. Naturally, there's a more familial draw, with the telegraphed return of Michelle "I died several films ago" Rodriguez that was teased at the end of Fast 5.

Lin does a decent job at ratcheting things even further - we get hints of those stun guns they launched from helicopters in one of the earlier films in the form of hockey pucks that engage the breaks on the fancy, computer controlled BMWs that the guys are given to chase with. That leads, naturally, to a series of eye candy vintage muscle cars, nitrox infused V8 monsters that growl their way through the streets of London. I swear, the 1969 Daytona, with the redonculous rear wing, is the most befitting out of any of the cars they've ever used on the series. 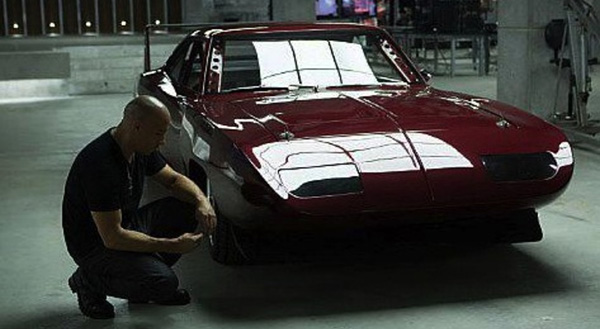 Consider this (and much below) a spoiler, but ...
... I really kind of hoped that they'd find a better excuse than "amnesia" for Letty's character, but it does speak to what level we're working at here. For as much as I'm amused that things kind of hold together, this really does operate on the level of a daytime soap opera. We've got chaste love scenes, bigger than life bad guys with a propensity to telegraph their next moves, and a general run of timeless repetition that's both pleasing and I'm sure limiting.

Still, like some large barreled fuel injection system, Lin managed to inject both plausibility and character development atop of the explicitly insane proceedings. How to turn a safe-dragged-by-car-chase into something even more robust? Why not use a tank? How do we up the stakes from the tank? Well, let's use a giant Russian cargo plane and the world's most ridiculously long runway to stage what feels like a half hour long explosion for the finale.

Yes, Lin manages to ratchet it up to yet another level, but does it continue the trajectory upward, film to film? Well, almost. If pressed, I'd say this is a close tie to FF4, maybe slightly edged out by Fast Five. I for one dislike Rodriguez on screen, and preferred the direction they were taking the Toretto character with his damaged Brazilian ex-cop. Plus, I did find myself slightly more anxious about the length of the runway than I was about the fate of our individuals.

Still, there's a moment of self awareness that I kind of adored in this film, where the slick Tyrese Gibson points out that the bad guys basically match up with our own ragtag bunch. We've elevated the story of a couple of schmucks who street race to a Die Hard meets the Avengers level of comic book insanity, and it's clear that the filmmakers are reveling in just how far they're taking this tale.  Heck, they even make a Hulk reference or two, and the twin battle with the four big guys at the end is kind of priceless, let alone a few Superman-like leaps to save the day.

Having met Gina Caranno at Actionfest last year, it was nice to see her finally on screen. She seemed reasonably capable from an action standpoint, if a little wooden on the acting side (still, I'd trade her for Rodriguez any day!). The Raid's Joe Taslim gets a great showcase scene, even if they don't give him too many lines of dialogue to work with. Still, for some this will be an introduction to the guy (not for the astute readers of ScreenAnarchy, naturally!), and here's hoping there's more big budget cash ins for the guy.

Finally, there's the ubiquitous tease at the end of the film. Luckily, I'd actually forgotten about reading about the casting news here on the site for the seventh film, and I hadn't looked at the comically placed position that the new guy is placed on IMDB. I am amused we're finally in a coherent timeline (1,2,4,5,6,3...and soon to be 7), making this feel somehow even more deliciously epic. They've been setting up pieces for several films now, it'll be interesting to see how it'll all come together.

As it stands, then, FF6 feels almost more transitional than the others. Sure, they all kind of tie together, but it's as if they didn't quite know if it'd be the last of the series, so they went all in at every turn. With this one, it feels in the end just a bit too much like setup for the next film. Still, they've certainly managed to heighten the scope (we've gone from millions to billions of dollars in the heist, for example), but the McGuffin's are steering dangerously close to mid-70s James Bond territory.

Maybe this is the point - we've gone from a film that involved souped up cars, writhing women in bikinis and the desire to get from point A to point B. Along the way, we've managed to involve international governments, incur the wrath of several crime lords, and have paved the way for what may prove to be a confrontation of on screen testosterone that'll make The Expendables look like My Little Pony.

The series will continue to get bigger, no doubt, yet may have slightly plateaued in its meteoric rise of getting better. These guys may claim to live a quarter mile at a time, but the location of that mile keeps changing, resulting in a expanded scope of the narrative that has turned this franchise into one of the most implausibly enjoyable sagas in film history.

With Fast & Furious 6 we've got cars that sound damn cool, a bunch of slick action scenes, semi-coherent character development, all adding up to one of the smartest dumb movies of this or any summer.
Tweet Post Submit

Do you feel this content is inappropriate or infringes upon your rights? Click here to report it, or see our DMCA policy.
Dwayne Johnsonfast and furious 6vin dieselVroom