TV Review: COMMUNITY S4E08, Herstory Of Dance (Or, Much Ado About Britta) 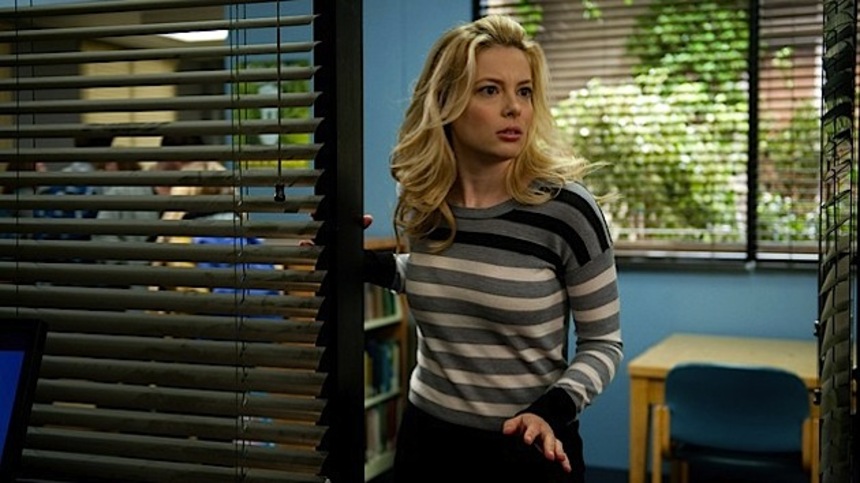 For those of us who have not given up on the show, we're now a few weeks in to settling in moderate comfort to the Community Moses Port & David Guarascio and their writing staff have made. What started out as a doppelganger with two left feet has turned into a keen footed cousin to the Dan Harmon years of the show. If anything Community is feeling a lot like the feel good times at Greendale that we got in Season 1 with sprinklings of some of the zanier elements that had pollinated by season 2. It's now customary for the Dean to show up in outrageous outfits, for Troy and Abed to reflect on past hijinks and for Annie and Shirley to either team up or face off. It's also customary for Britta to make a stand, even in the likelihood that she will fail. Tonight's episode plays up many of these classic Community tropes (which are by and large just inversions of (or, sly winks at) classic movie and sitcom tropes). It does so right on the nose, yes, but that is to make the point extra clear that somethings change and that's actually fine. And by extra clear I don't mean forced.

When the Dean announces a 'Sadie Hawkins' sockhop (shoes must be worn for health reasons) where the girls must ask the boys, Britta takes this as a crime against women's rights and declares she will throw a dance of her own -- A 'Sophie B. Hawkins' dance... or, well what she meant to say was Susan B. Anthony, not the singer of the mid 90s pop hit "As I Lay Me Down". Yep, as any Community fan knows, she totally Britta'd it. And while tonight's episode throws out that term more times than you can shake a racist Pierce at, it feels a lot like spring cleaning of old tropes in more ways than one. Now as much as Britta plays the role of the instigator, tonight's episode also gives considerable focus to Abed. Outside of a lovely maturing turn in the Inspector Spacetime convention episode, Danny Pudi has been largely regulated to second fiddle this season, usually falling into 'Abed on the spectrum' moments way more often than feels warranted. Herstory Of Dance addresses this better than the show has done so in a long, long time in that it just looks at Abed as Abed without much fuss as to whether or not it matters that he's a perpetual outsider or someone who can change and join society proper (Shundundun!). For Abed, this shouldn't matter. Abed is a perfectly capable human being either way. And as they say, love is blind. Or at least wears hip glasses. But more on that in a moment.

Both Annie and Shirley think the dual dances are a perfect opportunity to set up Abed on a blind date. Abed agrees that they may both find a date for him, and thus, turns it into a competition, which by his estimate is what Annie and Shirley wanted all along. Annie's choice is a quirky girl who talks into balloons and hoolahoops, Shirley's choice is a sweetheart from her church. In an effort to balance both dates (classic shenanigans) Abed meets and then employs the help of a spectacled, coat check girl named Rachel played by Brie Larson (United States Of Tara, Greenberg). Shenanigans do ensue... and then some.

Meanwhile, Troy gets in a few good lines before being largely regulated to the background (wearing a mustache for his own hijinks), Jeff is convinced Britta is going to turn the dance into a 'Britastrophe' by promising a group of mid 90s dropouts the real Sophie B. Hawkins, and as it were Pierce becomes a stealth hero of sorts -- a trope they haven't played in a little while.

Nothing was remotely groundbreaking about this episode. Despite expectations that it has to be, Community has never really been a show that's operated from that place, despite operating quite differently than most sitcoms on TV, now or in the past. What worked here tonight was the syncopation and rhythm of the writing to the casting to the acting, to the directing right back to the writing. While Larson's Rachel didn't get much screen time it was just enough to show us that she and Abed had real chemistry, plain and simple. Enough for Abed to be written with a lot of nuance and maturity. So further props for Danny Pudi for bringing it and to the writers for not playing up the 'Abed is weird' card. Abed is weird, but that's because he's a person. And I really hope to see Larson again in her role because she and Pudi were so simpatico, and I just want to see Abed with a girlfriend. It feels about time, and gosh darn this just feels right. Or maybe I'm living vicariously through the guy?

Despite the constant threat of Britta'ing her dance, Britta came through tonight shining (Britta for the win!) and far more endearing than to how she's been written most of this season -- which I feel has been as a more broad and cartoon version of herself. I've always seen Britta and the way Gillian Jacobs portrays her as the one character on the show who struggles against being a sitcom archetype so much so that she becomes some top/down version of one anyway. This to me as an idea and approach is genius. In execution... well... it ain't always been pretty. In her greatest moments, Britta's arguably been the best character on the show, and in a few train wrecks, she's been more embarrassingly used than Shirley or Pierce. Tonight, what we usually expect from her turns into a pleasant surprise, which in turn is how the whole episode plays. It's charming, heartwarming and a little zany in all the old, familiar ways, but it is so pure and so sure footed as to feel really refreshing. It's just different enough to feel that, yes, these are the same people we've known for 3 1/2 seasons, but they're also growing and changing because they're truly believing in themselves and each other. It's really nice to see that unfold in a way that doesn't feel like the Bizarro universe Community. So, yes, I admit it: Change is good. Community is very much proving itself to have a healthy second life.

- I really didn't know who Sophie B. Hawkins was until the second song was played. And I am a child of the 90s. But I never went to Lilith Fair.

- Pierce is now a fan of the American version of Inspector Spacetime, which Abed thinks is an absolute travesty.

- I think this is as good a time as any to mention that I try and aim for Jeff's look (beard and clothes, not so much the hair) most days of the week.

- So the puppet versions of the cast were used on the episode tag as a sneak peek at next week. Are we really getting a full puppet episode? Claymation and video games were enough for me, thank you (Gosh, I think I really do love the less zany season one)