Review: ORPHAN BLACK S1E01, NATURAL SELECTION (Or, Darwin Would Be Pleased With This Kinetic Thriller) 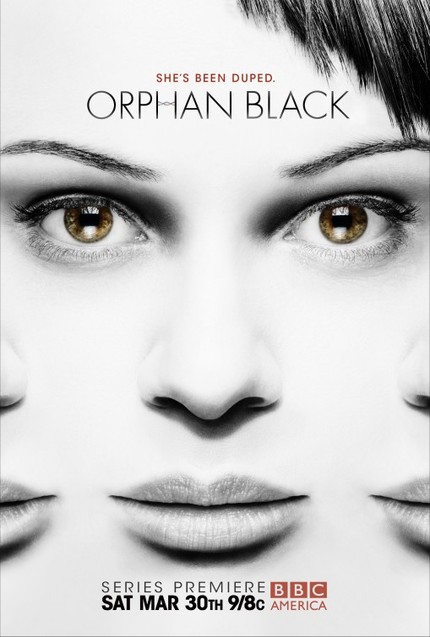 Full marks to the cast and crew of new scifi thriller series Orphan Black - a co-production of BBC America and Canada's Space network - for striking a neat balance between smarts, style and raw, pulpy entertainment value. Science fiction fans are a demanding lot, but also intensely loyal when someone gets it right, and should the show live up to its hugely entertaining debut Orphan Black has the potential to not only find a loyal and vocal fan base among the Fringe and Lost crowd but also to branch out significantly beyond that.

Tatiana Maslany stars as Sarah, a low level street hustler returning home after a ten month absence with a kilo of cocaine and a hankering to start a new life with the daughter she abandoned nearly a year before. But her homecoming is both shocking and strange when Sarah encounters an unknown woman on the train platform - a woman who, other than her clothing and hairstyle, is her exact double. And a woman who, moments after being spotted, steps in front of an oncoming train.

Sarah is shocked, yes, but not so shocked that she would ignore the purse left on the platform, a purse she scoops for a quick profit before hurrying away to meet her somewhat estranged - and flamboyantly homosexual - foster brother, Felix. It's only when Sarah meets Felix that she realizes there may be a play larger than a standard snatch and run here, that - maybe - she can step into this other woman's life and take it all, rather than just the contents of her purse.

And so Sarah becomes Beth, planning to take on the identity only long enough to clear out the dead woman's bank accounts. But things aren't nearly as simple as that. Beth is a cop, for one thing, which places Sarah under immense pressure to keep up the ruse. And her death may very well be something significantly other than a run of the mill suicide. And there is, of course, the matter of their exact - and seemingly non-coincidental - identical appearance.

Orphan Black is a show in which its creators have clearly thought long and hard about the world they are creating and in which they clearly have no intention of giving their audience the time to do the same. It's not that the premise doesn't hold up to scrutiny - it does, and remarkably well so far - it's just that the pleasures of plunging the viewer into the chaos and confusion that comes from Sarah's remarkably rash decision to step into Beth's life are so much more entertaining.

The show barrels along at a breakneck pace, introducing a remarkably well fleshed out cast of characters as Sarah stumbles in and out of situations that she does not understand at all and can barely control with the audience waiting to see when and how she will hit the tipping point and have everything come crashing apart. That it fails to do so is purely because Sarah has a particular gift for chaos and how to create and manipulate to distract those around her.

While the entire cast is strong there's no questioning that Orphan Black rests entirely on the shoulders of its star, with Maslany already called upon to play multiple characters in the very first episode and with the clear promise that there are more coming as the mystery at the core of the show unravels. And Maslany is nothing short of remarkable, providing the goings on with a sense of gravity and grounding at its center that makes the wild premise and pulpy goings on feel somehow entirely plausible. The balancing act she pulls as Sarah-being-Beth is entirely compelling, her own confusion leaking out from time to time and leaving a trail of secondary players convinced enough that she really is Beth to not challenge her while also clearly being aware that something is not quite right.

Orphan Black has set the bar quite high for itself with a very strong debut. Now we wait to see whether it can live up to it's own very high standard.