Now on DVD: MANBORG Brings Retro-Future Sci-Fi Into Your Home! 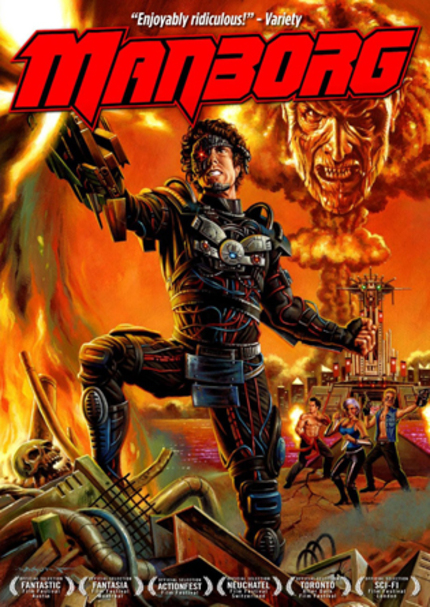 I believe my Manborg review from Fantastic Fest 2011 was the first one published online, and I'm republishing here with notes on Dark Sky's DVD release out today.

Do you remember when Mortal Kombat first hit arcades?  I do.  We were all so impressed with the photo-realistic characters who all had crazy violent finishing moves.  Of course, twenty years down the line, those graphics are incredibly dated, even though the game has lived on in some form or another for much of the time between now and then.   No matter how crappy Mortal Kombat looks today, it still holds a place of high esteem in memories of my younger years for being a trailblazing game.  If you still feel that way about MK, you're likely to enjoy a lot of what Steven Kostanski does with Manborg.

It is the future, and Hell has risen from below and taken over the Earth, led by the evil Count Draculon and his minions.  A ragtag group of rebels is fighting back, but their rebellion is effectively crushed, leaving nothing but scorched earth on which the Hellions rebuild their new world.  After a personal confrontation with the Count, one man gets blasted into oblivion, but manages to survive thanks to the help of a mysterious inventor who turns his bloodied body into a cyborg of destruction, Manborg.

In the even more distant future, Manborg awakens and joins forces with 3 other badass humans in an attempt to destroy Count Draculon and his followers, including The Baron, and a strangely sympathetic human called Doctor Scorpius. Manborg's team, which includes fighters named Justice, Mina, and Number 1 Man, is up against all of Hell in their battle to both free the world from the Count's evil reign and get revenge against The Count and The Baron.

The story is hokey, and the script digresses into broad humor a bit too often for my tastes, but Manborg is still a lot of fun.  The film is built around the framework of films from the late '80s like Cyborg and Nemesis, which feature a lot of man on machine violence.  What sets Manborg apart and really makes it worth watching is the craftsmanship that went into the production, as well as the enthusiasm of the cast and crew for their material.

Astron-6 is a small production company from Canada that has brought other throwbacks to the market like Father's Day, and the infamous Lazer Ghosts 2.  After a long time working on short films, they are just beginning to break into the feature market. Astron-6 and their crews' enthusiasm for their work is astounding.  Manborg features tons of different styles of action and VFX, with particularly impressive stop-motion work from Kostanski.  Most of the film is shot on green screen, however, the obviousness of that adds to the charm of the experience, rather than distracting from it.

What Manborg lacks in budget, it makes up for in heart and soul.  As the film cranked up and the prologue began, I was ready to write this one off, but the longer I saw with it, the better I felt.  Manborg doesn't have a lot of dialogue, though what it does have ranges from cringe inducing to inspired, but it manages to use what brief passages there are for the necessary set-ups.  It does this efficiently and without wasting time.  The entire film runs exactly sixty minutes, which is exactly how long a film like this should run.

If you like your science fiction action with its tongue planted in cheek, Manborg might be the way to go.  The film combines the broad, but topical humor of the '80's New Concorde films with the graphic sensibility of your favorite arcade games from the early '90s and turns them into something fun.  If you ever found yourself running out of quarters trying to beat the Terminator 2: Judgment Day arcade game, but never got far enough to see how the game ended, give Manborg a shot, and I think you'll get a fair idea.

FLASH FORWARD!!
In the 18 months since that screening I've watched Manborg about 4 more times and it's grown on me immensely. Where I was tentative about its brand of humor at first, I'm completely on board now. If I were writing up my top ten of 2011 again, Manborg would find a spot, no question. Now onto the disc...

Manborg comes to us on DVD from Dark Sky and the first question many people will ask is, "where is the Blu-ray?" Save your breath people, Manborg is as lo-fi a project as you're likely to find in 2013, and as such even on SD the image quality isn't great. That's kind of the point though. This isn't a purposely distressed film look like Grindhouse, this is more like a lo-fi SD prosumer look that mimics many of Astron 6's short films from the 2008-2010 era. This is appropriate since Manborg was a 3 year odyssey for the team, a miniscule cast and crew never really topping 10 people. That being said, the image is as good as it's likely to ever get and the sound is also appropriately lo-fi. I have no complaints about the presentation, it all makes perfect sense.

The extras on this disc are impressive and almost certainly cost more to produce than the film's original $2,000 budget. We get a commentary from director/FX specialist/actor/writer/mad genius Steven Kostanski, actor/composer Jeremy Gillespie, and exec producer Peter Kuplowski that is hilarious and informative. We get a few deleted and alternative scenes, some blooper reels, some very impressive stop motion footage, interviews, and a Canadian premiere Q&A. All of those are worth your time, however, there are two bonus features here that really drive home the Astron 6 ethos: the behind the scenes footage and the short pseudo trailer for Bio Cop.

It's hard to imagine what it looks like to make a $2,000 movie these days. We're so used to watching EPKs on films made for millions and millions of dollars that even a $200,000 film seems like a micro budget, but when a crew like Astron 6 puts their own blood, sweat, and tears into Manborg, it's obvious where the $2,000 went. They just did everything themselves, unpaid, for the love of the project. When you watch the behind the scenes footage of the main performers and scruffy director Steven Kostanski making Manborg in an unfinished basement with a couple of chroma key green sheets hung on the wall, you realize that this can be nothing other than pure love. It's partly incredibly inspiring and partly hugely depressing. If a crew of no more than 4 or so people at a time can make a film this entertaining with practically nothing, what the fuck is wrong with the world that we get so many bullshit blockbusters every week? Manborg is the real shit.

Bio Cop, the short feature attached to Manborg (mainly to pad the main feature's 60 minute run time) is equally impressive. This 12 minute short following the painful "life" of the titular science experiment gone horribly awry is hilarious and kind of touching at the same time. Bio Cop's "WHY AM I ALIIIIIIIIVE???" is going to be part of my movie quoting experiences for the rest of my own painful existence, and I can only thank the boys at Astron 6 for that. Now that they have a new project in mind (it's so embryonic that they couldn't even properly explain to me what it was yet), the world better watch it's ass, but let's just say that an Astron 6 giallo would be a mind-blower.

As of the publishing of this article, Manborg is on sale at Amazon for $10. That's as much of a no-brainer as you're ever likely to see. Make it happen, people.