MANBORG Will Fight Again On The Printed Page! 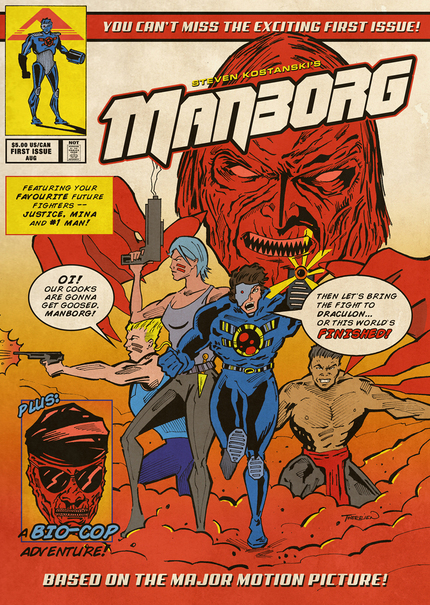 Though the budget may have been small the epic scale of the adventures encountered by Steven Kostanski's Manborg were enormous and clearly the scope of his tale is far too large to be contained by a sole feature film. And so Manborg will fight on, carrying his adventures over into the pages of his very own comic book. An added bonus to hitting the printed page? A relationship advice column penned by The Baron! Read on for all the details! And click the image below for a larger version of the cover!

Cult filmmaker Steven Kostanski is excited to announce that the characters he created with Jeremy Gillespie for the ASTRON-6 produced film MANBORG will be continuing their exploits in between the stapled newsprint pages of a full-colour illustrated comic-book adventure set for release at the Toronto FanExpo this August.

Based on the cult hit film MANBORG, which hit DVD and VOD last Spring with Raven Banner Entertainment in Canada and Dark Sky Films in the USA, the first issue kicks off a two-part story arch in the tradition of newsprint movie comics of the late 1970s and early 1980s. The story picks up during the events of the feature film, expanding the scope of the original film and introducing fans to brand new characters and mythologies, including the true fate of Manborg's brother!

While the story was conceived by MANBORG creator Steven Kostanski, who is also overseeing every aspect of the development of the comic, this time around MANBORG producer Peter Kuplowsky and indie filmmaker Justin Decloux are penning the antics of Justice, Mina, #1 Man and titular Manborg as they continue to battle Count Draculon and his army of Killborgs.

As for the art, Kostanski's memorable and iconic sci-fi/horror universe will be reproduced panel by panel by illustrator and graphic designer Matthew Therrien (http://mctherrien.com), with colours provided by Shira Haberman (http://www.shiradraws.com). Matthew Therrien's work might be familiar to MANBORG fans, as he is responsible for a fantastic illustrated poster tribute to the film.

Matthew Therrien's original cover to the first issue is attached to this press release.
In an effort to more faithfully parody and emulate newsprint pulp comics, the issue will also include a one page faux-comic- advertisement (in the tradition of Marvel's one-page Hostess comic- ads) based on Steven Kostanksi's award-winning short-film BIO-COP, as well as a letters column where fans will receive relationship advice from Manborg's love-struck antagonist: The Baron. Fans can email their queries to megadeathcitybaron@gmail.com and have a chance to appear in future installments of the column.

Issue #1 of MANBORG, entitled NO MANBORG LEFT BEHIND, will first become available for fans at the Toronto Fan Expo (Aug. 22nd - 25th) at the Toronto After Dark Film Festival, Raven Banner Entertainment, Rue Morgue Magazine and Anchorbay Entertainment booths, each one a proud supporter and sponsor of the comic. A digital release of the comic is also planned to follow the initial print run, and details will be announced via MANBORG's Facebook Fan page (www.facebook.com/Manborg.the.movie) and Twitter account (@ManborgMovie). 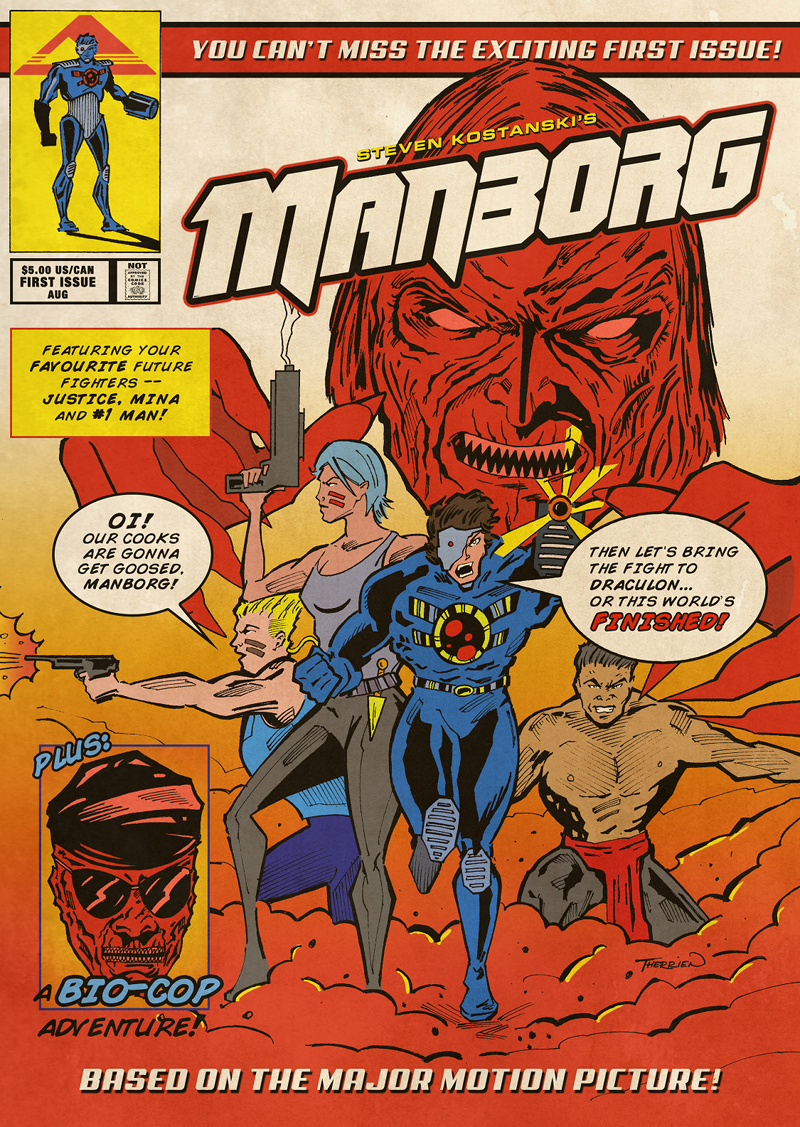