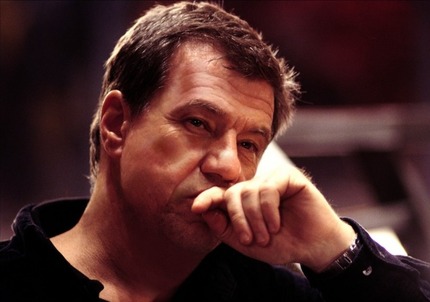 Die Hard and Predator director John McTiernan has been ordered to begin a one year prison sentence by April 3 (eight days from now) ... but not if the French have anything to say about it. Citizens of the country famous for celebrating American genre directors like Sam Fuller and Robert Aldrich have now rallied behind one of the modern masters, hoping to drum up enough public support to make courts re-examine his prison sentence.

A bit of background on how McTiernan got to this point: The prison sentence was ordered in 2010 after McTiernan pled guilty to lying to an FBI agent in response to a case against that the  against Hollywood private eye Anthony Pellicano. The latter was a fixture in L.A., a dapper P.I. with mafia connections on whom all the stars -- including Tom Cruise, Courtney Love and Kevin Costner -- called upon when they needed some dirty work done. Illegal spying, blackmail, fraud -- these were Pellicano's specialties.

McTiernan hired him 2000 while shooting his remake of Rollerball. At the time, production was a nightmare, and McTiernan suspected producer Charles Roven of sabotaging the film, hoping to crush McTiernan's vision and turn it into a disposable popcorn film. The director hired Pellicano to find out what Roven was plotting against the film.

Two years later, the police arrested Pellicano and seized files, harddrives, guns and explosives from his apartment. Four years later, still trying to build the case, McTiernan received a call from someone claiming to be an F.B.I. agent who questioned him about his knowledge of Pellicano's wiretapping. McTiernan said he had none. One source claims he thought the caller was a journalist or someone posing as the F.B.I.

Whatever the case, McTiernan soon found himself in court, where he pled guilty to lying to the F.B.I. and told all he knew about Pellicano. But, since lying to the F.B.I. is a federal crime, he was ordered to a year in prison, a $100,000 fine and three years probation.

Now, as his prison sentence looms, several French film fans, including a few journalists, have launched a 'Free John McTiernan' Facebook page. The page has not only gained more than 2,000 likes in the last week, it has gained support from celebrities including Samuel L Jackson, Joe Carnahan, Brad Bird and Jan Kounen. It has also resulted in articles drawing attention to the director's prison sentence in pretty much every major French newspaper. According to Le Figaro journalist Arnaud Bordas, ""What he did - and if he did, we recognize it's 200% wrong - he does not deserve such treatment. He has already paid enough." He goes on to say, "McTiernan did not call the detective to benefit himself or to harm Roven, but to save the artistic integrity of the film." And dammit, even though I make jokes about them sometimes, that last quote shows why I still love the French.

In any case, if you're interested in learning more about the cause, check out the "Free John McTiernan" facebook page (link at the end of this article). Here, you'll find a completely translated article from L'Express which, at the very least, raises some serious questions about the validity of McTiernan's sentence.

-- During the last round of Euro Beat, I reported that Isabelle Adjani had quid Abel Ferrara's film about the Dominique Strauss Kahn sex scandal, which is still set to start Gerard Depardieu. Well, meet her replacement. Jacqueline Bisset (Bullit, Cul-de-Sac) has signed onto play the role of DSK's wife, Anne Sinclair.

-- More legal trouble, but this time in Britain. The bosses of Evolved Pictures have both received prison sentences for making a low budget movie solely designed to cheat the government out of $4.1 million in taxes. Basically, the claimed the now-ironically-titled film A Landscape of Lies was budgeted at $28.9 million and collected tax credits on that figure, then shot the film for $128,000. They reportedly promised independent director Paul Knight that if he took on the film, they'd fund his next five projects. Knight, who ended up supplying the prosecution with evidence against the producers, is hoping that the film rights will now revert to him so that his movie may still see the light of day.

-- British director Nicolas Roeg is developing a new project described as "a First World War romance revolving around an affair between a young, British Army sniper and a wealthy, French landowner behind enemy lines." Roeg, though relatively quiet over the last couple decades (though his version of Roald Dahl's The Witches is still superb) is best known for making some of the best movies ever during the 70's, including Don't Look Now, Walkabout and Bad Timing. His new project is currently titled At Sunset.

Europe has proved once again that it loves big-budget U.S. family movies with lots of CGI. Oz the Great and the Powerful took the number one spot in virtually every European territory last frame including France, Germany, Spain and the UK. The one exception? Greece. There, Christos Dimas' comedy Akalyptos knocked Oz down to second place.

There was very little activity on the local film front this time. The French version of Seabiscuit (not literally, just in the horse-racing drama-sense), Jappeloup, opened strong in France with $4.8 million. Also, what appears to be the French version of This is 40 beat the real This is 40 by a considerable margin. The Judd Apatow comedy opened outside of the top ten while, three weeks in, 20 ans d'écart is hanging tough at number three, with a cumulative take of around $6 million. Also, interestingly, Hansel and Gretel: Witch Hunters is doing incredibly well in Germany, hovering near the top of the box office still with a total gross of around $12.9 million.
Tweet Post Submit

Do you feel this content is inappropriate or infringes upon your rights? Click here to report it, or see our DMCA policy.
Abel FerreraAnne SinclairDominique Strauss-KahnDSKEuro BeatEuropean Film NewsJohn McTiernan