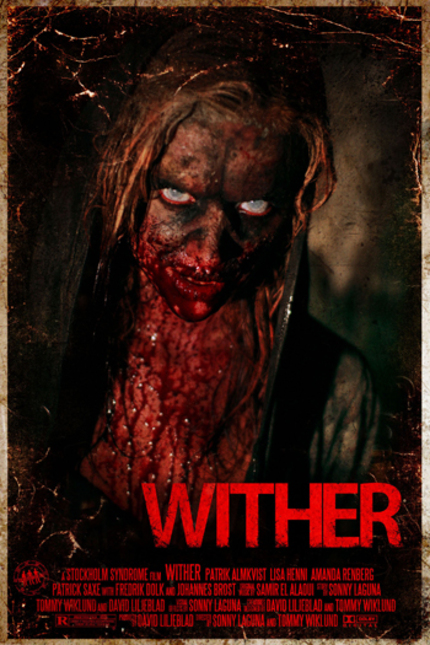 Artsploitation Films has acquired three new international horror titles to add to their distribution lineup. They have added from Sweden, Wither, from Argentina, Memory of the Dead and from Korea, Horror Stories. Artsploitation will release the films either theatrically, by VOD or digital release, and DVD release as well.
I saw Wither when it had it's world premiere at the Lund Fantastik Film Festival. In my review I said, "So the script does not set a new benchmark for originality... But the gore and the violence makes up for it in spades. No, really. A spade does come into play later in the film. But, boy howdy, does the violence more than redeem the typical horror plot. By the end of the second act I was giddy as a Swedish child on Juldagen (Christmas Day). Cinematic violence is clearly where the lads excel. As the evil consumes one friend after another the acts of violence get crazier and crazier. Come for a weekend getaway. Stay for the head trauma".
Dave Canfield saw Memory of the Dead in Austin this past September and has this to say about the film, "Influenced by everything from Dario Argento's Suspiria (1977) to Sam Raimi's Evil Dead II (1987) this bit of occult horror from director Valentín Javier Diment pops like a Tex Avery cartoon off the screen, offering solid laughs and genuinely shocking gross out gore. But it's also helped out by a good screenplay offering weirder than weird plot twists taking viewers who wish to go deeper beyond those surface reactions into some genuine poignancy. What emerges is a disturbing, somewhat disjointed but ultra fun genre flick with a bit of an edge". Then Todd got director Javier Diment drunk and had him write a drunken review of his own film.
Pierce Conran caught Horror Stories at PiFan this Summer. He loved the first of four short films Don't Answer the Door by Jeong Bum-shik, "Jeong's film fondly takes aim at the genre's many overused tropes but even though he pokes fun at what horror has become, his top flight mise-en-scene is so gripping that it added genuine tension and well-earned scares that seem to have been all but erased in recent K-horrors". However, omnibus films are one of the hardest to pull off and Conran concluded, "For fans of horror (especially k-horror) Horror Storiesis definitely worth a look but outside of one very strong segment (the first), offers nothing new and lacks staying power".

(Los Angeles, CA)- Artsploitation Films is pleased to announce the acquisitions of three new cutting edge international horror films all by young and upcoming directors: HORROR STORIES, MEMORY OF THE DEAD and WITHER will all be given full stateside releases by the new label based in Philadelphia. President and CEO Ray Murray said about all three films: "With this trio, we go deeper into our horror series (the other release being Hidden in the Woods). The three films here are truly edgy, stylish and creepy, each have a new delight that we hope even hardened horror fans will embrace."

HORROR STORIES from Korea is an omnibus film which tells the tale of a kidnapped girl forced to tell scary stories to the serial killer that kidnapped her. She tells four stories all made by different directors: Don't Answer the Door (Jeong Bum-shik), Endless Flight (Yim Dae-Woong),Secret Recipe (Hong Ji-Young) and Ambulance on the Death Zone (Kim Gok and Kim Sun). MEMORY OF THE DEAD (directed by Valentin Javier Diment) from Argentina follows a girl as she undertakes a bizarre cult ritual to restore her deceased husband to life - a ritual that will see her home and friends visited by the spirits of the dead. The Swedish WITHER (directed by Sonny Laguna and Tommy Wiklund) begins with a group of young friends who head off to a secluded cabin in the woods only to have their fun weekend turn to a bloody mess when they disturb the resting place of an evil creature.

The HORROR STORIES acquisition deal was negotiated by Erica Nam of Daisy Entertainment/Cinergy; MEMORY OF THE DEAD by Nate Bolotin of XYZ Films and WITHER by Laurent Fournier of NonStop Sales. Jennifer Arndt-Johns negotiated all three on behalf of Artsploitation Films.

About Artsploitation Head Raymond Murray: Murray is the co-founder of TLA Entertainment Group and its president/CEO since its inception in 1981. Over the years, the company has operated art house cinemas and later, award-winning video stores in New York City and Philadelphia. Today, the company runs www.tlavideo.com, one of the country's largest online DVD/VOD sales sites. Murray also founded and continues to be the Artistic Director of Philadelphia QFest and was Artistic Director of the Philadelphia Film Festival (2001-10). In 2000, Murray and partners launched TLA Releasing, a film distribution company that released films in North America. The company expanded its focus with the launch of the genre-focused Danger After Dark label in 2003. In 2004 it opened an office in London and expanded operations in the UK. Prominent releases include Suicide Club, Latter Days, Death of a Dynasty, Another Gay Movie, The Trip, Adam and Steve and Sleeper Cell.

A girl is kidnapped and is forced to tell scary stories to the serial killer who abducted her. She tells four tales...Don't Answer to the Door: A little brother and sister are home alone during the night. The door bell rings, but they're never supposed to open the door to strangers... Endless Flight: A plane flying at the height of 30,000 feet; there is nowhere to run or jump from. What if you're left alone with a serial killer? Secret Recipe: The untold true story behind a good sister and her evil stepsister; a fairy tale told in 2012 giving the true and hidden aspects about the jealousy and lust of two step sisters. Ambulance on the Death Zone: In an ambulance running away from a fatal Zombie virus, who are the infected among the five survivors?

A distraught widow summons, her dead husband's closest friends together in her Gothic home. There she tells them, that with their assistance and love, she will attempt to bring him back to life. But the woman has an ulterior motive; one that involves sacrificing the souls of each of her guests to bring her husband back to life. An atmospheric parody of horror films and a subtle homage of Italian Giallo films, director Diment utilizes a mix of comedy, sex and old-fashioned gore to present a dizzying tale of the occult.

Ida and Albin are a happy couple. They set off to a cabin in the vast Swedish woodlands to have a fun holiday with their friends. But under the floorboards waits an evil from Sweden's dark past.