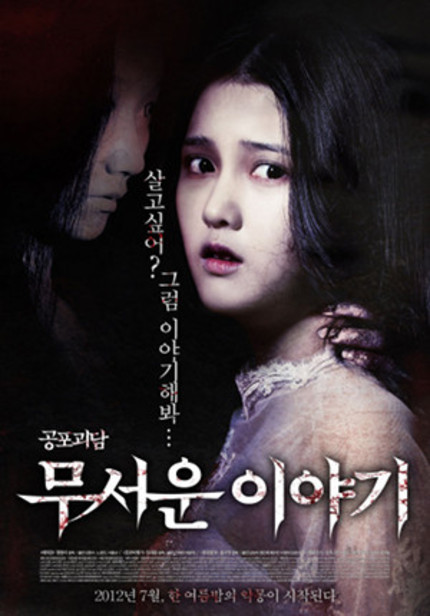 Soon to open the upcoming PIFAN festival, Korean anthology project Horror Stories gathers together the best and brightest young horror talents in the nation. Here's how the festival describes it:

The opening film of the 16th Puchon International Fantastic Film Festival(PiFan) is HORROR STORY, the horror omnibus film of four episodes by five filmmakers including Jeong Bum Shik(EPITAPH), Kim Gok and Kim Sun(WHITE), Hong Ji Young(THE NAKED KITCHEN), Yim Dae Woong(MY TEACHER) and Min Gyu Dong(MEMENTO MORI, ANTIQUE), who finished the bridge cuts connecting all episodes. All four episodes are combined in a film-in-film structure provided by a story of a young girl who is kidnapped by a serial killer who cannot sleep until he listens to a story horrifying to death.

The full trailer has arrived online and it's a solid bit of work. Check it below.

That's a hell of a line up of directing talent. It's good to see at least one half "Epitaph"'s directing duo working again. I guess the downside to the Korean film industry's willingness to give young talent a shot is that it's very difficult for many directors to establish any kind of career.

Looks good. I haven't seen a decent k-horror in a while.