Review: Gorber & Marsh Duke It Out Over THE LAST STAND 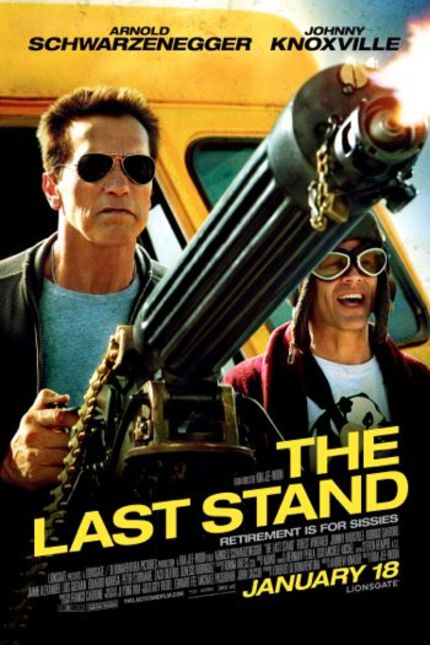 Arnold Schwarzenegger returns to our screens this month in his first leading role since Terminator 3: Rise of the Machines back in 2003. The Last Stand casts him alongside Johnny Knoxville, Forest Whitaker and Peter Stormare in an adrenaline-fuelled neo-Western from South Korean director Kim Jee-woon (A Bittersweet Life, I Saw The Devil). Two of the ScreenAnarchy crew have managed to see the film already, and had wildly differing responses to it.

Firstly, here's what I thought of the film, after catching it at a screening in Hong Kong last night:

Essentially a remake of High Noon for the Fast & Furious crowd, The Last Stand has become a release of interest for two specific reasons. Firstly, but perhaps less interestingly, it marks the first lead performance from Arnold Schwarzenegger following his stint as Governator of California. Secondly, and more notable for me at least, is that the film also marks the Hollywood, English language directorial debut of South Korean uber-stylist Kim Jee-woon.

After giving the FBI the slip, notorious drug baron Gabriel Cortez (Eduardo Noriega) flees Los Angeles for the border in a stolen customised sports car. With an FBI agent on board as a hostage, Special Agent Bannister (Forest Whitaker) can't simply take out the vehicle, and must rely instead on local law enforcement to stop Cortez before he hits Mexico. Meanwhile, Peter Stormare's arrival in the small Arizona border town of Sommerton, with a gang of equally unsavoury types in tow, has piqued the interest of local Sheriff Owens (Schwarzenegger). Before long, simple exchanges are erupting into blazing gunfights with automatic weapons, and Owens is compelled to step up and defend his community.

From the trailer, it appeared that Schwarzenegger's role would amount to little more than "too old for this" shtick, but thankfully that proves not to be the case. At 65, Arnie looks leaner than in his 80s heyday, but certainly appears healthy. 20 years ago, Clint Eastwood would have been perfect as Owens, and Schwarzenegger gives it his all in a role that demands a lot more "acting" than much of his work back in the day. Surrounded by younger, more energetic deputies, including Rodrigo Santoro, Jamie Alexander and the perennially goofy Johnny Knoxville, Schwarzenegger is left to crack wise and shoot guns until the final showdown, and does so with consummate ease.

Kim Jee-woon is one of a triumvirate of South Korean filmmakers who emerged in the early 2000s to lead the increasingly commercial, genre-focused local industry to unprecedented international acclaim. While the likes of Hong Sang-soo, Lee Chang-dong and Kim Ki-duk were delighting the arthouse set, Kim, together with Bong Joon-ho (Memories of Murder, The Host) and Park Chan-wook (Sympathy for Mr. Vengeance, Old Boy), were delivering intense, violent, yet cerebral thrillers to the delight of genre fans the world over.

Following his Shallow Grave-esque debut, The Quiet Family, Kim explored a number of different genres, tasting success in all cases. Be it socially aware comedy (The Foul King), terrifying ghost story (A Tale of Two Sisters) or ultra-cool revenge thriller (A Bittersweet Life), Kim's films proved seminal entries in the New Korean Wave. Kim has made no secret of the fact he is a lover of the American Western. You need only look at his 2008 Korean hit, The Good, The Bad, The Weird to see how much the iconography means to him. As a result it comes a little surprise that his first film on US soil be essentially a modern-day Western, albeit one dressed up as a hot-rod chase flick.

When assessing The Last Stand, the film that comes to mind, however, is not High Noon or even anything from Kim or Schwarzenengger's respective back catalogues, but John Woo's Hard Target from 1993. As it the case here, that film marked the Hollywood debut of an Asian action auteur, who had made a name for himself on home turf as a visual stylist par excellence. Hard Target was also a contemporary reimagining of a black & white genre flick (Pichel & Schoedsack'sThe Most Dangerous Game), set down South with a muscular, accented hero (Jean Claude Van Damme). The result in both cases is an attractive-looking, superficially entertaining action movie that delivers some fun thrills along the way, but retains almost nothing that made the director's earlier work so special.

The Last Stand is not horrible by any means. Once it gets past an uneven opening act and events dovetail towards its climactic stand off, there is plenty of late-night, high caliber explosive fun to be had. That said, at a time when Hollywood B movies have become their A movies, to produce something that is still most definitely a B movie must be considered something of a disappointment. When held up for comparison against both the actor and director's previous bodies of work, The Last Stand is a passable return to hero duties for Arnold Schwarzenegger, but must also be acknowledged as the worst film of Kim Jee-woon's career.

At almost exactly the same moment, on the other side of the planet, my esteemed colleague Jason Gorber was watching the exact same film in Toronto, Canada. His response was somewhat different:

Bless the joys of lowered expectations - I enjoyed the hell out of The Last Stand. Part of it no doubt comes from having just days ago slogged through the truly egregious The Expendables 2, where Arnie and his cohorts lumbered through 80s Action Cinema, all while nudging the audience in the ribs, screaming, "Look at me! I'm making an amusing reference to another series of movies!"

Say what you will about The Last Stand - it's a film that knows exactly what it wants to be. It's got Schwarzenegger as a small town sheriff, it's got a "bad guy 'Batmobile'" in the form of a preposterously transmissioned Corvette. It's got drug smugglers and a Stormare. It's has a Knoxville playing the Jar Jar Binks of the troupe (this is a good thing), and Luis Guzmán walking in slow motion with a machine gun. It even manages to have a love triangle that doesn't feel cringeworthy, including a kiss mid-battle that seems earned.

Most importantly, it's got Forest Whitaker oscillating on screen as the FBI Agent in charge, slamming his fists on his desk in ways that would have made Tony Scott weep and Nicholas Cage angry that he let a prime role slip away.

What Kim Jee-woon learned making the sublime genre mashups The Good, the Bad and the Weird and The Foul King was what made the American films that he'd draw upon click. James Marsh as always does an excellent job above situating Kim's work in the greater context of contemporary Asian Cinema, and I can't fault him for any of his specific conclusions. Yet for me, I'd argue that The Last Stand isn't a pastiche of an 80s film, it is an 80s film, never slipping into parody or becoming smugly self-referential. Sure, the story is preposterous, but it isn't for one second boring, nor is it some ramshackle assemblage of tired references.

Arnie hasn't been this good in close to two decades. This is some True Lies-style fun, perhaps without quite the scope that Cameron brought to that work. The few one-liners that he delivers seem almost fresh and the overt contrivances forgivable due to the tone being pitch perfect. Most importantly, everyone seems to be having a hell of a time on screen.

I knew the film was in capable hands when Harry Dean Stanton wheels up on a beat-up tractor. He's shot like some Grant Wood painting, all gaunt, chiselled features set against a blue sky. In a brief amount of screen time he makes not only a strong impact in terms of performance, but he's captured in a way that makes him seem like a man out of time. Cutting between this and the more Michael Mann-inspired neon gloss of Vegas, Kim Jee-woon exhibits a deft touch when it comes to this sort of thing. If you're open to it, his English Language debut is almost as fun, almost as insane as his lauded Korean genre pics.

With all the nostalgia for films like they used to make, films from an age when things blew up real good and action stars who were bigger than life, it's refreshing to see a film play it on its own terms. Yes, I can compare The Last Stand favourably to Battleship as a film that seems to "get it", while granting that that's not likely to win it many converts. Plus, between this film, Les Misérables and The Dark Knight Rises, it's clear that we're smack in the middle of a "barricade movie" trend.

The Last Stand is a fabulous, turn-off-your-brain ride that doesn't rear up and make you feel stupid. There's a lightness and charm at work that for some reason seems near impossible for other similar films to achieve, a credit to Kim Jee-woon and his collaborators. With the right audience of like-minded people, The Last Stand could well be one of the most unabashedly fun experiences you'll have at a theatre this year.

The Last Stand has preview screenings running in Hong Kong throughout this weekend, and opens officially on Thursday, 17 January. The film opens wide across North America on Friday, 18 January.