Review: BULLET TO THE HEAD Offers Up Cinematic Cotton Candy 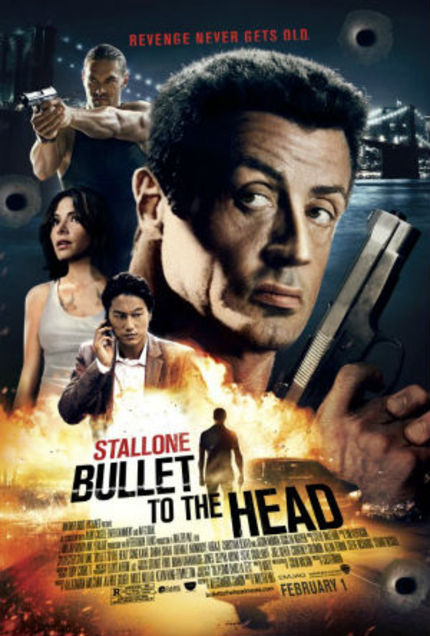 Bullet To The Head is more than just a Walter Hill project, or the newest movie starring the resurgent Sylvester Stallone. It's also shaped by the firm hand of producer Joel Silver, a man not known for keeping his cards close to his chest.

Genre stalwart Hill has said, "Every film I've done has been a Western." However, beyond the obvious ones he's made in his career, such as The Long Riders or Wild Bill, it's hard to see explicitly the "stripped down moral universe" he's referred to in interviews when watching the likes of the gang musical Streets of Fire or the slapstick Brewster's Millions. Nonetheless, Hill has secured his spot in cinema history as a writer/producer on part of the Alien franchise, and he's particularly close to my heart because of how he helped shepherd the look and feel of David Milch's Deadwood HBO show.

Looking over his filmography, it's easy to see many highs and lows, but often there's quite a bit of audacity exhibited by the projects he undertakes, a sense of not giving a damn about prevailing trends and just going for it. When it works, the films are great; when they bomb, they bomb hard.

If the stories are to be true, though, it's producer Joel SIlver who pushed for Bullet to the Head to be a kind of ethnic buddy flick, very much echoing earlier Hill/Silver productions, such as 48 HRS. Instead of Nick Nolte and Eddie Murphy, here we get a beefcake Stallone, the ravages of Human Growth Hormone continuing to twist his face into a macabre scowl, and Sung Kang, veteran of a number of Fast/Furious flicks and the fourth Die Hard movie.

The plot, insofar as there is one, involves D.C. cop Kang shlepping down to New Orleans, where he teams up with hitman thug Stallone in order to expose police corruption. Treme this is not, but the movie does seem to use the streets of NOLA in effective ways, far better than the truly egregious Parker that also tried to inject some Cajun spice into its proceedings.

I had a chance to see the film with a receptive audience at Butt-Numb-A-Thon back in December, and while it was maybe a result of being up for 30 hours and doffing 5-Hour Energy drinks, I really dug the flick. Sure, it checks off a million and one clichés, but it does so in a way that I think is both stylish and commensurate with the way these films played out. Before I saw Arnold Schwarzenegger in The Last Stand I would have said this was the best 80s movie of 2013, but it's still fair to say that it's a delightfully carnal throwback without ever feeling too much like a mere pastiche of the form.

As I wrote, still sleep-deprived after BNAT: "The body counts are high, and the film has clearly gone for a hard-R in a way that will make fans of this type of action shlock happy. At a breezy 90 minutes, it was a fine desert for the entire event, with plenty of explosions and banter to keep things moving right to the end." We even get the likes of Christian Slater making another smarmy character alive on screen, while Adewale "I'm the awesome guy from Oz and let's forget about Lost already please" Akinnuoye-Agbaje struts his stuff as a big, puffy kingpin, and fellow TV prisonmate Jon Seda makes an appearance. Jason Momoa (Game of Thrones) plays the physical foil to Stallone, and it's not a bad on-screen matchup, regardless of real life plausibility, the two grunting convincingly during moments of strife.

In the end, things go boom, punches are thrown, witticisms abound, and there are even a couple moments where cars travel at a high rate of speed. This is like cinematic cotton candy from some small town candy shop - artisinal, sure, and crafted with care and dexterity, but still too overly sweet and sticky to be taken as anything approaching "food." To its credit, everyone seems to know exactly what movie they're in and what their roles are meant to be, and it's done without any obnoxious winking or explicit overreaching to nostalgia.

This may appear to be faint praise, but like the work that Schwarzenegger does in his film, it's nice to see Stallone be Stallone rather than play Stallone - one need only look to The Expendables 2 to see how tedious and uninteresting the latter is.

So, turn off your brain, delve back into the days when your 12-year-old, unskeptical self would watch crap like this on a regular basis, and embrace some shlocky, beefcakey action fun with Bullet To The Head.

Bullet to the Head opens wide in theatres across North America on Friday, February 1.

Bullet to the Head

More about Bullet to the Head