Review: PARKER - This Crime Dud Should Be Illegal 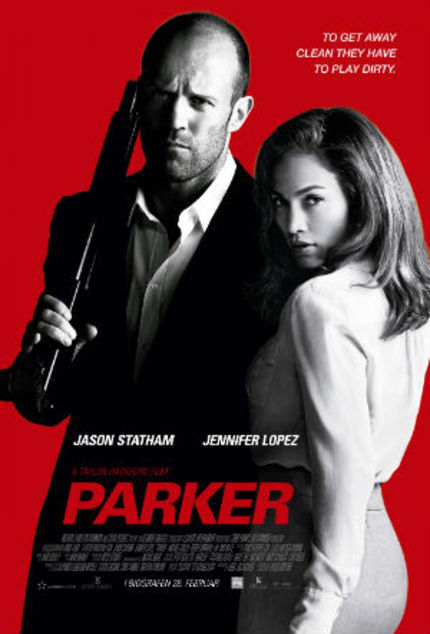 I like Jason Statham, I really do. I mean, sure, he's got the best first name of any actor that has ever lived, but I like the guy. I like that whatever movie he's in, he makes it his own. I like the old Statham from Lock, Stock, and Two Smoking Barrels, I even like the new-ish Statham from The Expendables.

It's a subtle thing, I grant, with his amelioration or differentiation between his performances being a difficult thing to measure objectively. Still, I've noticed a kind of pattern with him, regarding how the first film in a series is often OK, while the subsequent ones become increasingly terrible. One can point to Statham as being the the only guy in The Expendables who seemed to know just what kind of movie he was in, yet his return in the sequel was just part of the complete and utter trash that The Expendables 2 proved to be.

The same can be said for Crank - the first a fun, stupid little film, the second a level of egregious filth that few have ever aspired towards. The Transporter was decent, but the sequel was just mind-numbingly awful, and the third one may be the worst "film," and surely must make a few lists of the most annoying kidnapping plots of all time.

Parker bucks the trend, showing that sometimes, even without being a cobbled-together sequel, the actor is perfectly capable of being in a truly awful film.

Then again, Parker is a sequel of sorts - the character is drawn from a series of novels that has already seen the likes of Lee Marvin (1967's Point Blank, where he played a guy named "Walker") and Mel Gibson (1999's Payback, where he was "Porter") take a crack at a character drawn from a  series of books written by Donald E. Westlake under the (fine) pseudonym, "Richard Stark." According to reports, the author was holding out hope for a real auteur to take this character into a series of films, and they picked Taylor Hackford to direct.

Now, I'm giving Hackford all the benefit in the world here, because I completely fell for Ray. Sure, it's hard to not be swayed by the soundtrack and Fox's eerie performance, but I'll give the director loads of leeway. I grant you that I skipped the Meg Ryan/Russell Crowe smash failure Proof of Life, but even still, I've got hopes every time I see the director's name on a poster that I'll like the movie. Sure, I kind of hate An Officer and a Gentlemen and The Devil's Advocate, and even Against All Odds, but my love of Ray clouds out these other films. I went into Parker with the best of hopes for success from this particular filmmaker.

Finally, there's the other piece of the puzzle, Jenny-from-the-block herself. Now, I never jumped on the hate-for-Lopez bandwagon that set in during her Bennifer phase (instead skipping without malice Gigli and Jersey Girl), but I like to remind myself just how scene-stealingly excellent she was playing against George Clooney in the trunk of a car in Out of Sight. Sure, Steven Soderbergh's got a few tricks up his sleeve that Hackford lacks, but once again I had hope. Even this week, J-Lo was on The Daily Show, telling a nodding Jon Stewart that Parker was The Transporter meets Out of Sight.

No, alas, Parker is not that. It's instead a film without reason for being. It's a film that has one of the more awkward anti-seduction scenes I think has ever been filmed. It's a movie where they hint at some sort of physical relationship between the two people on the poster, only to have JStath actually hooking up with a trashy girl who seems as young as his daughter. For you see, he's a criminal with a code. A guy with a soul. Or whatever, I stopped paying attention after a while.

There's a heist or two in there somewhere, and some gunshots. There are henchmen, and police boats, and incredibly incompetent mobsters, including perhaps the worst hired hit man I think has ever been put on screen. There's even a delightfully inane culminating "big score" that's complicated by raised draw bridges, and (spoiler!) has an escape planned via scuba equipment.

Even more than all these elements, I do like Wendell Pierce a lot, so I'm comforted that he at least got some sort of paycheck. Considering the fact that he's one of the finer actors of his generation, it's kind of sad that The Bunk/Antoine is forced to play a sidekick with few lines is only part of what makes the whole thing somber. Notably, it has a Nick Nolte performance that makes him sound like he's using one of those electric razor thingies that people with tracheotomy's use to buzz-talk.

The worst part of the film has to be the clip teased on various talk shows. A trepidatious Lopez approaches Statham, who grunts, "Take off your clothes." For, you see, he has to check if she's wearing a wire, as was telegraphed the moment he suggested it to her. Lopez strips dutifully, wearing weirdly infantalistic, dated underwear. Sure, she's in great shape, and this scene might just be an excuse for some of her more carnal or lonely fans to give the film a look. Yet when the scene takes its turn, it all feels so cheap, so overtly ridiculous that in some ways it's more offensive than if they had a regular, old fashioned nude scene.

Yes, this one scene is mindbogglingly trite, but it's only one of many. There's a Texan accent by Statham that's improbably worse in context than it was in the comically silly trailer. There's poor staging, irritating camera angles, and a forgettable score. There's a single good bit in the entire film involving a knife and the palm of a hand, and that unfortunately leads to yet another attempt at comic relief.

Alas, Parker is a dud, lacking either the silly fun of Statham's earlier works, or the breezy effortless banter than Lopez showed in the Soderburgh film she referenced. The fact that there's zero chemistry between any of the performers is one thing, but the fact that so much of the film tries to be a character piece while failing miserably makes it more tedious than aggravating.

So, yeah, Parker's not very good. It's not worth seeing on a lark. It's probably not even worth seeing on disc. It's just a muddy mess of a thing, and the only thing that it convincingly stole was almost two hours of my life.
Tweet Post Submit

Do you feel this content is inappropriate or infringes upon your rights? Click here to report it, or see our DMCA policy.
Heist FilmJason StathamJennifer LopezNick NolteParkerWendell Pierce