And Now Sly's Got A Gun: The BULLET TO THE HEAD Trailer Drops 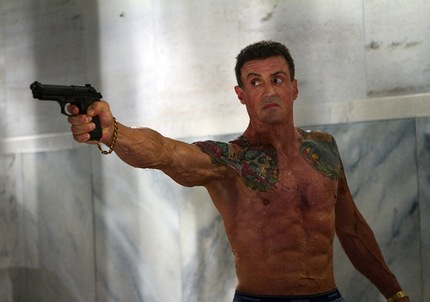 Not to be outdone by his Expendables teammates on the eve of their action-geezer redux flick opening (First it was JCVD, Scott Adkins & Lundgren with the trailer for Universal Solider: Day of Reckoning, and then Arnold with The Last Stand), here's the trailer for the Sylvester Stallone starring, Walter Hill directed Bullet to the Head.

Originally slated for a release last April, our very own Todd Brown reported back in March that it appeared Warner Brothers had knocked Hill off the project once in the editing room, leaving Sly to supervise a final cut of the film. Sly's respone at AiCN was that it was all "an egregious lie." Well, regardless of who did what and how it all went down, the public evidence, thus far, is this trailer. And by golly, it's kind of a mess. A drawn-out, muddled, DTV-style mess that makes The Last Stand trailer feel like an absolute breath of fresh air, rather than just the serviceable trailer that it is. Yeah, Sly knows how to wear the hell out of a suit, and look, he's got some wicked tattoos, but when you have your trailer ramble on and on, well that's a problem 'cause this should be a pretty cut-and-dry action thriller... right?

So, pray tell what is the story? Based on Alexis Nolent's graphic novel Du Plomb Dans La Tete, the film follows Stallone as a hitman who teams up with a cop  (Fast Five's Sung Kang) to track down the common enemy that killed both their partners. Below, you'll find the trailer courtesy of IGN. Am I being too harsh on this one? Call me out if so.

More about Bullet to the Head