International Teaser For Stephen Chow's JOURNEY TO THE WEST 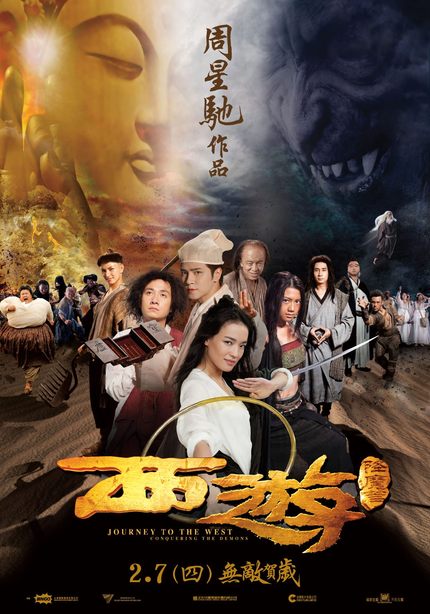 More slapstick insanity ensues in the Taiwanese teaser for Stephen Chow's fantasy comedy Journey to the West: Conquering the Demons.  It features new footage of an incompetent demon hunter getting into all kinds of silly situations.  This marks the first Stephen Chow-directed film without Chow himself carrying the onscreen comedy, leaving Shu Qi and Bo Wong to fill the spotlight.

Based on one of the Four Great Classical Novels of Chinese literature of the same name, Stephen Chow's "Journey To The West" is a contemporary remake of the misadventures of a Buddhist monk as he makes a pilgrimage from China to India. The monk travelled to the "Western Regions" during the Tang Dynasty, to obtain sacred texts (sūtras). The bodhisattva Avalokiteśvara (Guanyin), on instruction from the Buddha, gives this task to the monk and his three protectors in the form of disciples - namely Sun Wukong, Zhu Bajie and Sha Wujing - together with a dragon prince who acts as Xuanzang's steed, a white horse. These four characters have agreed to help Xuanzang as atonement for their past sins.

Do you feel this content is inappropriate or infringes upon your rights? Click here to report it, or see our DMCA policy.
Bo WangcomedyfantasyJourney to the West: Conquering the DemonsShu QiStephen Chow