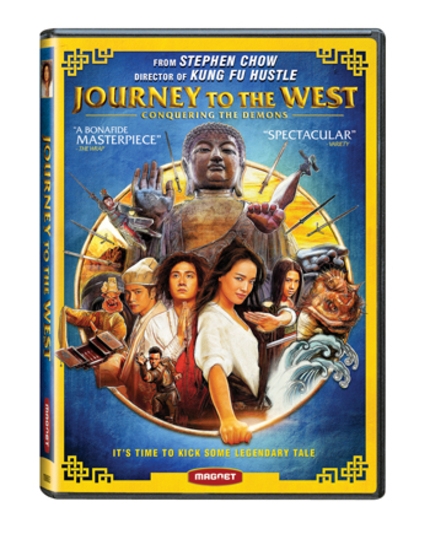 Attention, fans of Stephen Chow here in Canada. VSC has announced their plans for Chow's latest directorial effort Journey To The West.
The film first hit iTunes this past Tuesday, May 13. Two weeks from now (May 27) you will be able to buy your own DVD or Blu-ray copy of his film. You can find all the release specs below. Journey To The West will also be available on VOD that same day.

What's the best method for vanquishing monsters: martial arts or loving kindness? It's a question that goes to the heart of Journey to the West, director Stephen Chow's dazzling comic fantasy about a gentle Buddhist demon hunter.
The latest in a long line of movies based on the 16th-century novel of the same name, this exuberant and delightfully cartoony CGI-fest topped China's 2013 box office.
Beginning with the 10-minute opening sequence -- a triumph of Rube Goldberg zaniness in a rustic fishing village -- Chow's version of the fable, subtitled Conquering the Demons, is propelled by jaw-dropping visual inventiveness. It spins around two mismatched demon hunters. Nursery rhymes are the weapon of choice for raggedy-haired Xuan Zang (Wen Zhang, Love is Not Blind) whose master teaches him that even demons are born good, providing back stories on how they are transformed by hatred after being wronged. Duan, played by Shu Qi (The Transporter) with a kinetic mix of toughness and vulnerability, has no time for compassion; she's a mercenary with a magician's flair for killing and a nifty Infinite Flying Ring.
Their innocence-versus-experience rivalry morphs into Duan's unrequited love after she decides, somewhat incredibly, that he's the one. He resists such worldly matters as sex but starts to get the hang of her smackdown approach to evil spirits, and together they face the trickster Monkey King (Huang Bo, Lost in Thailand).

Do you feel this content is inappropriate or infringes upon your rights? Click here to report it, or see our DMCA policy.
Journey To The WestStephen Chow