Review: JOURNEY TO THE WEST Dazzles, Frightens, And Still Tickles The Funny Bone 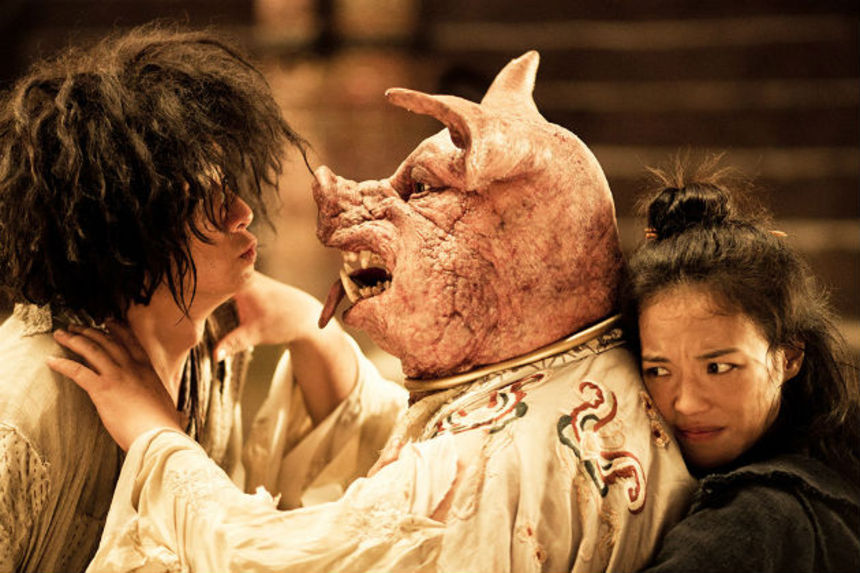 Frequently adapted for the big screen, the latest version of Journey to the West quickly became one of the highest grossing films in China's box office history. That's not surprising, really, given the recent penchant for black comedy in cinema, combined with a classic tale, and the legendary Stephen Chow at the helm. How could it fail?

The film is a prequel of sorts and follows do-gooder demon hunter Tang Sanzang (Wen Zhang) as he tries and fails to lull the evil out of the demons via a Buddha nursery rhyme book. Enter Bai Gu Jing (Shu Qi, in one of her best roles), a rough-and-ready but tired demon hunter who helps him out more times than one. Happenstance leads to her falling for him, but he derides this sort of love, seeking instead to attain higher understanding in Buddha's embrace. He travels to the five-finger mountain to meet the Monkey King (Huang Bo) and learn his secrets, but the Monkey King has another agenda entirely as Tang is put to the test, and his faiths and beliefs questioned.

A simple story and essentially four fleshed-out set pieces comprise the bulk of Journey to the West (original sub-title: Conquering the Demons). Basically, it's one demon dispatch after the other, but each scene is handled with so much energy and wit that the pacing can only be described as breathtaking, as there is literally not a dull moment. Stephen Chow's ingenious sense of comedic timing and witty banter carry the film strongly forward and this would normally be cause for a recommendation on its own, but Journey to the West is also technically dazzling. 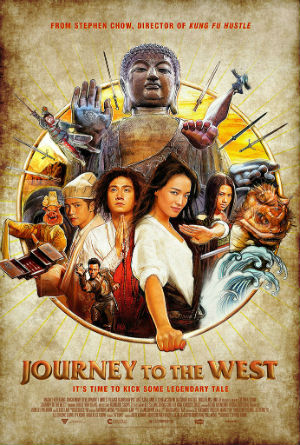 It utilises 3D and visual effects so strongly that they become the narrative, imbuing each scene with purpose and distinction. These effects are the demons and Chow tries something he never properly has before. He actually crafts the film into a dark parable of humanity's latent evil as told through the demons' stories. What he depicts is scary at times, and he follows these horrific sentiments with razor sharp wit. Frankly, Chow has grown as a director -- though note that he is credited as co-director with Derek Kwok -- and this is a striking comparison to his last, child-friendly Chinese E.T, the CGI-fest CJ7, a very average and doting film.

Chow does not actually appear in Journey to the West; a first for him on directing duties, but he essentially instills every other actor on-set with his method and it works brilliantly, from the affable Wen Zhang to the sultry and half-crazed turn from Shu Qi and, of course, the wicked Huang Bo as the Monkey King. All of the supporting cast exchange inane banter and well delivered lines that time perfectly with what is happening, something you'd be remiss for not noticing in every Stephen Chow performance. His career as a director has spanned many years, but in taking himself out of this film, Chow has confirmed he is a truly amazing talent and a huge influence on comedy in general.

Journey to the West is a sublime crowdpleaser, despite the fact that it shifts into dark and scary modes. going places blockbusters do not dare to go, with all guns blazing. The comedy here is for all tastes, and the majority of the film will be appreciated overseas. Do not miss this undeniably fun and striking adventure-comedy masterwork!

Review originally published during the film's theatrical release in Australia and Asia in March 2013. Journey to the West opens in select theaters in the U.S. on Friday, March 7, and will also be available to watch via various Video On Demand platforms. Visit the official site for more information.