For Your Consideration: BATTLESHIP for Best Picture of 2012 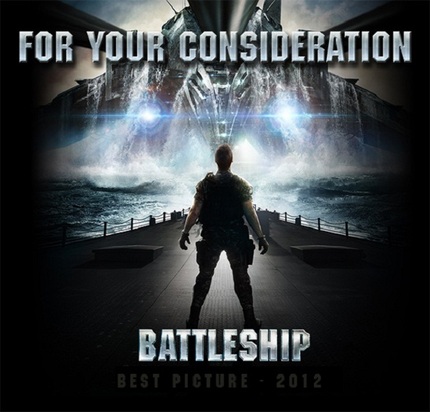 We live in a time when winking, snarky, sardonic Cinema has become the norm, when things like subtext and subterfuge gloss over what are more often than not simply action movies gone wrong. We've seen pixels fighting pixels, groups of Avengers not really avenging anything, a rising Dark Knight that some found risible, all while more earnest, straightforward films that go for awesome over allegory are chided as being foolish things.

No film better exemplified "going for awesome" in 2012 than Battleship. Its conceit was simple, its execution often breathtaking. For its level of success was in its very name, like some platonic ideal that through description we achieve ascription. A film of any other name would not be as sweet, in this work we needed but two things to come together, a compound narrative from a compound word:

We needed battles. And we needed ships. We needed, nay the world needed, Battleship.

Peter Berg has made some fine films, and some even garnered critical acclaim. However, from the outset, Battleship was considered mere kitsch, in no small part due to the leading actor's surname. Yet the film shows strokes of pure genius, from finding a way to use a long-obsolete naval vessel in a modern aquatic battle, to finding a way to turn a beloved board game into cinematic gold.

Sure, some scoffed ("What's next, Snakes and Ladders? Candyland? Tetris: The IMAX Experience?"), yet for every guffaw, there was someone, some right-thinking individualist who just wanted a "Summer" movie where things went "Boom!", where actors committed to their parts with gusto, where Academy Award-nominated thesps chewed up the scenery in ways that would make performers like Wayne, Bogart or McQueen proud, playing their parts in a genre film with earnestness and bravado.

Under the veneer of splashy effects there's actually a story worth hearing, a diamond-in-the-rough Campbellian journey that's as mythic as the oldest tales. If there are to be any accolades, we must also applaud that nameless corporate executive, sitting in some development meeting, who came up with the near Nobel-worthy idea of having the projectiles from the aliens be shaped like the pegs from the game.

It's here, dear friends, that this film goes beyond mere entertainment and becomes something...transcendent. For when the coordinates of the grid are read off, and projectiles launch, one hearkens back to a simpler time, when we would pit our naval strategy against that of our sibling, only to have our PT boat taken out in only two shots. This would often lead to pieces being thrown in the air, followed by ferocious temper tantrums and accusations of cheating. This is the stuff of memory, while Battleship the movie is the stuff of legend.

So in a year where more palpable pabulum will get attention, when other "action movies" mask themselves with scintillating politics or not-so-ancient history to gloss over their core mechanisms of effect, we should celebrate the explicit nature, the unabashed and unapologetic chutzpah of a film that dares to be stupid, yet does so with so much intelligence.

And thus, for your consideration, I ask you to find that Battleship was indeed the finest, best picture of 2012.

Do you feel this content is inappropriate or infringes upon your rights? Click here to report it, or see our DMCA policy.
2012BattleshipBest ofFor Your ConsiderationOscarsPeter Berg