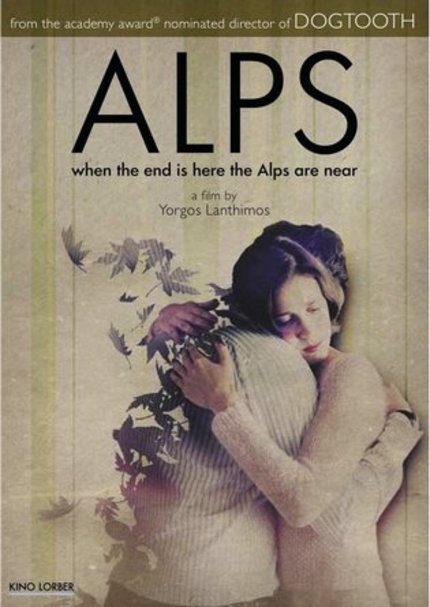 This December the 4th sees the DVD release of Greek director, Yorgos Lanthimos' Alps, the highly anticipated follow up to his Academy Award nominated film, Dogtooth.The film ran the festival circuit for a long time before finally being given a limited release by Kino Lorber over the summer. Our Kurt Halfyard saw it at TIFF 2011 and had this to say:

The business concept behind ALPS is one of role-playing and empathy. People who recently lost a loved one can hire an ALPS employee to impersonate the deceased for a few days or weeks to ease through the grief process. As the film demonstrates exceptionally well, the barrier between indulging a client's grief and devolving into a form of prostitution is a rather thin and permeable one...

ALPS' clients re-create key emotional scenes with those recently lost using other family members and a personal prop or two. An effort to re-live a scene or emotional moment that cannot be accurately ever represented. It may evoke a similar reaction or feeling (as far as the mind knows) but it is a mutant version. If art is, as Picasso famously once said, "lies that tell the truth," these LARP self-psychotherapy sessions are not so much performance art as ghastly acts of self-indulgence. Ones with unhealthy consequence. Providing the service gets addictive enough for the nurse that she would risk her bosses' wrath or perform a little breaking and entering to keep the high going. Her going 'cold turkey' from the tennis player's family is akin to a semiotic meltdown - an apt description of this director's brand of cinema which is violently absurd, and occasionally absurdly violent.

As Dogtooth goes after the idea of how we are prepared to go out and face the world, ALPS is concerned with what we do when we are out there in the thick of things. We all are actors in our varied relationships intimate or otherwise with a seemingly limitless ability to rationalize and compartmentalize, but do we indulge or demand our emotional fulfillment? These questions and more are carried out with a Lanthimos' signature style: Derivative is a word that Greek auteurs do not know.

While Kurt's astute observation of the film is entirely accurate, I found the experience tiresome and more than a bit pretentious.  I saw, reviewed, and loved Dogtooth, so coming out of this film with such a wildly opposing view is not something that I anticipated. I think that the severe reaction to the film that I had is probably something that Lanthimos not only anticipated, but probably also welcomed. The film is not for those looking for a good time, that's for sure, but I think it will connect with some people a lot better than it connected with me.

Alps comes to us, strangely, on DVD only from Kino Lorber. Some people may remember that Dogtooth also came to us initially on DVD only, not appearing on a very impressive Blu-ray until two months later. I don't know that this will happen again, but I still find it strange that there is no day & date release on Blu-ray. That being said the DVD looks fine, but not particularly outstanding, as the film doesn't appear to lend itself to visual splendor in the first place. Similarly, the audio is pretty bland, but effective. I don't necessarily think these are deficiencies on Kino's part, but it's hard to tell. The disc is also devoid of any extra material outside of a trailer, so there's not much added value.

I'd definitely call Alps a rental. I was expecting to love it based upon my feelings for Dogtooth, but instead found it tedious.