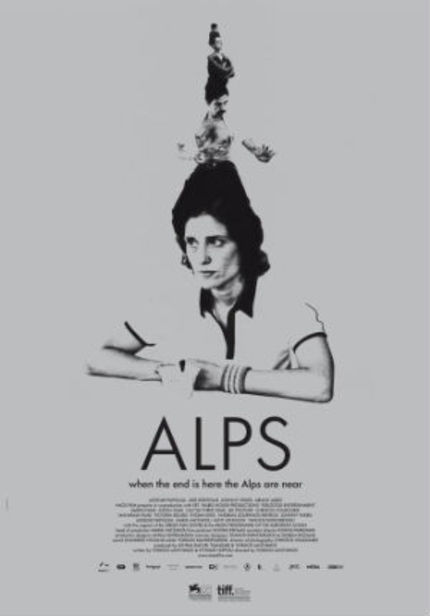 [After a run on the festival circuit, ALPS opens for a theatrical run in New York and Florida on Friday, July 13, so we're republishing our review from the 2011 Toronto International Film Festival. Check the "Related Links" section for two other capsule reviews.]

"There are many types of lighting receptacles, that come in both professional and consumer grades."

"Cold is a word that winter swimmers do not know."

This is the icy-precise line-reading one comes to expect from writer-director Yorgos Lanthimos. Those who got an offbeat intellectual charge out of his weird fable Dogtooth or simply enjoyed the alien-dance moves of actress Aggeliki Papoulia are in for more of the same with ALPS, perhaps a spiritual sequel which features similar visuals and narrative beats. Things are taken out of a singular location of the Greek director's previous film, and the insular family dynamic is scaled up to a group of people who form the eponymous organization.

The business concept behind ALPS is one of role-playing and empathy. People who recently lost a loved one can hire an ALPS employee to impersonate the deceased for a few days or weeks to ease through the grief process. As the film demonstrates exceptionally well, the barrier between indulging a client's grief and devolving into a form of prostitution is a rather thin and permeable one.

The domineering boss of ALPS, a gymnastics coach who does not indulge his star pupil (also an ALPS employee) in song choices for her routines. Instead he makes unexplained demands, "You are not ready for pop music." As CEO of ALPS, he is more like a pimp. When his star employee (Papoulia), a nurse who spots potential clients from the pool she encounters - families attending to their dying loved ones at the hospital - decides to go rogue and take on a customer outside of ALPS, justice is swift, bloody, and arbitrary. It takes the form of a chastising game which obfuscates the use of naked power and authority.

Of the many sights and sounds on display for our amusement and consideration are the book-end displays of gymnastics. The first scored, as an act of counterpoint foreshadowing, to Carl Orff's "O Fortuna" (is there a more overused piece of 'epic music' in cinema?) and slyly puntastic, use of pop-electro hit from the 60s "Popcorn." A game of charades to keep the ALPS rank-and-file in good form. A few client visits and other mini-set-pieces all serve to underscore the fusion of high and low culture; the earnest and ironic execution is how it goes in this new wave of Weird Greek Cinema of which Lanthimos is the undeniable star.

The dying are asked who their favourite actor is (Brad Pitt, Morgan Freeman), the ALPS mission statement is such that the moniker be suitably obscure in purpose, but nevertheless communicate that while the most majestical set of mountains in the would could happily replace such lesser ranges, they, in themselves are irreplaceable. This is not unlike an actor who can easily play a role of a famous figure, or fictional character, but they remain the iconic movie star and celebrity nevertheless. If you want to take that one step further, and consider this is the idiom for which this particular filmmaker makes cinema, it is a meta rabbit hole that might be to difficult to climb back out of.

ALPS' clients re-create key emotional scenes with those recently lost using other family members and a personal prop or two. An effort to re-live a scene or emotional moment that cannot be accurately ever represented. It may evoke a similar reaction or feeling (as far as the mind knows) but it is a mutant version. If art is, as Picasso famously once said, "lies that tell the truth," these LARP self-psychotherapy sessions are not so much performance art as ghastly acts of self-indulgence. Ones with unhealthy consequence. Providing the service gets addictive enough for the nurse that she would risk her bosses' wrath or perform a little breaking and entering to keep the high going. Her going 'cold turkey' from the tennis player's family is akin to a semiotic meltdown - an apt description of this director's brand of cinema which is violently absurd, and occasionally absurdly violent.

As Dogtooth goes after the idea of how we are prepared to go out and face the world, ALPS is concerned with what we do when we are out there in the thick of things. We all are actors in our varied relationships intimate or otherwise with a seemingly limitless ability to rationalize and compartmentalize, but do we indulge or demand our emotional fulfillment? These questions and more are carried out with a Lanthimos' signature style: Derivative is a word that Greek auteurs do not know.