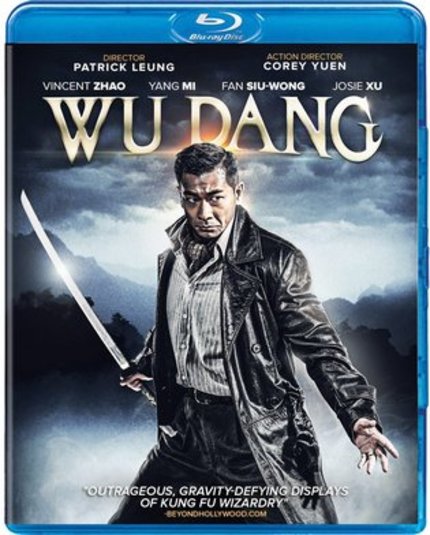 China loves epics. If there's anything that China does unusually well, it's throw thousands of people in a field and film them killing each other. What China is less known for is smaller action adventure films. That is usually the terrain of their southern brethren in Hong Kong. Patrick Leung's (Twins Effect II, Beyond Hypothermia) Wu Dang is a little action adventure film with a spiritual twist. I've read several lukewarm to cold reactions to the film, but I have to say I don't feel at all like I wasted my 101 precious minutes.

The story is remarkably contained, especially for a Chinese film. There is a martial arts tournament every five hundred years at the Taoist temple on holy Wu Dang mountain. When an adventurer and his terminally ill daughter appear to compete, things get a little strange. Daddy is actually at Wu Dang to assemble the mystical weapons from the mountains that could hold the cure for his daughter. But he's not alone in his search. There's also the female thief whose family was robbed of the sacred sword that started the whole mess, and then there's the Taoist monk with dreams of assembling the weapons to make himself into an immortal spirit warrior. All of this leads to clashes between people in the know about the mystical weapons, and the pawns they play in order to distract each other.

One of those pawns, who plays an angelic figure dedicated to his paralyzed mother and the temple, is Fan Siu-Wong (Riki-Oh, Ip Man 1 & 2). Fan is always great to see on screen, and his clean cut look in this film and Ip Man: The Legend Is Born make him look as young as he did when he first made Riki-Oh twenty years ago. It takes some serious stubble to age Fan Siu-Wong. He plays an enthusiastic practitioner of the martial arts, including the sleeping style he has to master to ensure himself to be the victor of the tournament. He's a joy to watch, and his youthful enthusiasm, even as a actor creeping up on 40, is contagious.

The rest of the cast is a lot of fun, as well. No one is going to win any awards for this one, but everyone serves their purpose and moves the plot ahead nicely. The film puts together just enough backstory on the characters and the mythology of the mountain and weapons to provide motivation for not only the characters to act, but also for the audience to willingly take the trip, as well. Vincent Zhao headlines the film, but it's far from a one man show.

I found Wu Dang to be a nice light bit of goofy fun. It's not intended to be Let the Bullets Fly or some other similar big budget flick, it's a tight, contained affair with lots of charm and pretty good pacing. I really enjoyed it.

As usual, Well Go presents an Asian film in peak shape on US Blu-ray. These guys really do have one of the cleanest records on the market. Detail is sharp, color is dense, and contrast is great. No complaints here. The audio is good, but not as raucously effective as some of their other titles, but I don't think Well Go is to blame for that. The small bit of action in the surround channels is well placed, but I think there was room for improvement on the sound designer's part. "A" for effort on Well Go's part, though.

The extras mainly consist of an EPK styled behind-the-scenes featurette in which everyone kisses everyone else ass. However, there is a fair bit of cool making-of footage to be found in this 30 minutes extra, not a complete waste. The film's trailer rounds out the bonus footage, and puts a bow on this decent little package.

Wu Dang is a fun movie, I have to say. Not terribly ambitious, not spectacular in any one technical department, but fun all around. I definitely recommend at least giving it a rent. You might enjoy it as much as I do!