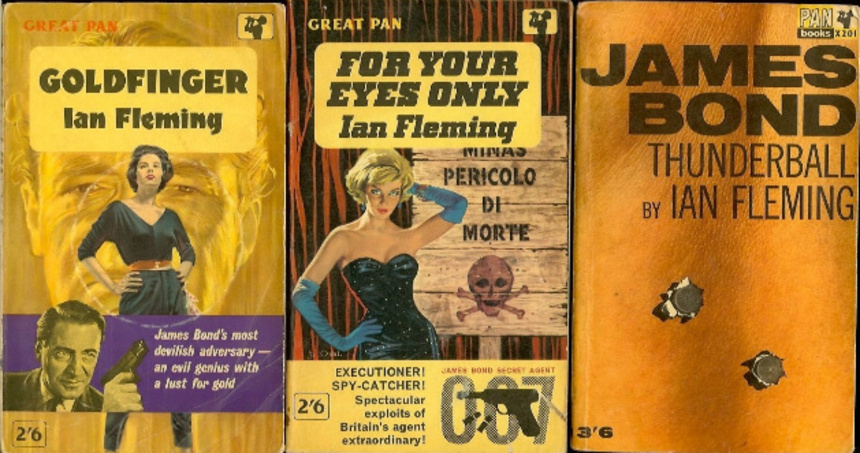 It's tough to watch many of the James Bond movies after reading the novels. Rather than simply a suave killing machine, Ian Fleming's Bond was a more troubled, complex character, capable of genuine fear, stubborn determination and surprising humor, and who often felt regret and exhaustion in response to his violent lifestyle.

The Daniel Craig incarnation of the series seems to be striving to get back to this hard-edged Bond, and Skyfall director Sam Mendes has even spoken at length about the inspiration he took from Fleming's novels. I've already addressed some of my favorite surprising Bond characterizations from the books, but, with all of this talk about getting back to the source material, now is the perfect time to explore some of the more elegant, intense and occasionally insane action set pieces in Fleming's novels, which never made it into the films.

Make no mistake: while they've eschewed character development, the movies have excelled at delivering some amazing and suspenseful action sequences, often adapted directly from the novels, then juiced up to satisfy audience expectations. But lurking in Fleming's pages is a wealth of untapped material at which screenwriters might want to take a second look.
License to Kill, for example, borrowed several scenes and details from already-filmed Bond books, including Felix Leiter's shark encounter, which originally appeared in the novel Live and Let Die. So, here are seven more sequences that seem ripe for the big screen. It should go without saying, but book and movie spoilers abound from here on out. And of course, feel free to chime in with your own favorite scenes that I may have missed!

1. From Russia with Love - James Bond vs. Killer Knitting Needles

Bond's hand tightened on his gun. He glanced down at the bag of knitting, at the shapeless length of the small-denier beige wool the woman was working on. The steel needles. What was there odd about them?

From Russia with Love was one of the most faithful adaptations of Fleming's novels, and yet, there are several great details that were curiously changed for the film. Some details, like the the fact that the Romany women who fight do not wear tops in the book, probably would have sacrificed the PG rating the studio wanted. But others, like the fact that Red Grant attempts to kill Bond with a copy of War and Peace that is actually a gun, are a bit more puzzling.

The biggest missed opportunity comes at the end. In the film, the sadistic Russian Rosa Klebb  comes into Bond's hotel room disguised as a maid and attacks Bond with a poison-tipped shoe dagger. Bond disarms her quickly and moves on with his life. In the book however, there is more suspense, a more interesting weapon, and a cliff-hanger ending.

Having survived the train-ride from hell, Bond shows up at the hotel room where he's heard Klebb is meeting her operative. Instead of a ruthless master of torture, he finds a polite old lady. He begins to suspect he has made a mistake as he examines the woman closely, which leads to this priceless description: "It was an ugly face, toadlike, under the powder and under the tight cottage-loaf of white hair."

Right as Bond realizes that all isn't as it seems, the old lady pounces and attacks him with her knitting needles, which are tipped with deadly poison. Caught off guard, Bond still manages to subdue her, but not before getting pricked by one of the deadly needles. The last line of the novel reads: "Bond pivoted slowly on his heel and crashed headlong to the wine-red floor." The beginning of the subsequent novel, Dr. No, explains the long-ensuing rehabilitation Bond goes through to beat the poison.

2. From a View to a Kill - Motorcycle Assassin

"Twenty yards behind him, the man with the gun took both hands off the handlebars, lifted the luger, rested it carefully on his left forearm, and fired one shot."

The film View to a Kill took nothing whatsoever from Fleming's original short story, except for 5/6 of the title. It's understandable, since most of the story plays out as a low-key mystery in the French countryside. However, the opening of the story, in which a disguised man on a motorcycle murders a government messenger, also on motorcycle, is a tense, nail-biter of a scene that reads like it's right out of one of the best thrillers from the 70's.

In it, a sinister man perfectly dressed as an official government messenger speeds down a country road on a motorcycle. Despite his uniform, it's clear from the way he continues to examine his luger pistol that something's not right.

Then, in the distance, another motorcycle approaches. As the two vehicles near each other, it becomes clear that the man in the distance is an unsuspecting, legitimate messenger, thrilled to see one of his colleagues on the road during his early morning secret code delivery.  Then, moments after he raises a cheerful salute, the gun is fired and "the young man's hands whip off his controls and meet across the centre of his backward-arching spine."

It's an understated scene for sure, but it could be dynamite as a tense burst of violence with gorgeous scenery in the hands of a good director.

3. Risico -- Landmines on the Beach

Then, from the sand-dunes came the deep roar of an explosion. Earth and scrub and what might have been bits of man fountained briefly into the air...

For Your Eyes Only borrowed liberally from this story and several others in the same collection, but it neglected to use one of the most cinematic scenes Fleming has ever written. It begins when Bond goes to meet the girlfriend of a suspected crime boss on a deserted beach in Venice. Not surprisingly, three ominous figures with guns appear in the distance.

Thus begins a pulse-pounding foot chase across a completely deserted beach in Venice, with Bond grappling as much with his own endurance as with the men flanking and closing in on him from behind. Then suddenly, an explosion! I cannot for the life of me remember why, but for some reason this specific beach is littered with land mines. Only one person blows up in the story, but I'm sure Hollywood could take this striking image a couple steps further.

4. You Only Live Twice - James Bond vs. The Garden of Death

For those wanting a "darker bond," look no further than Fleming's most somber novel, You Only Live Twice. No ninja armies or rocket guns here, just a worn-out Bond grappling with revenge and mortality. Not only is Bond mourning the death of his one-time wife, Tracy, from the end of On Her Majesty's Secret Service, but Fleming himself was writing the novel, the last published during his lifetime, after recovering from a near-fatal heart-attack. Death and mortality ooze out of every page.

The dark themes and the characteristically absurd megalomania perfectly merge in the "Garden of Death." The Villain of the novel, Dr. Shatterhand (why hasn't a movie used that name yet?), uses this name for his palace, which he holds as a shrine to suicide. People journey from all over the world to kill themselves here, and Shatterhand keeps it well-stocked with poisonous plants and animals to help them out. The palace itself doesn't pose as much of a direct threat to James as you'd expect, but when as he watches two visitors take their own lives, his ensuing reactions show that it's really Bond's already fragile psyche that's at stake this time around.

He caught a glimpse of tiny claws hooked through the mesh and of dozens of thick, furry feet, and of furry sack-like stomachs topped by big insect heads that seemed to be covered with eyes.

Critics turned on Ian Fleming when he published Dr. No. While reviews for his previous novels had been mostly positive, this one was met with vicious attacks as critics complained that Fleming had traded in fun for relentless sadism. Their vitriol was certainly an over-reaction, but it is true that there's a fifty page stretch of Dr. No that reads like a novelization of Saw.

Here, No sets Bond loose on a deadly obstacle course where Bond is electrocuted, burned, frozen and bashed around -- All to test the human threshold of fear and pain. The film includes a bit of this section, but it never pits Bond against the hoard of tarantulas that he has to fight off in dark, tight quarters with nothing but a wire-spear of his own construction. From the moment where Bond flicks his lighter and realizes the magnitude of the situation to the stomach-churning conclusion where he crawls across the "sickening mess of blood and fur," this passage is the stuff of nightmares.

'This island is called Crab Key. It is called by that name because it is infested with crabs... They march in armies of hundreds at a time. They march through everything and over everything. In Jamaica, they go through houses that are in their path. They are like the lemmings of Norway. It is a compulsive migration.' Doctor No paused. He said softly, 'But there is a difference. The crabs devour what they find in their path.'

Yep, while Bond gets a torturous obstacle course, Dr. No's plans for Honey Ryder consist of tying her to the ground, naked, and releasing thousands of crabs to devour her. The book never really gets into detail about this sequence, but the idea itself is far more memorable than Dr. No's attempt to drown her in the film version. Apparently, a similar scene was in the script, but all of the crabs they planned to use for it died while being shipped to the island. Poor crabs.

Like a huge slimy caterpillar, the tentacle walked slowly up the leg. It got to the bloody blistered kneecap and stopped there interested. Bond gritted his teeth with the pain. He could imagine the message going back down the thick tentacle to the brain: Yes! It's good to eat! And the brain signaling back: then get it! Bring it to me!

The coup de grâce of Dr. No's deadly obstacle course is indeed a giant squid. Bruised and battered, Bond fights it off with only a small knife and his homemade spear. He narrowly beats the squid, but it gets the last laugh when it douses bond in Ink before escaping. I really can't emphasize how much I'd like to see James Bond fighting a giant squid in a movie.

Tentacle Bonus: Bond also fights an octopus (among other sea creatures) during his perilous scuba diving trip to an exotic island in Live and Let Die.