ScreenAnarchy In Bondage: Why THE SPY WHO LOVED ME is the Perfect Bond Film 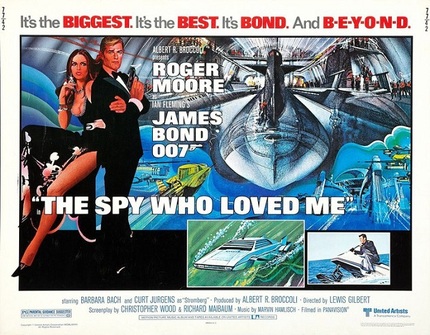 The Internet, and media platforms across the board, have been ablaze the last few weeks in the run-up to the release of Skyfall, the 23rd official installment in the James Bond series of spy movies. The film has received incredibly high praise, both for its comparatively dense, character-focused narrative and yet another impressive turn from Daniel Craig as the battle weary secret agent. The reception to Skyfall has been so strong, in fact, that it has caused more than a few to label it as the best Bond film of all time, and there has been increasing momentum backing Daniel Craig's bid to usurp Sean Connery as the best screen Bond ever.

Unsurprisingly this has caused every man and his exploding pen to weigh in with their personal favourite of the series, and - as Christopher Campbell nicely cobbled together in his recent piece on Movies.com - there seem to be two clear winners - Guy Hamilton's Goldfinger from 1964 (Third of the series, and for Connery) and Martin Campbell's 2006 reboot, Casino Royale (21st in the series, and Craig's first). While I could launch into the reasons why I disagree with both of those choices (there's a whole other article in why Goldfinger is in desperate need of being reassessed), instead I will state my case for the film I am convinced is the best Bond film to-date: Lewis Gilbert's The Spy Who Loved Me from 1977.

I grew up with James Bond. As an impressionable young lad from the South East of England, born into a comfortable middle class family and who shared his first name with Great Britain's finest gentleman spy, it was unsurprising I gravitated towards the Bond films. I honestly can't remember which was the first I saw, or when I saw it. The Bond films have always been a part of my life - and certainly by the time John Glen's A View To A Kill opened at the ABC in Swindon in the summer of 1985, I was all caught up and desperate for my mother to take me to see it. When I finally did, I was far from disappointed. As a hopefully more discerning 35-year-old, I shake my head at my 8-year-old self, but I loved A View To A Kill. But that said, despite the improvised snowboarding, the wheezy chase up the Eiffel Tower and the incessant deranged giggling of Christopher Walken's Aryan microchip baron, Max Zorin, it wasn't my favourite.

The Spy Who Loved Me, which opened the same year I was born, is the perfect Bond film. It literally has everything. Were you to compose a checklist of elements that absolutely must appear in a James Bond film to make it so, they are all present and correct in Spy. Not just that, but in almost every instance, they are the best example of each trait that the series has produced. The film opens with a jaw-dropping pre-title credit sequence, which sees Bond (actually Rick Sylvester) ski off the precipice of Mount Asgard in Canada's Northwest Territories (doubling for Austria), only for a Union Jack-emblazoned parachute to open, accompanied by the blaring trumpets of Monty Norman's seminal theme. It was not until Goldeneye in 1995 that a pre-title sequence would come close to rivaling Spy for sheer audacity, and that film required two stunts, both of which are essentially riffs on Sylvester's BASE jump, even to compete.

The sequence is followed by one of the Bond series' most enduring theme songs, Carly Simon's Nobody Does It Better, before launching into a Cold War plot that ups the stakes of You Only Live Twice. Instead of rockets, Spy sees a nefarious megalomaniac start hijacking nuclear submarines, from first the British, then the Soviet navies. When the tracking system used pops up on the black market in Cairo, M sends Bond to Egypt, where his path crosses that of Major Anya Amasova (Barbara Bach), aka Agent XXX of the KGB. The two countries form an uneasy alliance, with Amasova proving - at least to begin with - the most feisty, resourceful and independent Bond girl the series had yet seen. She was also drop dead gorgeous, and harbouring a personal grievance that would see her relationship with Bond come to a vengeful head later in the film.

The villain, reclusive billionaire Karl Stromberg, fits the Bond nemesis mold perfectly - rich, eccentric, murderous and hell-bent on a typically bonkers plot for world domination. Using his newly acquired nuclear subs, he intends to destroy both world superpowers and begin a new life for himself and the rest of humanity...under the sea. Quite how his technically impressive, but relatively small submersible lair, Atlantis, will accommodate the entire population of the planet is never fully explained, but that's part of what makes his plan so ludicrous, and by extension, so dastardly. In the meantime, he needs to clean up the mess of the missing tracking system. So naturally, he blows up the two scientists that developed it, feeds the girl who stole it to his pet sharks - courtesy of a trapdoor in his private elevator - and sends metal-mouthed assassin Jaws after the microfilm.

Forget Red Grant, Odd Job, or even the diminuitive Nick Nack, Richard Kiel's hulking, silent and extremely deadly Jaws is the greatest Bond henchman of the entire canon. He dwarfed Roger Moore, who at 6' 1" hardly cuts a slight figure himself, bit through metal chains, tore a van to pieces with his bare hands, and eventually wins out in a scuffle with a couple of hungry sharks. Jaws was awesome, and proved so popular, that he was brought back for a second round in the succeeding film, Moonraker - the only time a villain besides Ernst Stavro Blofeld himself has ever returned!

While the series had ventured below the waves in the past, most notably in 1965's Thunderball, nothing could compare to the sheer scale of The Spy Who Loved Me. At the time of its release, it was the most expensive film of the series, costing US$14 million, and the ambitious production design work of Ken Adam demanded that an entire new soundstage be built at Pinewood Studios - which is still called the 007 Stage to this day. But it was not the behind-the-scenes drama that attracted me to the film, but the action up there on the screen. Not only did Stromberg have a giant supertanker, the Liparus, whose bow could open up and literally swallow submarines whole, but James Bond's car could go underwater!! Say what you like about the Aston Martin DB5 and its ejector seat, Bond's brilliant white Lotus Esprit turned into a submarine! It's wheels folded in, it could drop mines to deter attacking divers and it could even shoot down helicopters!

The reasons why The Spy Who Loved Me is the perfect Bond film just goes on and on. He skis backwards while shooting people with his customized ski-pole rifle, he walks into a room, meets a beautiful woman who immediately throws herself at him, only for Bond to use her as a human shield from a hidden gunman - all within the space of about 15 seconds. He rides a camel, a jet ski and diffuses a nuclear bomb. He fights Jaws on a train - a series staple - in the ruins of Karnak Temple in Egypt, electrocutes him in the mouth and ultimately outwits his colossal opponent by using a giant magnet! Bond has to deal with other goons and henchmen too, most notably egg-headed Sandor (Milton Reid), whom he mercilessly lets fall to his death, all the while keeping his demeanour cool and eyebrow cocked.

Many detractors will instantly back away from The Spy Who Loved Me because it stars Roger Moore, and while I don't think it's his best performance as 007 - for that, watch the harder edged For Your Eyes Only - here he strikes the perfect balance between action hero, debonair British gent and cheeky womanizer. Moore's interpretation of the character may well be a far cry from Ian Fleming's original Bond, but what Moore brought to the character and developed during his tenure did as much good for the character as harm. There is a case to be made that Moore was already too old to play Bond when he landed the role in 1971, and by 1985 was making a mockery of the whole franchise, but right here he gets the balance dead right, which in turn feeds an incredibly playful onscreen chemistry with Bach's Amasova.

What else is there to say about this film? It is huge in scale, lavish in its design, fast-paced, sexy and exciting throughout. It perfectly captures the mood of the period, while staying true to the Bond legacy and in many cases besting the familiar tropes that make the Bond series unique. It opens huge and just gets bigger as it goes along, ending with perhaps the ultimate example of the nookie bust/innuendo punchline, as M and General Gogol peer into the escape pod, only for Bond to quip that he's "keeping the British end up, Sir." As Carly Simon so eloquently states in the film's theme song, nobody does it better than James Bond, and for my money, Bond has never done it better than in The Spy Who Loved Me.