ScreenAnarchy In Bondage: Our Favorite Bonds 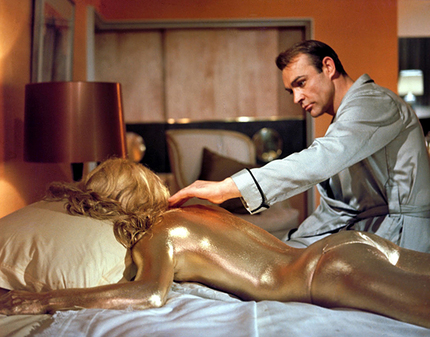 The task: to reveal your favorite among the 22 Bond films. The rules: keep it to two sentences. That was the challenge set before my fellow ScreenAnarchy writers recently and they seized it with gusto.

Curating this list, I noted a couple of things: there were no overwhelming favorites, no particular title that everyone gravitated towards. Nostalgia also played a large factor in some choices, with an uneven (or admittedly outright bad) entry making the list out of some kind of wonderfully revealing personal attachment.

So without further ado, let's have our Managing Editor Peter Martin kick things off with his entry, Goldfinger.

Brian Clark: When I was very young, I liked You Only Live Twice, mostly because it had ninjas. When I got older, I realized that Roald Dahl wrote the screenplay, which only solidified my belief that it's the best James Bond film.

Ryland Aldrich: Long live Lazenby! On Her Majesty's Secret Service is my favorite Bond movie because it has the most outright fun. 007 is always a playboy, but George Lazenby's Bond takes the promiscuity to new levels. Partly a product of it free-love-60s 1969 release date, there is a sense of levity to the sixth Bond film that makes you smile all the way through. Couple that with the amazing high Alps villain hideout and you have Bond at his very best.

Sean Smithson: The Man With The Golden Gun was the first Bond film I ever saw in the theaters, with the "horror kid" in me being drawn by screen presence of Dracula, aka Christopher Lee, in the role of Scaramanga, my childhood hero who was already locked into my cinematic DNA via hours and hours of watching Hammer Films on Creature Features. The sinister tone, and the inclusion of a seriously creepy Herve Villachiaze as Lee's tiny but lethal henchman Nick Nack locked me in as a fan of the 007 franchise for life, a freak flag I still find joy in waving.

James Dennis: Roger Moore's 1977 outing was an easy choice; this from the perspective of a highly impressionable 8 year old (or thereabouts) living in rural England and raised on a diet of Moore-era Bonds seen with excited eyes on a crappy little 14 inch TV. But that's the point really--the Moore Bonds were simply the best kids' movies ever, packed with all the elements needed to relieve even the most ingrained pre-pubescent boredom, and The Spy Who Loved Me was the pinnacle.

James Marsh: Roger Moore pitched Bond perfectly between cheeky chappy and brutal misogynist here, while the film itself kicked off its outrageous plot of world domination with a phenomenal base jump off Mt. Asgard, sent 007 to Egypt with Barbara Bach's feisty Soviet agent, introduced the sexy Lotus Esprit submarine, the less sexy Richard Kiel as metal-mouthed Jaws, Ken Adam's staggering production design and, of course, Carly Simon's phenomenal theme tune. She was right back then in 1977, "Nobody Does It Better" than James Bond, and for my money, Bond's never done it better than in The Spy Who Loved Me.

Ard Vijn: It was the first one I saw, at age twelve: young enough to be blind to what was crap about it (story bridges) and old enough to appreciate what was cool about it (which was plenty).

Rachel Fox: The first Bond that resonated with me was Octopussy--my mum is Indian, and I loved all the decor and in 1986 (I was 8) I stayed at the Shiv Niwas palace in Udaipur, India, where the film was shot, where I slept in the room in which Maud Adams elegantly tumbled off the balcony via an unraveling sari. That was a big deal to me, and for nostalgia reasons, Octopussy wins.

Swarez: I hold A View To A Kill up as favorite even though I know it's pretty bad. But it has a Duran Duran theme song, it was the first Bond film to shoot a segment in Iceland [Ed. Swarez is an Iceland native], and Grace Jones looked sexy in a dangerous kind of way.

Kurt Halfyard: The last of the true Cold-War themed 007 adventures finds James Bond (a gruff Timothy Dalton gives a more "novel" take on the character) sporting a Keffiyeh and helping the Afghan-Mujahideen (who years later would morph into the Taliban) sell half a billion dollars of opium before foiling a renegade American-Soviet arms dealing scam. A benchmark amount of globe trotting, from high to low culture, A concert in Czechoslovakia to military safe house in the United Kingdom to sparse barracks in Afghanistan to Moroccan Mansions, with a rogues gallery of villains, a plethora of double crosses and Bratislava blonde companion. What more could you possibly want in a 007 adventure?

Joshua Chaplinsky: It's the best Bond film for all the same reasons people think it's the worst: it's dark, violent, and deadly serious (winking fish-fountain aside). Long before Daniel Craig made Realistic Bond the Bond du jour, 12 year-old me was buzzing off the bloody trail Timothy Dalton blazed.

Juan Espinoza: My love from movies actually comes from renting VHS tapes, but The World is Not Enough was my first time going to a movie theater with my younger sister after we both ditched school to watch it. I know is not the best Bond, but is always takes me back to my younger days!

Shelagh M. Rowan-Legg: Because within five minutes, Daniel Craig made me forget every Bond that came before him and owned the role, adding a deeper emotional and psychological resonance to the character while maintaining the tradition of Bond action and power. And because superb narrative, direction and editing leaped the series into the 21st century with a bang and just a hint of irreverent whimsy.

Jason Gorber: The "rebirth" with Craig could have gone badly, but to the credit of all involved Casino Royale proved to be the direction I wanted that character to follow. We've lost some of the sizzle (and misogyny) of the earlier works, but for my money the rest of them are just precis - Bond began to be unequivocally great with the Craig era, the others are fun for reasons of nostalgia or kitsch.

Ben Umstead: When I think of James Bond, what comes to mind is a visceral ruthlessness equally, though precariously, balanced with a suave ingenuity. Not only exemplary of Bond the man, these elements permeate throughout the entire 007 universe, and for me they never come together more beautifully than they do in Quantum of Solace, and most notably in the bone-crushing, bullet-blasting bravado of the Tosca Opera sequence.