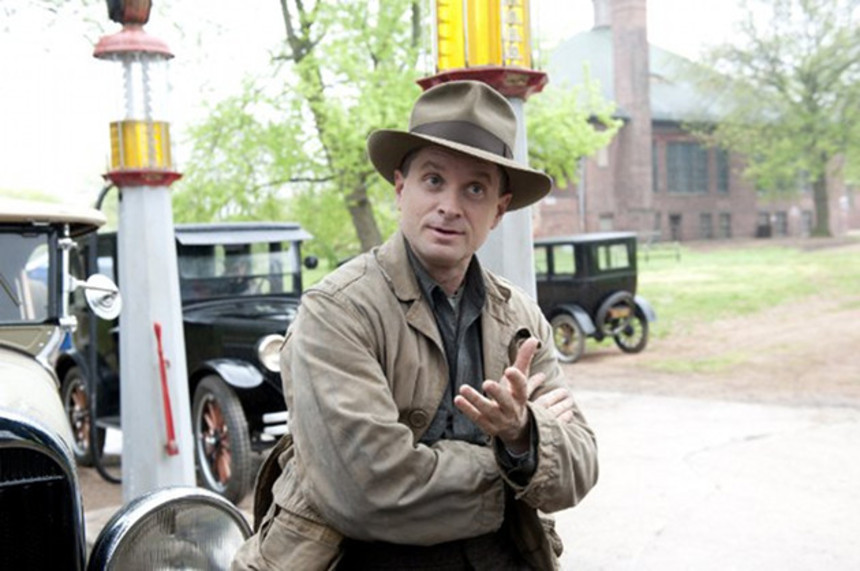 It's not exactly news at this point but it is becoming increasingly clear that the Nucky Thompson of this latest season of Boardwalk Empire is a world apart from the Nucky Thompson of seasons one and two. The one-two punch of being betrayed by both his own wife and his one time protege Jimmy Darmody - who he executed by his own hand - has left Thompson permanently changed. The one-time merry crook - in love with his image as a gentleman man about town - has been replaced by a man isolated and alone, insecure in his solitude, and increasingly ruling by fear. Woe to anyone who gives Nucky reason to mistrust him. And, by the end of this episode, that clearly seems to mean woe to Mickey Doyle.

The main plotline this week follows Nucky himself as he and sideman Owen - whom Nucky is becoming increasingly abrupt and distrustful of - finally track down Roland, the thief they were tipped to all the way back in episode one. And Roland is not at all what they expect. A brash youth still in his teens, Roland has a house absolutely jammed with liquor - some of Nucky's, some lifted by Waxy Gordon. He also has a sharp mind and playful spirit - exactly the sort of qualities that the old Nucky would have found endearing. He also happens to have a squad of Feds at his door - a factor that forces Nucky, Owen and Roland to shelter together in the cellar for a solid twenty four hours while they wait for the Feds to leave.

This, effectively, leaves Mickey Doyle in charge of the operation. And Mickey, in case you've forgotten, is an idiot.

Remember, please, that Nucky's previous shipment to Arnold Rothstein was intercepted in Tabor Heights by Gyp Rosetti, who lit the local sheriff on fire to bring the rest of the locals in line. Nucky certainly remembers this, which is why he ordered Mickey - in front of all of the staff - to avoid the Tabor Heights shipping route and use back roads only on future shipments. Eli remembers, too, his own history in law enforcement giving him a healthy mistrust of the new Tabor Heights' sheriff's assurances that everything is under control and Rosetti will be taken care of. But Doyle? Well, when Doyle gets an angry call from Rothstein he - of course - sends everything back through Tabor Heights. It goes about as well as everyone other than Doyle expected it would, meaning I fully expect Doyle to be dead very soon and Eli elevated back to his former position as Nucky's right hand.

Perhaps reflecting Nucky's own sense of isolation, the rest of the storylines in the show continue to roll out largely independent of one another. No Gillian Darmody, Chalky White or Nelson Van Alden in this one, but Lucky Luciano attempts to put out a territory conflict regarding his fledgling heroin operation in New York without much success. Margaret moves ahead with her new women's clinic in the Atlantic City hospital. But the best side moments - indeed, the best individual moments of the episode - belong to Al Capone, with some tender moments balancing out his relationship with his deaf son, who is being bullied at school, and the sudden, violent escalation of his turf fight with Dion O'Banion.

While its easy enough to see the larger web of connections within most of the primary storylines - Rothstein clearly links Thompson with Luciano and his New York crew, to say nothing of Luciano's connection to Gillian Darmody, while Capone is simply Capone and therefor a huge figure within this criminal underworld - the show very badly needs to find a way to reintegrate Margaret back into the main story, and soon, or risk having her spin off into irrelevance. Margaret provides an interesting social commentary on gender relationships at the time - as Chalky White does for race relations - but unlike Chalky, Margaret has now been pushed completely to the sidelines. She's not currently a factor in Nucky's life at all, nor does her clinic have any bearing on the rest of the story at all. She's a fascinating character who has been brilliantly performed but right now she's of no consequence to the larger narrative and hopefully that will change soon.

Oh ... and Roland? Let's just say Nucky's about to repeat the mistakes of Jimmy Darmody.